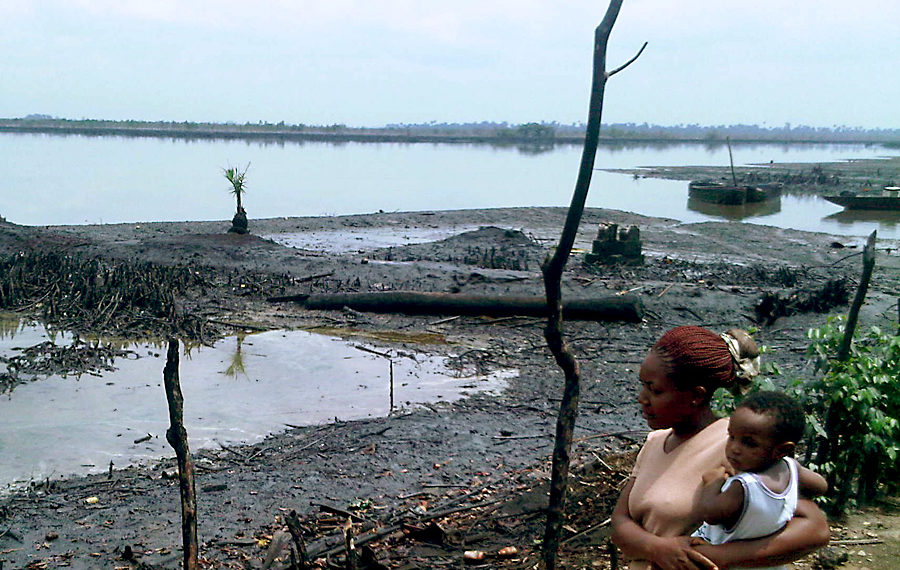 ANALYSIS: 77% of oil spills in Nigeria occurred in only three states

Between January 2019 and April 2021, 12 states in Nigeria recorded 881 cases of oil spillage, according to data obtained from NOSDRA, a government-run satellite tracker.

The states with the highest FAAC earning from the 13 per cent oil derivative (and technically highest oil production) from 2018 to 2020 were Delta, Akwa Ibom, Rivers and Bayelsa states respectively.

The total spillage reported within this period amounted to about 43,000 barrels of oil, worth over $3 million (at $70 based on the May 5 crude price in the international market), which is equivalent to N1.23 billion (at N410 to a dollar).

Using the 2018 Constituency Project Report by civic organisation BudgIT, this amount can build three classrooms of four blocks (at N8 million each) and drill three solar-powered boreholes with 100,000 litres capacity tank (at N25 million each) in each of the twelve states.

The NOSDRA tracker said the data is fluid and changes “on an ongoing basis” as new spills are reported. The quoted toll is as of May 1. NOSDRA only has records of the state-by-state breakdown for the past three years.

Rivers, Delta and Bayelsa had the most cases of oil spillage during the period. While Rivers State had 352 spills, Delta State had 233 cases and Bayelsa was third with 89. 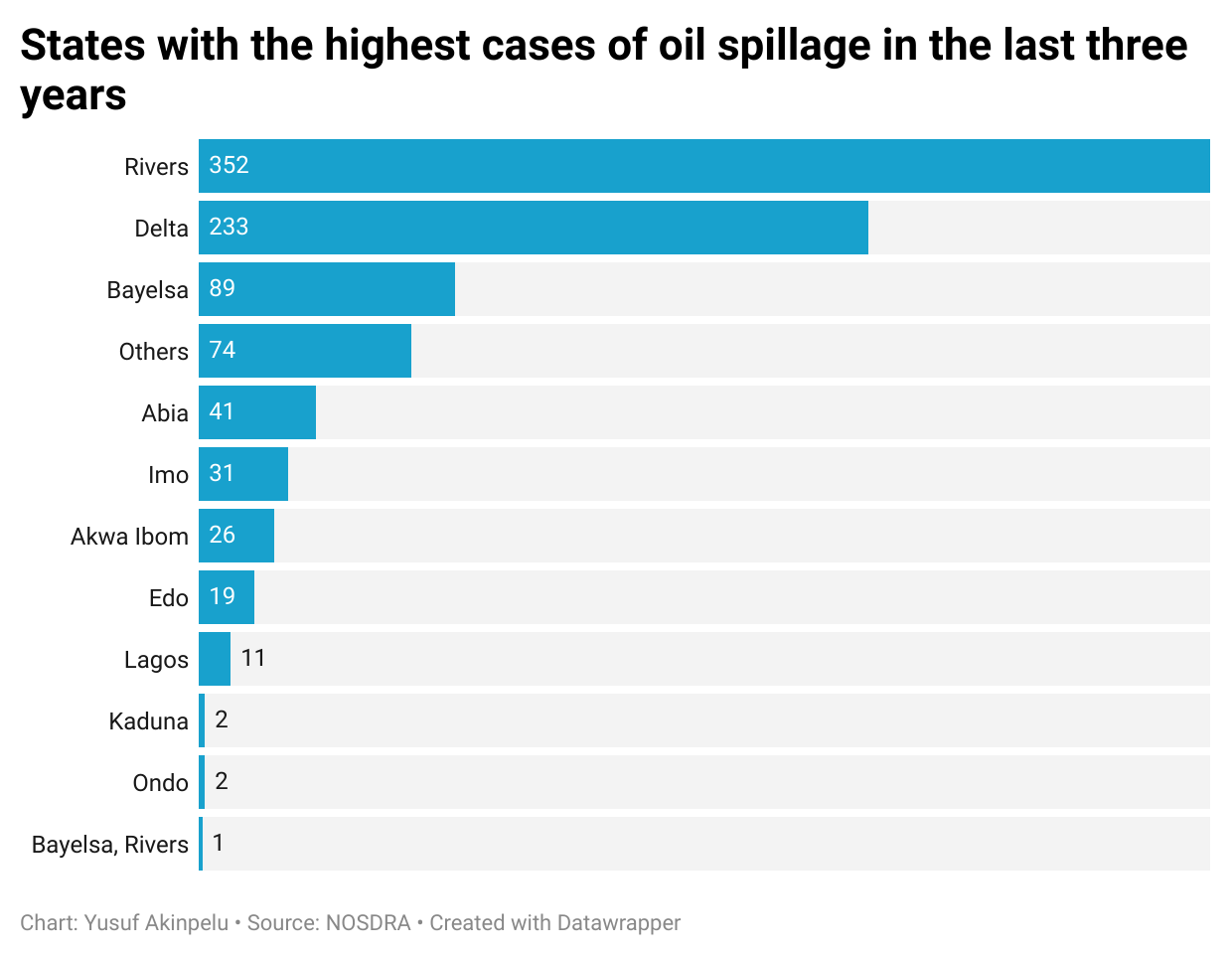 In terms of volume, the spills amounted to about 26,268 barrels lost in Rivers State; 9,134 in Delta State; and 1,219 in Bayelsa State, according to the tracker. 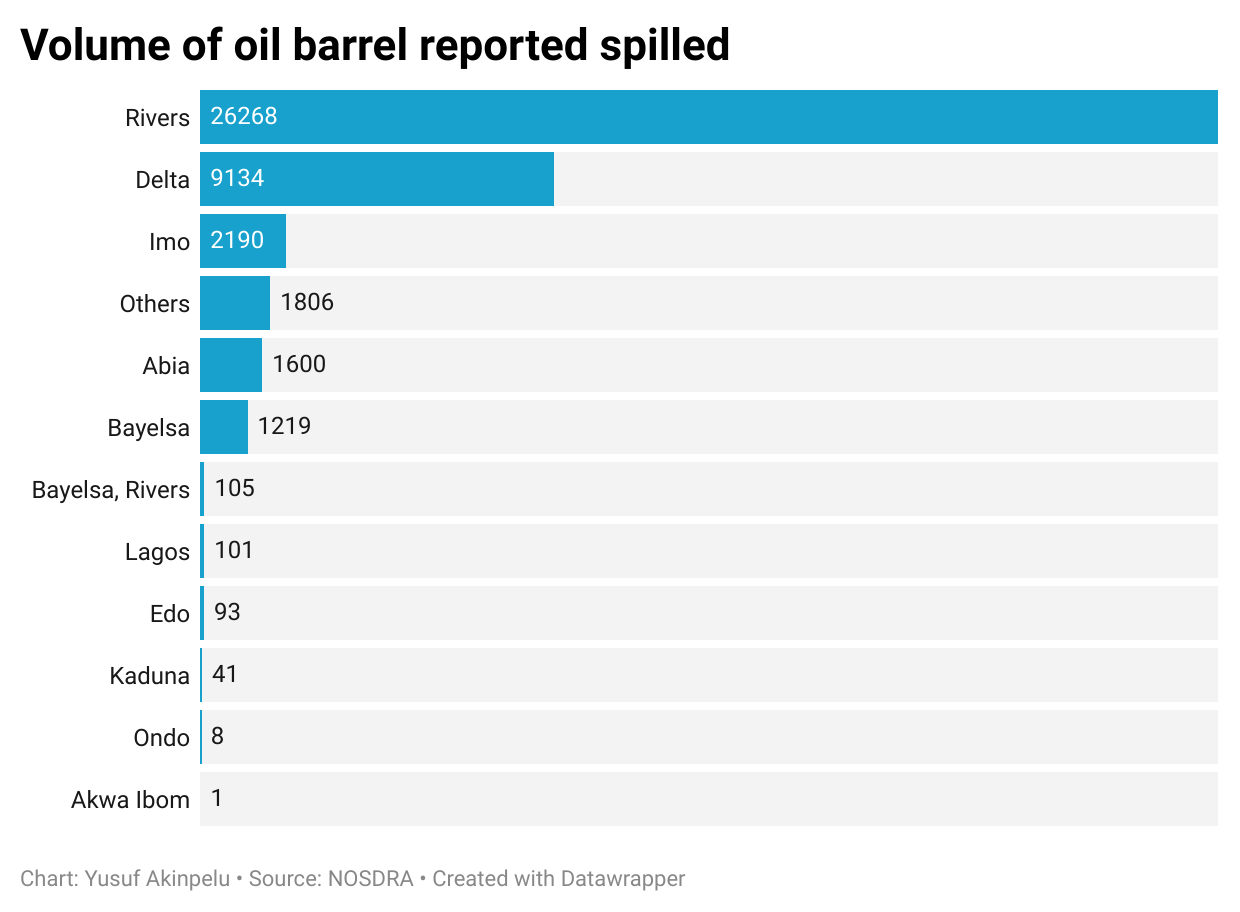 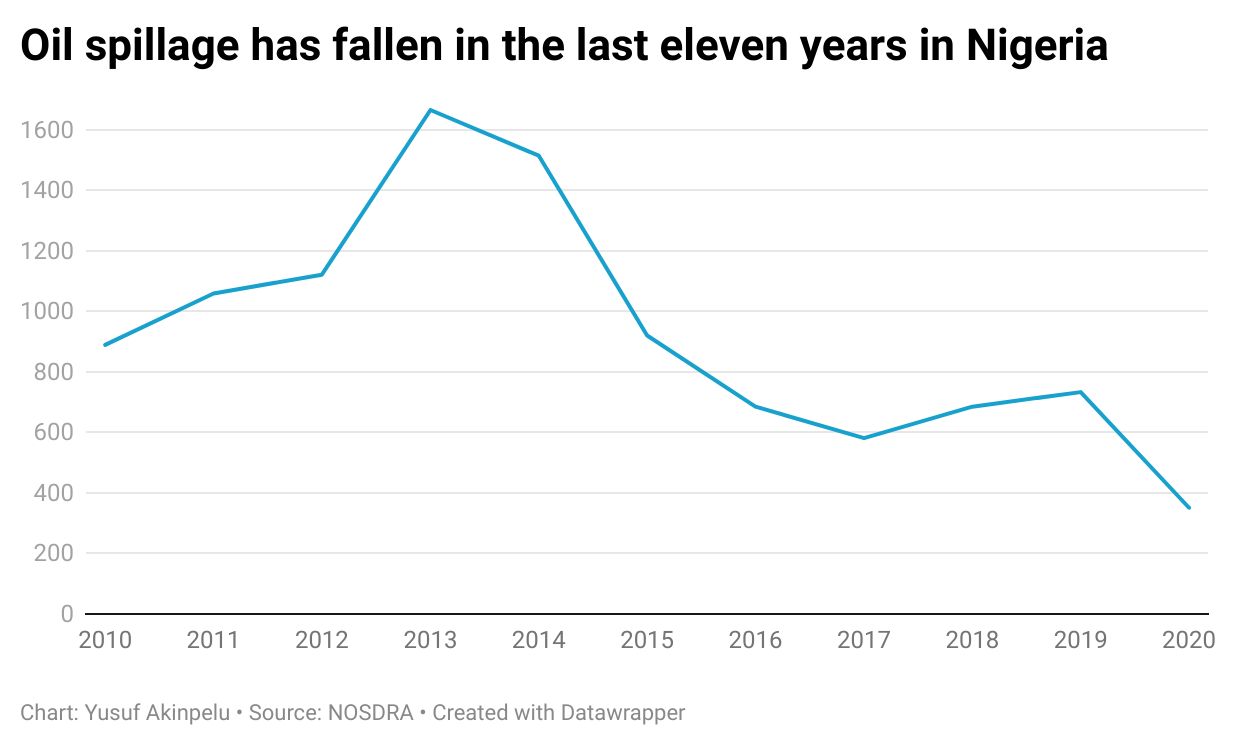 Around 70 per cent of the spills recorded by NOSDRA in the past 11 years were as a result of sabotage and oil theft, also known as bunkering, a review of the tracker by this newspaper showed.

Oil theft not only deals a huge blow to the nation’s pipeline facilities, but it also contributes a massive drain on the country’s finances and causes pollution.

A PREMIUM TIMES analysis had found that a total of 1,161 pipeline points were vandalised across Nigeria in the 21 months between January 2019 and September 2020.

According to figures mined from the monthly financial reports of the nation’s public oil company, NNPC, this has a huge toll on the nation’s oil revenue.

From January 2019 to January this year alone, repairs of the pipelines and other facilities came at an outlay of about N15 billion, this newspaper found.

Data from NNPC’s monthly FAAC reports from December 2019 to January 2021 showed that the company spent a total of N59.1 billion on the repair and management of the pipelines in about one year.

By law, oil companies must close off oil spill sites within 24 hours of being notified of an oil spill on their fields.

After this is done, a Joint Investigative Visit (JIV) is launched to determine the extent of the spill. The team is usually made up of representatives of the affected community, that of the oil company, and relevant government agencies.

The purpose of the deployment is to determine, among other things, the cause, impact, and scale of the spill. Each party is required to sign a JIV document in case of a legal hearing or compensation.

Within two weeks of a confirmed spill, oil companies are mandated by the law to submit the details of the spill information filled in a document called FORM B to the regulatory authorities.

When the clean-up is deemed completed, reports of the clean-up operations are to be filled in another FORM C which will be submitted to the regulatory agency.

Oil companies whose facilities are breached always take responsibility for oil spill clean-up, whether the spill was due to their own operational fault or oil theft by members of the host communities.

However, they are required to pay compensation to the affected local communities affected if the spill was the company’s fault.

Contrary to what the law stipulates, some 1,948 (which is about 20 per cent) of the oil spill sites recorded in the last 11 years were not visited by a joint investigation team, data shows.

Aside from bunkering and oil theft which are potentially lucrative businesses for criminals, oil spills have thrived due to the inaccessibility of some oil spill sites. This is not helped by the presence of armed criminals involved in illegal refining around these sites.

Even though incidents of oil spills are to be reported within 24 hours, some go unreported due to the vested interest of the party responsible for the oil spill as they will be required to clean it up and provide compensation.

Likewise, there have been reported cases of affected local communities denying spill clean-up teams or regulators access to spill sites.

Suspicion and mutual distrust among oil companies, regulatory agencies and local communities (some of which may be hiding their illegal refining facilities) have not helped this too.

(Support for this report was provided by the Premium Times Centre for Investigative Journalism (PTCIJ) through its Natural Resource and Extractives Programme).

The Eddie Madunagu Factor In the Nigerian Left, By Lanre Arogundade