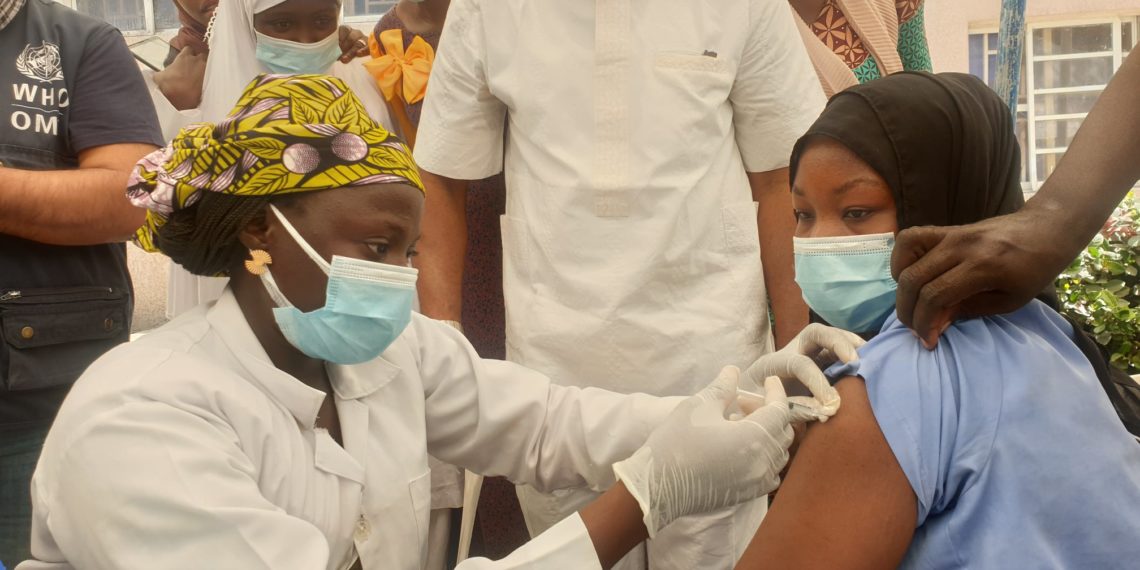 Why Nigeria may not meet its COVID-19 vaccination target

Nigeria needs to vaccinate about 78.8 million people in the next seven months to meet its target.

About two months after it rolled out one of Africa’s largest COVID-19 vaccination programme, Nigeria has administered only 1.2 million vaccine shots, less than two per cent of a target it set for the end of the year.

To achieve herd immunity against COVID-19, Nigeria had set an ambitious goal of vaccinating 40 per cent of its over 200 million population before the end of 2021, and 70 per cent by the end of 2022.

“About 70 per cent of the total population needs to receive the COVID-19 vaccines to completely eradicate the virus,” the Executive Director of the National Primary Health Care Development Agency (NPHCDA), Faisal Shuaib said in January ahead of the vaccine rollout.

To vaccinate 40 per cent of Nigeria’s 200 million citizens means 80 million people would have received their full doses by the end of the year.

But with only 1.2 million vaccinated two months into the campaign, Nigeria needs to vaccinate about 78.8 million people in the remaining seven months of 2021. Also, most of those already vaccinated are yet to get their second shots.

Health experts say the rate at which the vaccines are administered is a “drop in the ocean” and will do little towards reaching the 80 million target for this year.

According to the NPHCDA, about 1.2 million people have received their first shots so far, more than half of the targeted priority groups in the first phase.

Going by the current vaccination pace, however, less than nine million people would have been vaccinated in Nigeria by the end of 2021. The figure is less than 15 per cent of the 80 million citizens targeted.

Health analysts say they expected a rush in the first phase of the rollout considering that the priority groups – health workers and other frontline workers – can easily be located.

“Instead, what we are seeing is a snail-pace start”, said Ikemesit Effiong, a forensic health expert with SBM Intelligence. “This is more worrisome because even health workers appear to be reluctant to take a jab. At this rate, it’s most unlikely for us to meet the target.”

PREMIUM TIMES reporters recently visited some vaccination centres in Abuja and witnessed a poor turn out.

Between 12 noon and 3:00 p.m. on a Tuesday at the vaccination centre inside the National Hospital, Abuja, less than15 people queued up at a time even though the process was seamless and hitch-free.

Also, most of the people on the queue – including a young athlete, a bank worker and a businessman – are not categorised under the vaccination priority groups.

At least five health workers at the facility told our reporters they are yet to take a jab and expressed reluctance on when they will do so.

Tayo Haastrup, the hospital’s spokesperson, did not give a clear response on why health workers appeared hesitant in taking a jab. He, however, admitted that people from other groups other than front liners are allowed to get their first doses so as to hasten the process and avoid spoilage.

Having received 3.94 million doses of the Oxford-AstraZeneca vaccine through the COVAX facility in early March, Nigeria commenced vaccination beginning with healthcare workers and other priority groups.

Nigeria on March 21 received another 300,000 doses of the same vaccine from telecom giant, MTN. On April 6, the government of India also delivered 100,000 doses of Covishield vaccines to Nigeria bringing the total number of vaccines in stock to about 4.4million.

Due to limited doses of vaccine, the Nigerian government announced it will pause the vaccine rollout once half of the about 4.4million doses in stock are exhausted to forestall stock out when those already vaccinated start coming back for their second doses.

The AstraZeneca COVID-19 vaccine is given in double doses. A person is required to come back for a second shot, about four to six weeks after taking the first jab.

The Minister of State for Health, Olorunnimbe Mamora, had admitted that Nigeria was not sure when the next batch of vaccines would arrive in the country.

“We believe that in a situation where we still cannot specifically determine when the next batch of AstraZeneca vaccines will arrive, then I think wisdom only dictates that it is better for us to vaccinate people fully,” Mr Mamora said in Abuja penultimate Tuesday.

“And so that we can say that we have a pool of citizens that have been fully vaccinated since this vaccination comes in two doses.”

Mr Shuaib said there is a global shortfall of production of COVID-19 vaccines largely due to the manufacturers not meeting their projected targets.

“These developments have now necessitated that we reassess our vaccine supply forecasts and take the decision to ensure that everyone who has taken the vaccine in the current phase gets the second dose before the next consignment is delivered to Nigeria,” he said.

While much attention is channelled to the procurement of vaccines and rollout plan, a problem of mistrust and unfounded misconceptions about COVID-19 vaccines has been allowed to flourish.

Majority of respondents in a recent survey conducted by PREMIUM TIMES said they will let the opportunity for them to get vaccinated pass. Their reasons differ but can be linked to a general mistrust of government policies and its opaque handling of the pandemic.

In a study by a research firm, SBM Intel, in all 36 states and the FCT, only 39.9 per cent of Nigerians said they will take the jabs.

The survey, titled: “COVID in Nigeria – The second wave” and published in January, reviewed people’s perceptions about the existence of COVID-19 and the COVID-19 vaccines.

While 35.9 per cent of the respondents said they will not take the vaccine, 24.1 per cent are unsure of their position yet.

“In interviews with some respondents who are opposed to the vaccine, some held that it is a religious war to contaminate the children of God with evil substances,” the research firm said.

“Some believe that the vaccines are a tool to depopulate Nigeria, while others expressed concern about the effectiveness ratio and the side effects that the vaccine might have. Some were more concerned with the thoughts of being used as Guinea pigs for drug trials.”

For Nigeria to have an effective vaccination campaign, public health experts say the challenge of actually persuading people to get a shot must be addressed urgently.

While there are no known unusual and adverse side-effect recorded among those that received the jabs thus far, many Nigerians are still wary over lingering safety concerns about the AstraZeneca vaccines, especially in Europe.

A week after Nigeria received the nearly 4 million doses of the oxford vaccines in early March, several European countries paused the distribution of the vaccines, following reports that some people had developed blood-clotting disorders after receiving the jab.

The highly unusual combination of symptoms—widespread blood clots and a low platelet count, sometimes associated with bleeding—has so far been reported from at least seven countries, sparking a flurry of suspensions in mid-march.

However, a review of the cases by the European Medicines Agency (EMA) could not say definitively whether the reported cases were linked to the AstraZeneca vaccine, and concluded that the benefits of the vaccine outweigh any risk.

The countries have since resumed vaccinations while Nigerian authorities continue to say the vaccines the country received is a different batch from the ones causing problems in Europe.

Meanwhile, global health bodies have warned health authorities to be on the lookout for the clotting disorder in vaccine recipients and report them.

Prior to the start of the vaccination, the NPHCDA shared a link to a website where citizens are expected to book their vaccination appointments.

A week-long monitoring of the webpage revealed that people from other groups other than the priority group in first phase of the rollout can also register and be scheduled for vaccination.

There were no restrictions around the vaccination dates available to different population groups or around who is able to register. The registration process also does not provide any means for the government to verify those claiming to be front-line workers.

Some Nigerians who registered on the platform complained they had to register twice after their details could not be verified at the designated vaccination site.

Also, the online process can be described as “elitist because many Nigerians especially in the rural areas are not internet savvy and therefore could find the process cumbersome”, Jerry Oche, a public health financing expert said.

Nigeria is still expecting an additional 12 million doses of AstraZeneca vaccines through the COVAX facility, which promised to deliver an overall 16 million doses to the country.

Also, Nigeria’s health minister, Osagie Ehanire had at a Presidential Task Force (PTF) on COVID-19 briefing said 42 million doses of the AstraZeneca vaccines will be delivered to the country through the African Vaccine Acquisition Task Team (AVATT).

AVATT was set up by the African Union to acquire additional vaccine doses so that Africa can attain a target immunization of 60 per cent.

Also, the “federal government has signed off to receive up to 29.8 million doses of the Johnson & Johnson COVID-19 vaccines through the African Union platform,” Mr Shuaib said last week.

He said Nigeria is also expecting more vaccines through the COVAX facility by the end of May or early June.

He said by then, the country would have completed the process of administering the second dose of the current Oxford-AstraZeneca COVID-19 vaccines to vaccinated people.

While Nigerian authorities are confident of the millions of doses it is expecting from the various arrangements it keyed into, there are no guarantees as the country is getting them for free.

Mr Effiong said meeting the target at the current pace is unlikely largely because Nigeria’s vaccination strategy is hinged on securing as many supplies of vaccines doses from other countries as possible.

“But you are finding out that in the main production centres for vaccines, those countries are ramping up their national vaccination programme. For instance, India the host country of the Serum institute which produces vaccines for the COVAX facility will prioritise its own domestic vaccination programme,” Mr Effiong said.

“African Union has said it will not consider AstraZeneca as one of the vaccines that it will be procuring and it’s looking at securing vaccine doses from Johnson & Johnson and that will take time. Not just in terms of getting the deal done, but waiting until the implementation period.

“The earliest timeframe given for that is till the end of this year. So, when you combine all that, there are lots of things that are outside the control of Nigeria health regulators, which will ultimately contribute towards the continued slow rollout of Nigeria’s vaccination programme,” he explained.