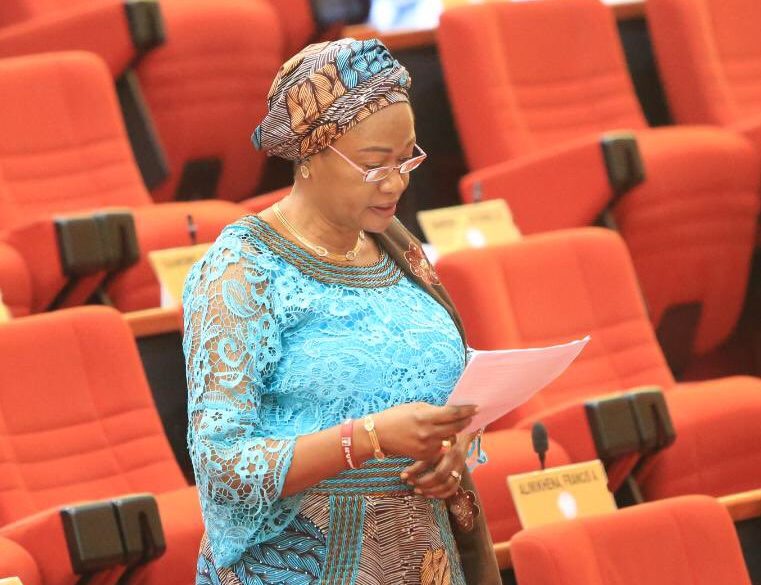 "Are you in PDP? Are you a wolf in sheep's clothing?," Mrs Tinubu said rebuking the lawmaker.

The Senate dedicated Tuesday’s plenary to discuss the rising insecurity in different parts of the country.

Many senators, over 15 of them, contributed to the motion on the activities of Boko Haram terrorists in three local governments of Niger State.

Kogi senator, Smart Adeyemi, was one of the contributors. A seemingly emotional Mr Adeyemi, who spoke for over five minutes, described the current state of insecurity in Nigeria as the worst so far.

But his colleague, Oluremi Tinubu, who belongs to the same political party, All Progressives Congress (APC) as Mr Adeyemi, seemed disgusted by his comments.

Mrs Tinubu who was sitting next to Mr Adeyemi during his contribution was heard chiding the latter.

“This is the worst instability we are facing. In fact, this is worse than the civil war,” Mr Adeyemi said.

“Are you in PDP? Are you a wolf in sheep’s clothing?,” Mrs Tinubu said rebuking the lawmaker.

Ignoring his colleague, Mr Adeyemi said there are a lot of misgivings, a lot of misinterpretation of what is happening.

“Some people believe that some people in government are supporting this move. We cannot pretend that we are capable of handling the situation in our hands. America, as powerful as they are, when the pandemic came, it came to a point China came to their rescue.

“We shouldn’t pretend that we need foreign support now. Billions of naira has been voted for security services and nothing is coming out of it.

“I’m a party man and I’m supporting APC but it has gotten to a point that as supporters we cannot keep quiet,” he said.

It is not exactly clear why Mrs Tinubu verbally ‘attacked’ Mr Adeyemi or why she made reference to the idiomatic expression, “wolf in sheep’s clothing” as he was not the only APC senator who spoke in that manner during Tuesday’s debate.

But Mr Adeyemi, unlike Mrs Tinubu, was a member of the PDP before he joined the APC.

“We cannot continue to allow Boko Haram to mount flags in Nigerian territories. What is our army doing? What are all security agencies doing? It has become so shameful that a great country like Nigeria will be in this type of terrible situation.

“It seems the federal government is handling this insecurity situation with kid gloves. People are dying every day and nothing is being done. No serious, concrete situation on ground to confront these people,” he said.

A few other APC senators who spoke on the issue said the government was being lackadaisical towards tackling insecurity in Nigeria.

Danjuma La’ah who represents Kaduna South (one of the states worst hit by insecurity) was very critical in his contribution; blaming the Buhari administration for not doing enough.

Mr La’ah, a member of the PDP, even inferred that the Senate President, Ahmad Lawan, can take over control of the country as the number three citizen and people will support him.

“The Senate President, you’re number three in this country. If other people cannot fight for…go and take over, we’ll support you.

“If you call for impeachment now, they’ll be looking for who made the call. Whether it is good or not, they don’t want to know. But they don’t know we are saying the minds of our people.

The debate which lasted for over an hour had lawmakers complain about the insecurity in Nigeria as well as possible solutions.

Top among the resolutions was for the Senate leadership to meet with the president and brief him about the situation.