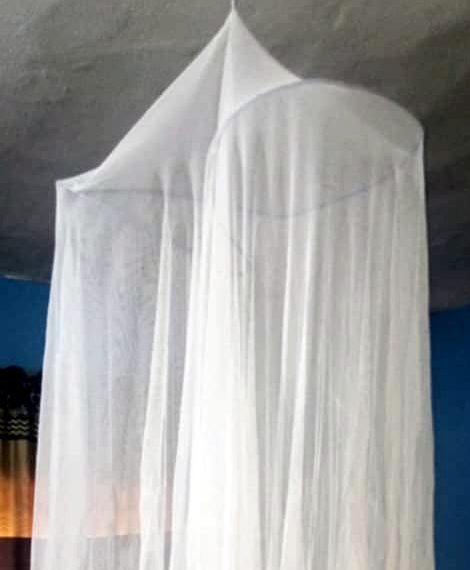 Nets not to be sold bought in Ebonyi state at N2500.

With about 81,640 deaths annually from malaria, Nigeria accounts for over 20 per cent of the 400,000 annual deaths, globally, from the disease.

About eight years after a PREMIUM TIMES investigation uncovered how public officials collude with traders to sell free donor-funded mosquito nets to Nigerians, the practice is still rampant as Nigeria continues its battle against malaria.

With about 81,640 deaths annually from malaria, Nigeria accounts for over 20 per cent of the 400,000 annual deaths, globally, from the disease.

While there is now huge potential for a malaria vaccine, Long-Lasting Insecticide Nets (LLIN) have long been identified as one of the best ways to prevent the disease.

For years, the National Malaria Elimination Programme (NMEP) in Nigeria has been coordinating the distribution of free LLIN across several states. The initiative is funded through donors such as the Global Fund.

But while these nets are meant to be free, boldly written not to be sold, they are still being sold by vendors who procure them from corrupt programme managers, an investigation by PREMIUM TIMES has found.

Mohammed Isah is one of many vendors selling nets marked not to be sold in Ebonyi, Southeast Nigeria.

Mr Isah and his colleagues hawk the bed nets along Udensi Roundabout in front of old government house and around the police headquarters in Abakiliki, the state capital.

Approached by our reporter who disguised as a potential buyer on a recent Tuesday afternoon, Mr Isah said he sells each net for N2,500. The reporter bought the net for the price after the trader refused to bring down the price.

Conspicuously written in capital letters, “DISTRIBUTED BY NMEP, NIGERIA NOT TO BE SOLD”.

The trader gladly accepted to reduce his price to N2,000 when the reporter made an offer to buy the nets in large quantity in a bid to engage him further.

“Any quantity you want, I can supply it to you at any time and anywhere,” Mr Isah boasted in pidgin English.

The trader who resides in Ogbe Hausa in Abakiliki revealed that he gets his supplies from Kaduna State. He however refused to mention his supplier when pressed further.

Like in Abakaliki, such sale of mosquito nets that should be free are common in many Nigerian cities.

However, Emmanuel Shekerau, a senior official of the NMEP said the agency is not aware of any sale of free nets being distributed through the programme.

“However, what I can say is for any individuals or organisations or cartel that is involved in such to desist from such acts as it will just set us back in the fight against malaria,” he said.

“We continue to call on people that when these nets are provided they should sleep under them to prevent malaria.”

Without adequate control and monitoring by the authorities, vendors like Mr Isah have joined the trade in LLIN, buying the free products from government officials and their agents and selling them to millions of unsuspecting Nigerians.

When the government occasionally clamps down on the network, like the jailing of two health workers in 2013, some sellers resorted to importation and purchase of fake mosquito nets which they pass off as treated and approved.

The fake nets are easily accessed by Nigerians through the sellers, who pass them off as the real ones.

The difference between the genuine and the fake nets can hardly be detected on the package as the counterfeiters produce nets with NAFDAC registration numbers obtained from the original mosquito nets, the PREMIUM TIMES investigation revealed.

There are two types in this category of counterfeited products: those bearing the FG’s imprimatur with the embargo “not to be sold” and those without it, but having original NAFDAC registration numbers.

“Sometimes people confuse nets from commercial as if they are from the free component and therefore being illegally sold. It may not be so. However, the reports of free nets being sold made the implementers to introduce certain interventions,” Omokhudu Idogho, the managing director of the Society for Family Health (SFH) said.

“It is being checked and addressed effectively. Whenever it is discovered, the implementers work with police to drill down and name and shame those involved.”

He, however, admitted that the protracted pilfering of bed-nets is adversely derailing the progress of malaria grant implementation.

Mosquito nets prevent mosquito, the vector that carries the malaria parasite, from reaching or biting humans who use the nets. It is, thus, a major way of preventing the disease.

Decades of investment in solutions to prevent and treat malaria yielded innovations such as the LLIN that have become one of the most powerful tool deployed in the fight against malaria.

More than 500 million nets have been delivered to sub-Saharan Africa in the past decade and as nets have been more widely used, incidences of malaria have fallen. Between 2000 and 2012, global malaria mortality dropped by 42 per cent and a conservative estimate is that mosquito nets have helped to save at least 3 million children’s lives.

But despite hundreds of millions of such nets deployed in Nigeria which carries a disproportionate amount of the global burden of malaria, progress has remained slow.

Malaria remains endemic in Nigeria with about 53 million cases annually and nine deaths per hour.

Apart from the pilfering of free nets, investments by donors such as the Global Fund are not translating to equivalent and much-expected results due to sharp practices in the management of funds.

That was why the Global Fund set up the Office of the Inspector General (OIG) to safeguard the fund’s assets, investments, reputation and sustainability through its audits, investigations and advisory work.

The latest OIG report attributed the new challenge of mosquitoes becoming resistant to the insecticides used in making bed nets partly to manufacturers reducing the quality of chemicals used in making them.

The report published in March indicted TANA Netting FZ-LLC (TANA), a firm that supplied LLIN to Nigeria and many other developing countries between 2017 and 2018, of using an invalidated chemical formula to produce the mosquito bed nets.

The nets had reduced life spans and were outside of the required product specification due to being underdosed with insecticide.

Earlier in 2014, the Global Fund OIG audit report had accused the NMEP of fraudulent practices and other procurement irregularities between 2008 and 2010.

NMEP is the Nigerian agency responsible for formulating and facilitating policies and guidelines, as well as coordinating the activities of partners and stakeholders on malaria control. It is one of the principal recipients of grants for malaria intervention in Nigeria.

Mr Shekarau, the programme’s spokesperson, said the issues have been rectified and the national programme has “really put in the very good risk management and mitigating measures in order not to have such issues going forward and you will realize that since that time there hasn’t been any such report implicating the national programme as it pertains to this.”

The OIG also, in 2014, indicted SFH, another principal recipient. SFH is an NGO championing malaria intervention and other health-related programmes in the country.

The OIG accused SFH of fraudulent practices and other procurement irregularities in the management and procurement of bed nets (LLIN) between 2008 and 2010.

The OIG accused SFH of not complying with the terms and conditions of the grant agreement by not accounting for and using the profits earned from the mark-up of bed nets, solely for the purpose of the grant programme.

“SFH fully cooperated with the investigation and in November 2013, SFH repaid US$ 300,982 to the Global Fund relating to the bed nets mark-up.”

Responding to the OIG indictment, Omokhudu Idogho, the managing director of SFH, said there was no illegality in the organisation’s handling of the grant.

“Let’s clear this up. SFH was to implement free net distribution but at the same time through the commercial sector was also distributing cost-recovery nets. The planned arrival of the nets was delayed and SFH obtained permission and procured the free nets from the commercial end through a very transparent process.

“There was no illegality in it. Global Fund eventually insisted that the usual mark-up on the cost-recovery nets (which SFH uses to maintain its logistics and distribution mechanisms) be removed.

“This was refunded, again through a transparent process. SFH accountability of donor funds have never been in doubt and through all transparent and accountable process SFH runs its donor sponsored projects. SFH remains the sub-recipient for the Global Fund project and is doing extremely well in maintaining accountability”, the official explained in an interview with PREMIUM TIMES Saturday afternoon.

The failure of the Millennium Development Goal 6 for 2015 – to combat HIV/AIDS, malaria, and other diseases – brought about the latest 2030 target.

The target is to reduce malaria cases and deaths by 90 per cent and to end it in countries such as Nigeria where malaria has remained endemic.

Apart from the sharp practices in the use of donor aids for several interventions, there are several other factors pushing Nigeria further off-track from reaching the target.

As Nigeria joins the rest of the global community to mark the World Malaria Day celebrated every April 25, health experts urge countries with high burden of malaria to make more domestic funding available.

The theme for this year’s celebration is “Zero Malaria – Draw the Line Against Malaria” because every malaria case is preventable, and every malaria death is unacceptable, the World Health Organisation (WHO) said.

Nigeria’s domestic funding for malaria has been poor leading to donor funding dependency.

As donor money starts to shift away, and the clock runs out to establish a locally backed replacement, health advocates say the government should source for more local funding for malaria.

Nigerian health minister, Osagie Ehanire, said about N1.89 trillion will be needed if Nigeria is to achieve malaria prevalence rate of less than 10 per cent and reduce mortality rate to less than 50 deaths per 1,000 live births by 2025.

Mr Ehanire in a statement ahead of the World Malaria Day said the country has developed a five-year malaria strategic plan to sustain gains already made and chart a pathway toward achieving a malaria-free Nigeria.

However, considering the prevailing economic circumstance, the government may not have the required amount, Mr Ehanire said.

If funding stops from the donor agencies, it will affect our reaching any malaria target, the NMEP focal person, Mr Shekarau, said.

However, the sale of mosquito nets meant to be free for Nigerians, as well as various indictments by the Global Fund OIG, shows that beyond funding, Nigeria must strengthen its monitoring and accountability process if the country is to eradicate malaria.

Article of Faith: Abounding In the Abundant Life, By Femi Aribisala