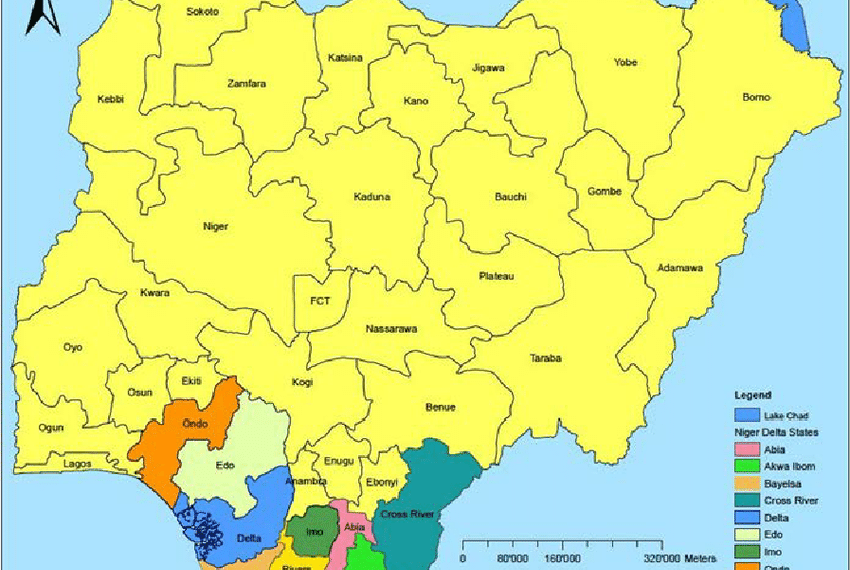 ANALYSIS: How state governments cheat oil-producing communities in use of 13% derivation fund

Since Nigeria’s Fourth Republic began in 1999, the eight oil and gas producing states have received over N9 trillion under the derivation principle sanctioned by the nation’s constitution. The constitution stipulates payment of 13 per cent of oil revenue from the Federation Account to the states as a derivation fund.

In the last three years (2018-2020), in total, the oil-producing states have received N1.5 trillion from the Federation Account under the derivation principle, A PREMIUM TIMES analysis of data from the National Bureau of Statistics (NBS) has revealed.

The analysis, however, reveals that intervention activities and physical developments in the oil-producing communities do not reflect the derivation fund received by their states.

The derivation fund is paid to the states monthly to assist their oil-producing communities in tackling environmental pollution and degradation, provision of basic amenities like healthcare, potable water and paved roads, and economic empowerment of the community people.

Section 162, Sub-section 2 of the Nigerian Constitution stipulates that the fund is for the exclusive use of oil/gas producing communities as compensation for loss of fishing rights and productive farmlands as a result of oil and gas exploration and production activities.

The Nigerian Extractive Industries Transparency Initiative (NEITI) also defines the fund as a financial incentive enshrined in the Constitution for oil-producing communities, based on their production input, to serve as benefits and encourage the community to create an enabling environment for more production of crude oil and gas.

Eight states with a combined population of about 47 million receive the 13 per cent derivation fund, based on their contributions to national oil and gas production. The states are Abia, Akwa Ibom, Bayelsa, Delta, Edo, Ondo, Imo and Rivers.

One of the reasons is that the state governments commit only small parts of the fund to the intended interventions in the oil-producing communities.

For this analysis, this reporter was able to access the budgets of four oil-producing states: Ondo, Edo, Imo and Abia

The Ondo State Oil Producing Areas Development Commission (OSOPADEC) was established by the Laws of Ondo State CAP. 106 in 2001.

In 2018, the state government budgeted N6.2 billion (N6,214,636,800) for the agency for its intervention activities. However, data obtained from the NBS shows that the state received N16.5 billion (N16,537,861,606.40) under the derivation principle for that year. This means OSOPADEC got only 40 per cent of the derivation fund for its activities.

It is a similar case in Imo where the state government in 2019 budgeted N5 billion for the activities of the state’s Oil Producing Area Development Commission (ISOPADEC). But the state received N10 billion that year as a derivation fund.

The same trend is noticed in the other states, including Edo State where its own agency usually gets only 40 per cent of its derivation fund. The commission got N1.87 billion in 2018, N7.5 billion in 2019 and N6.6 billion in 2020, totalling N16 billion. However, NBS data revealed that the state got N51 billion derivation fund in the three years.

Also, the Abia State government budgeted N2.04 billion for its oil-producing development commission in 2019. In that same year, the state got N6.8 billion derivation fund.

As a result of the underfunding of the development commissions, mismanagement of funds and fraud, many oil-producing communities continue to suffer from the negative impact of oil exploration and production.

A case in point is Ayetoro, a coastal community of Ondo State. A rise in the sea level due to oil exploration and global warming has led to floods that have washed away homes, the cemetery and a worship centre in the town.

Sixteen years ago, the NDDC started a multi-billion-naira shore protection project in the community. Although billions of naira have been paid to the contractors, nothing is on the ground to protect the community against ocean surge.

Most of the oil-producing areas development commissions are not transparent with their finances and appointments into them are treated as political compensation.

The agency in Delta State, DESOPADEC, for example, does not have on its website the names and status of its projects in the oil-producing communities. The agency has been accused of breaching the statutory process in the disbursement of its funds, with a large part of the funds committed to recurrent expenditure, including payment for office spaces rented mostly outside the oil-producing areas.

Irked by rampant reports of mismanagement by the state agencies, a former Senior Special Assistant (SSA) to the President on National Assembly Matters, Ita Enang, suggested the derivation fund be allocated directly to the communities and not the state governments.

“There should be an amendment to the Niger Delta Development Commission Act to ensure that the 13 per cent oil derivation fund is paid directly to host communities instead of state governors, as majority of the communities have been accusing the governors of diverting the money, thereby denying their people the basic necessities of life,” Mr Enang said.

Joseph Nwakwue, an oil and gas professional with Zera Advisory and Consulting, spoke in the same vein when he decried the misappropriation of the derivation fund by state governments.

Mr Nwakwue blamed the situation on a lacuna in the constitution concerning the use of the fund.

“The constitution did not state how the fund should be deployed and what it should be used for – meaning it gives the states government power over the 13 per cent derivation fund, making the host community underdeveloped despite the monthly allocations,” he said.

But Ken Henshaw, the Executive Director of We the People, a non-governmental organisation in the Niger Delta region, said the lacuna exists elsewhere because the constitution is clear on what the fund should be used for.

“The constitutional provision for 13 per cent derivation states that the fund should be used for the development of the oil-producing communities. The constitutional lacuna is that it makes the money pass through the state. What has happened to this 13 per cent derivation is what has happened to the local government fund paid to the joint account of state and local governments.

“The derivation has not lifted any of these people from poverty; that is why we get depressed when we hear state governments asking for an increased revenue derivation formula. It is good to say derivation has failed in Niger Delta.”

The Ondo state Commissioner for Information, Donald Ojogo, did not return calls and text messages sent to his phone for his comment for this report.

DESOPADEC has no phone number on its website and did not reply to emails sent by the reporter.