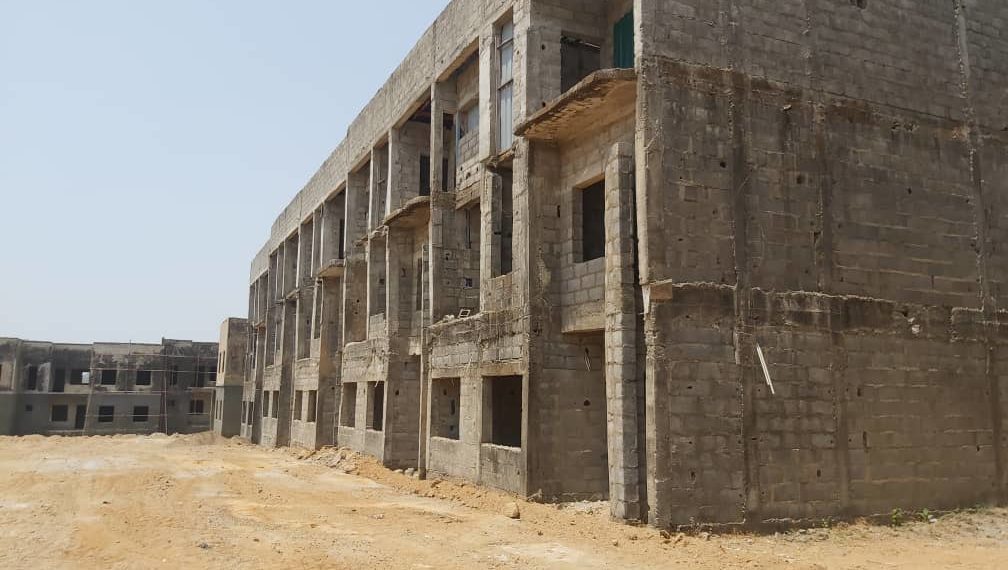 Subscribers to home ownership plans in Abuja say the failure of government to regulate the sector has put people seeking to own homes at the mercy of unscrupulous estate developers.

Yusuph Olaniyonu relocated to Abuja in 2015 after his appointment as Special Adviser on Media and Publicity to the then Senate President, Bukola Saraki.

On arrival, he realised that the cost of renting an apartment in a location that gives him easy access to his office was far too high for him. After considering his options, he opted to buy a home from Hortigraph Nigeria Limited, an estate developing firm in Abuja.

Mr Olaniyonu said he quickly sold off a property located at Isheri in Lagos to raise money. Between June 15, 2016 and January 12, 2017, he paid N27,390,000 for a three-bedroom terrace duplex with BQ apartment at Hortigraph Housing Estate in Karmo District of Abuja.

He made the payment into the bank account of the developers with Aso Savings and Loans Plc in four tranches, according to documents seen by this newspaper. 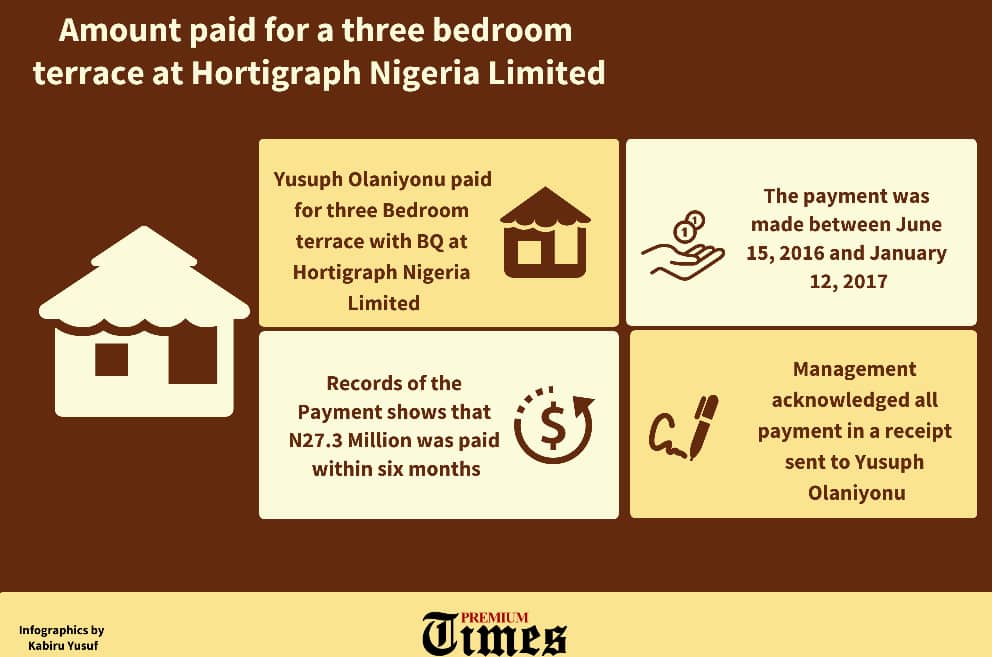 The document showed that the project is jointly developed by Hortigraph Nigeria Ltd and Hallmark Synergy Integrated Services Ltd., with Aso Savings and Loans Plc. as the project financiers.

Mr Olaniyonu said he was told he would get the keys to his home within six months of completing the payment. However, almost five years after the payment, that has not happened.

“I feel disappointed and helpless, battling with vague promises here and there, while I keep paying N1.1 million as house rent annually for a small space that cannot contain my family,” he said.

According to a report by PriceWaterhouseCooper (PwC), Nigeria’s real estate sector has struggled for decades, contributing less than an average of seven per cent to the GDP and under one per cent to employment.

It said the sector is the largest in countries like the US and Australia in terms of contributions to GDP and that also provides the largest employment in Australia.

Act 3 of 1992 which established the National Housing Fund (NHF) was to mobilise funds that will facilitate the provision of affordable housing for Nigerians.

Under the extant NHF law, every Nigerian earning N3,000 or more per annum is required to contribute 2.5 per cent of their monthly basic salary to the NHF. The funds mobilised will be made available to contributors at affordable interest rates to build homes.

But the housing problem in Nigeria seems to be getting worse.

The Pwc report quoted the Nigerian Bureau of Statistics that Nigeria has a deficit of 17 million houses as of August 2012 and requires 700,000 houses annually, compared to less than 100,000 currently being constructed.

Ironically, it said the cost of building a house in Nigeria is relatively higher while the average income level is relatively lower compared to global average.

“This means even when there is a supply of housing units, the price tag whether self-built or off the shelf purchase is out of the reach of the majority of Nigerian workers thereby making affordable housing still a dream,” the report said.

Mr Olaniyonu said his experience was the result of the housing sector not being regulated.

“This is a sector that is unregulated, a sector that involves so much money. People are putting in their life savings and the government doesn’t want to regulate it,” he said to PREMIUM TIMES.

He said developers are behaving as they like and duping people without fear of sanction. He said most of the billboards and banners in strategic positions on Abuja major roads announcing one housing project or the other, are deceptive.

“They are just using it to dupe people,” he said, urging the National Assembly to look into happenings in the sector. 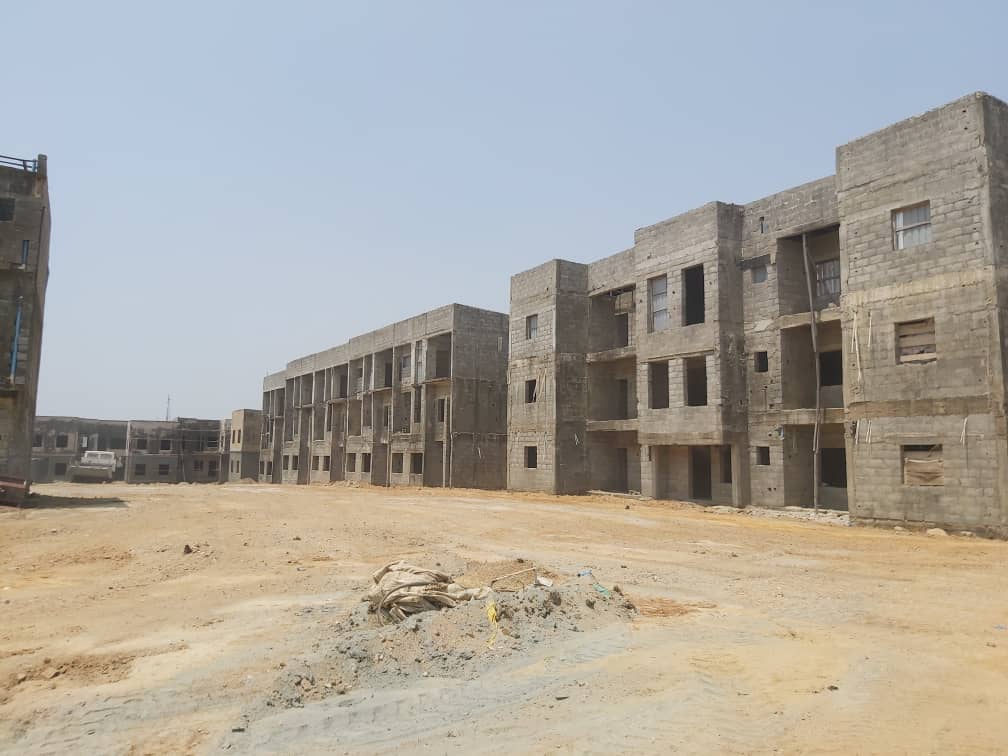 When contacted, Hortigraph’s secretary, Nuruddeen Abubakar, said they stopped work on the estate over problems they had with the financiers of the project, Aso Savings.

Mr Abubakar said subscribers who paid for buildings in their estate around 2016 did so because they were impressed by what they saw in phases one and two of the estate. “They saw what was on ground and keyed into it,” he said.

He said the company started phases three and four of the estate in 2017, after much work had been done on the earlier phases. “We are almost done. In fact, some parts have been roofed.”

He said their problem with Aso Savings began when they started noticing irregular deductions from their account with the financiers.

“We started seeing charges here and there, restructuring and a certain amount of money was taken out of our account,” he said.

Mr Abubakar said they got no reasonable explanation for the deductions. “So we contacted some subscribers that we could reach out to, and instructed them to stop paying into our account with Aso Savings because of these irregularities,” Mr Abubakar said.

He said they took Aso Savings to court, but decided to settle the matter out of court last month. Mr Abubakar said the company has moved back to site and expect to complete the buildings over the next 12 months.

In its reactions, however, Aso Savings blamed the developers for a myriad of issues, including low quality project, non-adherence to the project manager’s recommendation and developer’s outstanding obligations to the financiers.

The corporate affairs manager of Aso Savings, Tope Onamada, said some of the subscribers in the completed phase one had complained to the bank about the quality of work on the units that were handed over to them.

Ms Onamada acknowledged that Hortigraph also accused it of illegal charges on its account and reported it to the CBN in 2019 over the charges.

“A meeting was scheduled between the developer and the bank at the CBN. Afterwards, CBN suggested that both parties should meet and sort out their differences upon ASO’s presentation of its position,” she said.

Ms Onamade said Hortigraph later filed a suit against Aso Savings on the same matter, while the two parties were still seeking a solution, only for the developer to withdraw the suit without notice.

“The developer also filed the case at Arbitration which had several sittings. Whilst at Arbitration, Hortigraph withdrew from the sitting without giving any reason to ASO for withdrawal,” she said

She said the managing directors of both parties held a series of virtual meetings but they could not agree because Aso Savings considered the position of the developer not acceptable, as it was at variance with the proposals they put forward for the project.

PREMIUM TIMES found that the developers and the bank have not resolved their differences and cannot say when the buildings would be delivered to subscribers.

Hortigraph is not the only developer unable to meet its customers’ expectations.

In 2017, Hall 7 Real Estate Limited, a real estate development firm in Abuja, presented plans to develop land at Aso Gardens Estate through its project tagged “Step One.” Abdulrazaq Umar, a civil servant, was among those who embraced the plans.

He was told to pay 30 per cent of the cost, while the developer would take a loan from the Federal Mortgage Bank (FMB) through the Federal Housing Authority (FHA) to cover the remaining 70 per cent.

Mr Umar said after he made the initial deposit, they put up a repayment plan for the FMB loan and that he should pay his 30 per cent equity contribution within a year.

He said he raised N1.9 million to pay the contribution within the stipulated period. But later, he received a letter from the developers advising him to change from FHA Homes to AG Homes Mortgage Bank, because they thought that the loan from FHA would not arrive on time.

In 2018, they made him sign a letter to the FMB requesting to change his primary mortgage bank to AG Homes.

In April 2019, Mr Umar said FMB granted his loan request of N11 million. But AG Homes did not notify him that the money had arrived until August 2019 when they needed a letter from him to grant them approval to release the money to the developers, Step One.

He said the developers encouraged him to sign the release letter, telling him he would get his house within six months of the release of the money to them.

“I signed the letter, and the money was moved to Step One. That means 100 per cent of the investment amount has been paid since August 2019,” he told PREMIUM TIMES on phone.

However, he said the agreement they had in 2017 was that his house would be delivered 45 days after confirming payments from the mortgage bank.

“Since the money got to them, 45 days have elapsed, they have not even commenced clearing of the site or mounting the blocks,” he said.

When he approached the developers for explanation, Mr Umar said he was told they would go back to work or they would reallocate a four-bedroom terrace apartment to him if he could add more money to what he had paid. He said he agreed to the offer, but was later told that it was no longer feasible.

“Later they reached out to say that it was not possible anymore, and that I just need to wait for them to complete the initial 3-bedrooms for me,” he said.

Another subscriber who does not want his name mentioned had a different headache. Although Step One delivered his home after much back and forth, he said the building was substandard.

He recalled the developers chasing him to key into their plans at the beginning of the project, but that after he completed the payment, he became the one running after them.

PREMIUM TIMES reported how some major estate development companies left subscribers stranded for many years after collecting millions from them.

Many subscribers who shared their experiences with this reporter wondered why a trillion naira sector is left unregulated and buyers are at the mercy of estate developers.

Some we spoke to did not want their names mentioned because they said the developers had threatened to refund their money if they report them to anyone after waiting for over three years without a house.