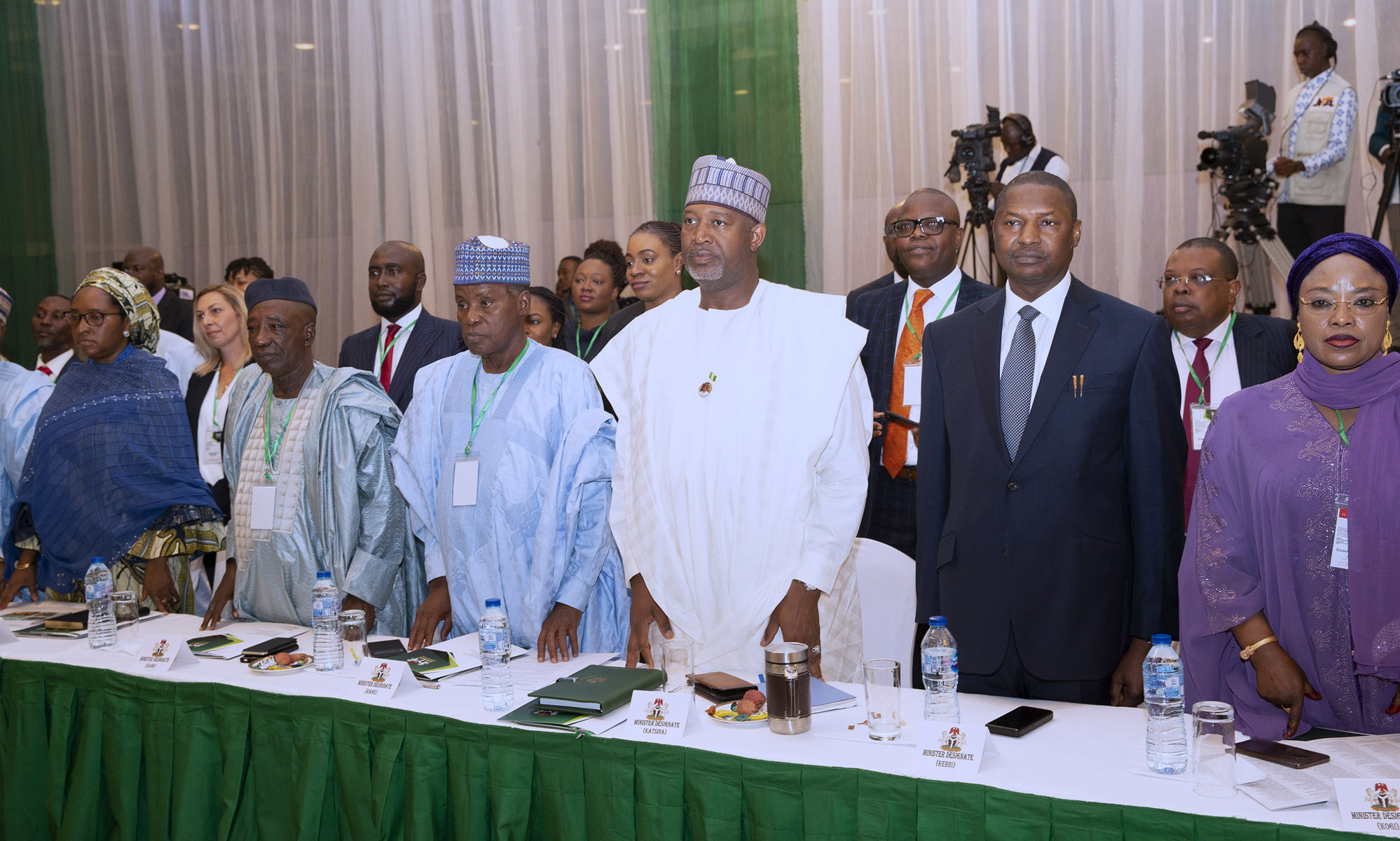 ANALYSIS: About half of Nigeria’s current ministers studied these courses

Fourteen of Nigeria's serving ministers have degrees in the same course.

The majority of Nigeria’s current ministers have at least a university degree with some having multiple degrees while at least four have PhDs.

Law degree is their most desired honour as 14 of the nation’s current 44 ministers, whose ages have been spotlighted to be at odds with national reality, are law graduates at various levels.

This is followed by honours in engineering, public and business administration, data culled from the review of their curriculum vitae show.

Ministers of FCT, Muhammad Bello; Clement Agba (as master’s honour); Mr Nanono (as first degree in 1972); humanitarian affairs, Sadiya Farouq; mines and steel (state), Ikechukwu Ogah all had a stint in business administration in the course of their educational itinerary.

Accounting, medicine, international studies, economics, English and sociology are the next most studied course among the ministers with Adamu Adamu, education; Zainab Ahmed, finance; and Tayo Alasoadura, Niger Delta (state) all having degrees in accounting.

While the trio of Osagie Ehanire, health; Adeleke Mamora, health (state); and Mr Ngige (as first degree) studied medicine, the trio of Goddy Agba and Mr Dare (both at first degree levels) and Ms Farouq (at master’s level) are graduates of international studies. 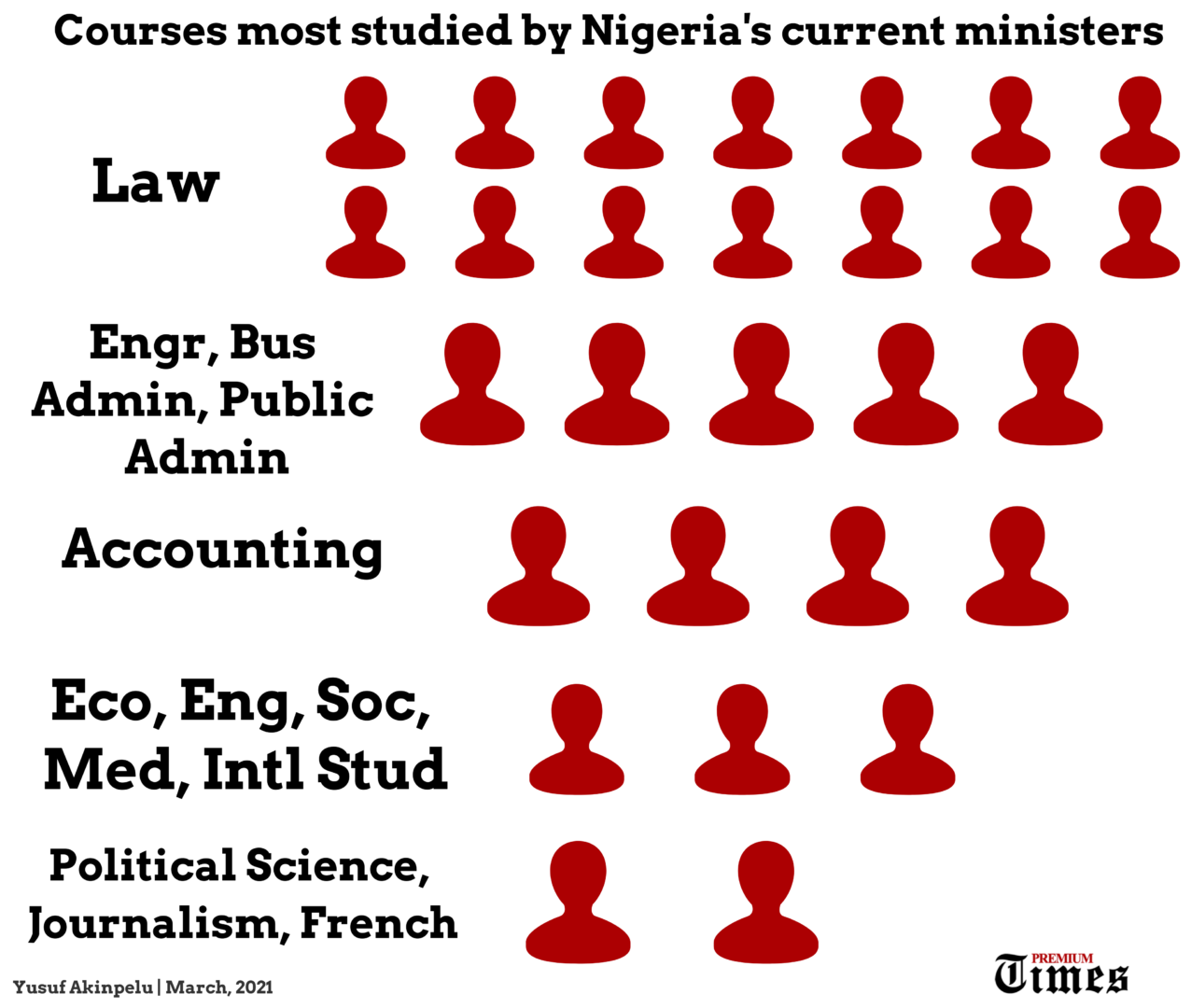 The duo of Maigari Dingyadi, minister of police affairs and Mr Onyeama studied political science (both at bachelor’s and master’s degrees).

Also, both Mr Adamu and Mr Dare have degrees in journalism. Lai Mohammed (as one of the two bachelor’s degrees he has) and Mr Dada are graduates of French.

All the ministers but three have at least one university degree, with Ahmadu Bello University being the institution where the most degrees were obtained, the review of their credentials show.

Petroleum minister Muhammadu Buhari graduated from Mons Officer Cadet School, Aldershot, UK, in 1963 having completed his programme at the Nigerian Military Training College (NMTC) in 1962, which was later renamed the Nigerian Defence Academy (NDA) in February 1964.

As a colonel, Mr Buhari later attended the U.S. Army War College in Carlisle, Pennsylvania, where he bagged a master’s degree in strategic studies in 1980.

His colleague at the ministry of interior, Rauf Aregbesola, also gained a higher diploma in mechanical engineering in 1980 from The Polytechnic, Ibadan.

Aviation minister Hadi Sirika also has various aviation qualifications to his name, including those he got from the Nigeria Civil Aviation Training Centre, Zaria, Delta Aeronautics Inc, Petroleum Helicopters Training Institute, Flight Safety International and City University London where he had his masters.

Twenty four of the ministers have both bachelor’s degrees and master’s degrees.

FCT minister for state, Ramatu Tijjani, has a PhD degree in view from 2015.

State minister for mines and steel, Ikechukwu Ogah, has a higher diploma in accounting from the Institute of Management and Technology (IMT), Enugu. He went on to bag two bachelor’s degrees to his name, his CV shows – first in banking and finance and then in business administration.

Like him, humanitarian affairs minister, Sadiya Farouq, has two master’s degrees. One in business administration which she got in 2011, and the other in international affairs and diplomacy.