Nigeria’s food inflation is highest in 15 years and insecurity, COVID-19, climate change and economic policies have pushed food prices beyond the reach of millions.

The prices of poultry products in Nigeria are at their highest levels ever as the country faces its worst food inflation in at least 15 years, traders, consumers and producers in the sector have told PREMIUM TIMES.

Food inflation reached 27 per cent in February 2021, according to the National Bureau of Statistics, making it the highest since at least 2005. The rise has seen the prices of all classes of food skyrocket almost on a daily basis, leaving Nigeria’s large population of poor citizens struggle to get food and key ingredients.

A PREMIUM TIMES examination shows how several factors have contributed to the rise in poultry prices, and how the government’s efforts have yielded little or no impact in solving the problem.

In several interviews, poultry farmers, livestock feed processors and marketers said the rise in the prices of key ingredients for poultry feeds is the major reason for the hike in prices of poultry products in the country.

The two most important ingredients are maize and soybeans. The supply of these two crops has fallen steeply in recent months, they said, and a key reason has been insecurity that has put farmers off work last year, Covid-19 disruption, weather changes, and challenges with importation.

“It has never been this bad,” said a poultry farmer in Ekiti State, Uthman Awwal. “This increase is directly from the farmers who plant maize, we are unable to get maize and soybean this period, so those that have maize are selling to the feed millers at higher prices.

These high costs have translated along the chain to the final poultry products.

At Ogbete Market in Enugu State, buyers said as of October 2020 a crate of eggs sold for N950, but later increased to N1, 200 per crate in November.

Ajewole Zaccheaus, a poultry farmer in Ayetoro Ekiti, Ekiti State, who spoke with this newspaper, also attributed the rising prices to the high cost of feeding.

Mr Zacchaeus said when he started poultry farming over two years ago, he used to buy a bag of feed at N3,000, but that as of today, the price of feed goes over N5,000.

“The current challenge in the sector now is feed, the cost of feeding is too high in Nigeria and even the challenges have reduced the profit maximisation in the poultry sector,” he said.

The feeds are expensive because their ingredients are costly and scarce.

The president of Poultry Farmers Association of Nigeria, Kaduna State chapter, Timothy Okunade, told PREMIUM TIMES farmers now buy a tonne of maize at N195,000 against N90,000 it sold for a year ago. Soybeans goes for N310,000 a tonne as against N130,000 last year. 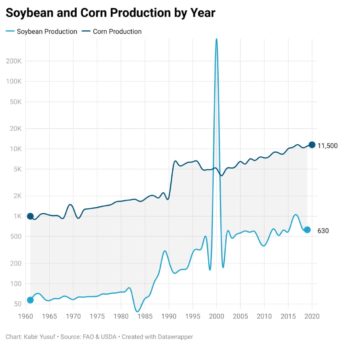 Between 1999 and 2020, Nigeria produced more maize than it did at independence, data from the United States Department for Agriculture (USDA) says. 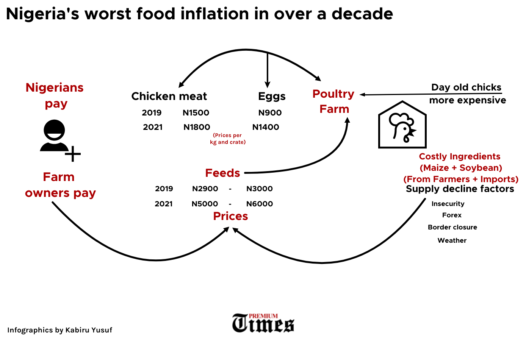 The produced quantities of maize and soybeans have clearly not complemented domestic demand. And things became worse in the last one year for many reasons, traders and feed manufacturers told PREMIUM TIMES.

Mr Okunade, who heads the poultry farmers association in Kaduna, said a key factor has been insecurity that made many farmers abandon their farms for fear of being kidnapped or killed.

In Kaduna alone, about 937 people were killed and 1,972 kidnapped in 2020, according to Kaduna State security report presented early March.

Mr Okunade lamented that government policies also contributed to the problem as the country still exported some of these commodities even when domestic needs had not been met. He also blamed climate change.

“Flooding washed away some large areas of farmlands especially up north, while down south, early stoppage of rain led to failed or poor harvest,” he said.

Mr Okunade noted that supporting main users to import these commodities might help cushion the effect of scarcity.

“Maize, soybeans and groundnut are very expensive and it is the by-product derived from these crops that’s used for poultry feed formulation,” he said.

“We have different types of feed for poultry birds, and they’re all expensive. The prices of these feeds have risen by 70 per cent. The feed we were selling N1000 before is now sold for N1,700.” 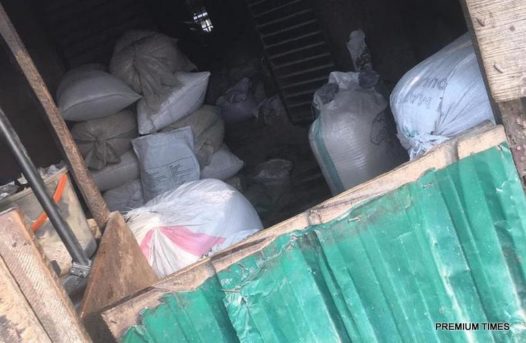 He lamented that they used to buy a kilogramme of maize at between N80 and N82 before, but now, the same quantity goes for between N195 and N200.

“You can see that the price has tripled, that’s an increase of about 130 per cent,” he added. 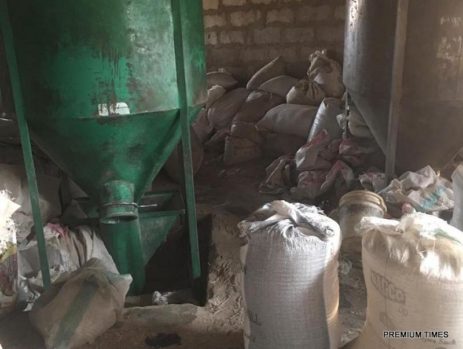 “The farmer-herder clashes prevented most of their farmers from accessing their farms to plant, coupled with the federal government policies on border closure,” he said.

Mr Edwin said farmers had challenges in production in 2020 there were triggered by the COVID-19 pandemic lockdown policy.

“Farmers could not plant during the wet season, that is during the COVID-19, for the year 2020 production was poor. Other factors like flood, drought and insecurity contributed to the poor production,” he said.

He said he expected the price of maize to fall later in the year following the government’s intervention during the late wet season.

“We are doing the best we can so that in the next three months the issues surrounding the hike in price will reduce and the prices of poultry feed will be back to normal,” he said.

He said farmers are already harvesting what was cultivated in the 2020 dry season. 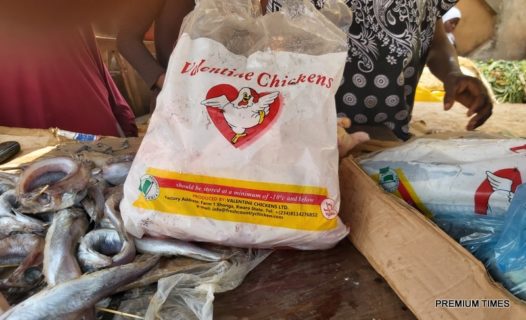 Jimmy John-Mark, a poultry farmer in Kaduna, said the restriction on maize importation also aggravated the scarcity of the commodity.

On July 13, 2020, the Central Bank of Nigeria stopped the issuance of forex for the importation of the cereal. The decision, according to CBN, was to boost local production of maize.

“A lot of farms are closing down because of this, when they cannot keep up with the hike in the prices of feed,” Mr John-mark said.

“This is because feed processors spend much on fuel to power their engines when there is no stable power supply, and on transportation,” he said.

Mr Jeremiah said this has also led to a significant increase in the price of day-old chicks.

In Nasarawa state, Susan Godwin, who grows maize said the price of a 50 kg bag of maize was sold at N8000 before the pandemic started, but went up to N10,000 in June.

“A lot of things have caused the prices of feed to increase. Some farmers planted late when the rains were almost leaving. So it was difficult to harvest enough,” she said.

The increase in prices across the value chain shows that the few initiatives by the Nigerian government have failed to stem the problem and ensure food security.

On July 8, 2019, the Central Bank of Nigeria launched an intervention programme tagged, University-based Poultry Revival Programme, with the hope of reviving the comatose poultry sub-sector in the country.

The bank said the initiative was in tandem with the fulfillment of its resolve to diversify the economy, create jobs and engender inclusive economic growth in the country.

According to the CBN governor, Godwin Emefiele, the initiative would also raise a new crop of entrepreneurs in the agricultural sector in modern poultry production, provide infrastructure that would support the sustainable production of poultry, and reduce pressure for foreign exchange demand through import substitution by local poultry production.

Nearly two years after, the programme has yet to increase the supply of poultry products, and make them more affordable.

Osita Nwanisobi, spokesperson for the CBN, did not respond to PREMIUM TIMES enquiries about the project.

New book, Ghost of the Niger Delta, out on Monday