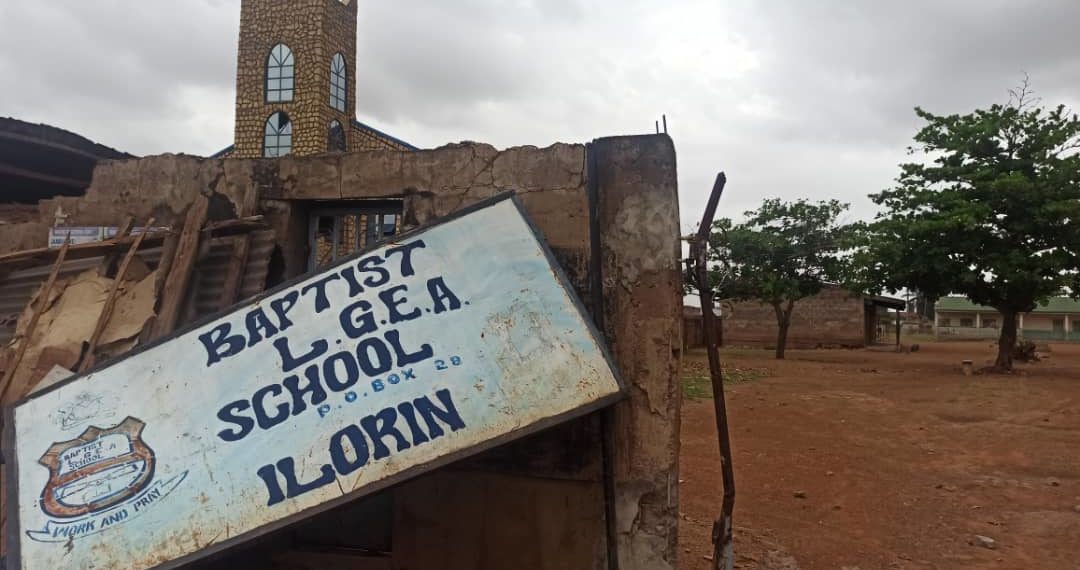 Hijab Controversy: How church members are preventing resumption of schools in Kwara

As the controversy over the use of hijab in some schools rages on in Kwara State, some church members have devised measures to prevent the resumption of the affected schools.

The state government had last month ordered the closure of 10 schools following the resurgence of the crisis over the use of the hijab.

The government set up a committee to look into the controversy and later announced that all public schools should respect the rights of Muslim students to wear the head covering, if they choose to.

The government then directed the 10 schools to reopen but immediately withdrew the directive, citing security concerns after Christian leaders in the state rejected the government’s position on the use of the hijab.

It finally directed the schools to reopen on Wednesday but the crisis continued as rival groups clashed in some of the schools.

A PREMIUM TIMES’ reporter visited three of the affected schools to observe the situation on Thursday.

While some people held worship services at the gate of some schools, the entrances of one of the schools were filled with sand to prevent entry.

When PREMIUM TIMES arrived at Baptist Secondary School in Surulere on Thursday morning, scores of Christian faithful occupied the premises of First Baptist Church, which is close to the school.

Some of the members, who spoke with our correspondent, said the church would not allow the use of the head covering in its school.

“Can I enter a mosque with my slippers? We don’t want and we mean it. There is nothing the government can do than to reverse the order,” a young man who does not want his name in print said.

Speaking to PREMIUM TIMES, the leader of the Baptist Churches in the state, Victor Dada, blamed the state government for the crisis.

“The fact that they have helped us at one time or the other does not make them owner or co-owners of the schools. That is what we are saying,” he said, disputing the government’s ownership of the schools.

Mr Dada advised the state government to await the Supreme Court judgement on the ownership of the schools before taking any action.

At the Cherubim and Seraphim College at Sabo Oke, many members of the church occupied the front of the school between 7 a.m. and 10 a.m.

Also, this newspaper observed that a truckload of sand was heaped at the entrance of the college. A banner with the inscription “Our school is our heritage. We say NO to hijab” also hung from the gate.

Although the church leader was not there when our reporter got there, one of the church members ,who spoke, said the church will continue to block the entrance of the schools indefinitely.

“We were more than this earlier. Some of our members have gone back home but all of us can’t leave. We’ll fight this to the end,” the member told PREMIUM TIMES.

He said the church leader had given a directive that members should assemble again by 7 a.m. on Friday to continue the protest.

Members of the St. Barnabas Cathedral, an Anglican Church, decided to hold a worship service at the entrance of the school.

Women in an Ankara uniform of the Anglican Diocese of Kwara were ministering in songs when our reporter got there.

“This is a period for us to be fervent and secure our schools,” a pastor, who delivered a short sermon after the singing, said.

Afterwards, a woman, who appeared to be the women leader, urged the female members to come back en masse on Friday.

The woman encouraged the women to again wear their Ankara outfits at the next meeting.

An elder in the church, Olalekan Aransiola, advised the youth, who he felt their dressing was not befitting of the service, to dress “gorgeously” in subsequent meetings.

“You cannot just dress anyhow. Put on something nice and even God is happy with it,” the old man said.

Also, he told the young men to keep watch over the facility after the congregation would have dispersed.

Light refreshments were shared amongst the church members at the end of the service.

Speaking to PREMIUM TIMES after the meeting, Mr Aransiola said the church members were only trying to defend their heritage.

“We just want to defend this place with God sending us to this place. It is the blood of Jesus that formed this place and that we want to sustain. We welcome everybody to come and school here but that name of Jesus should not be defamed and cannot be crossed.”

Asked if he feared the crisis might linger longer than expected, Mr Aransiola said: “We don’t envisage it will linger more because it’s just a matter of reasoning. How many schools are in Ilorin that belong to the missions? Just a few.

“This is a Christian school, (they should) abide by the rules,” he added.

The Executive Director of Brain Builders Youth Development Initiative, Abideen Olasupo, warned that the protracted controversy would take a toll on the students.

“Regardless of the angle we want to look at it, the students are at the receiving end of the whole saga. WAEC, NECO, UTME and NABTEB won’t create a special timetable for the students. Covid-19 has disrupted the ways of working and education was one of the sectors that was grossly affected owing to the fact that we do not have the necessary technology and infrastructure for e-learning in Nigeria.”

Mr Olasupo also condemned the violence that erupted at Baptist Secondary School on Wednesday and called for prosecution of those involved.

“Kudos to the government and other stakeholders for not allowing the issue to snowball into something that will get out of hand, but it could have been avoided.

“The case has been decided by the court and if there is anything the government should do immediately, it is to change the names of the schools,” the civil rights activist advised.

Also, the President of Shehu Alimi Foundation, Abdulkadir Sholagberu, urged the state government to change the names of the schools.

“It is an affront for any person or groups to claim ownership of any establishment funded with taxpayers’ money,” Mr Sholagberu said in a statement.

“Irrespective of their faith, the government should change names of all missionary schools belonging to both Christians and Muslims in the state. Let us all remember that the government is solely responsible for the recruitment, promotion, transfer as well as termination of appointments of workers of the schools.

“Government should stand up to its duties by enforcing the formula adopted in the case of Ilorin College Ilorin which was established by the first Senior Advocate of Nigeria (SAN) in the Northern Region and father of the incumbent governor of Kwara State, late Lawyer A.G.F. Abdulrazaq, and was later changed to become Government High School, Adeta-Ilorin when the government commenced grant aiding of the school.

He advised Muslims and residents of Ilorin to remain calm and law abiding in their dispositions.

However, the state government has directed the principals, teachers and staff of all 10 schools shut down to report at the schools on Friday.

The chairperson of the state’s Teaching Service Commission, Bello Abubakar, said this was necessary to prepare the final year students for their external examinations.