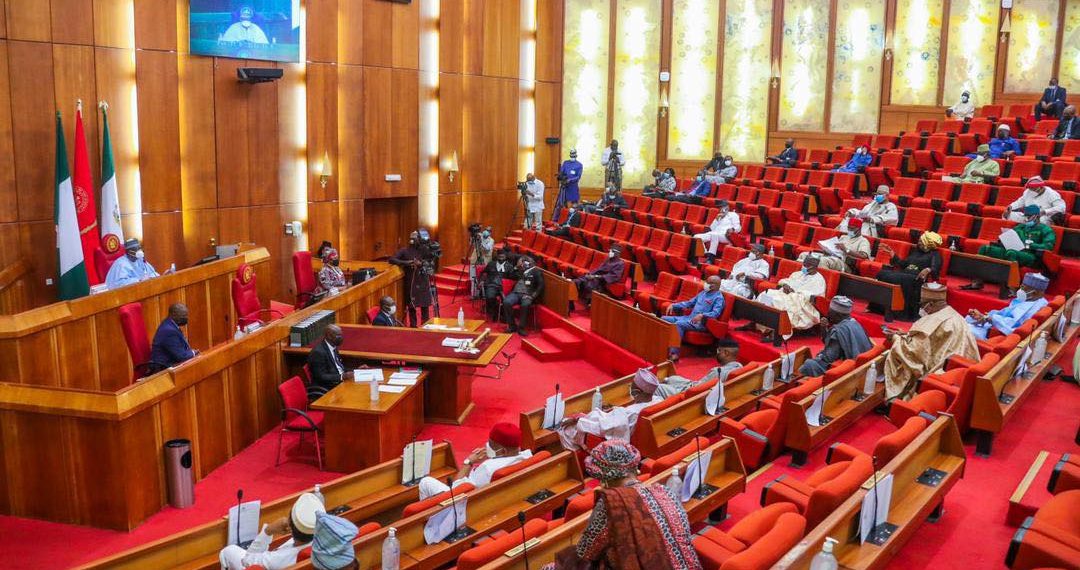 The senators rose from an executive session and appealed to the sponsor of the bill, Enyinnaya Abaribe, to withdraw it.

What started as a simple debate for the second reading of a bill soon turned into a rowdy session at the Senate on Wednesday.

Some lawmakers lost their cool in a heated argument and were forced to go into an executive session to calm their nerves and resolve the issue at hand.

It began when the Senate Minority Leader, Enyinnaya Abaribe (PDP, Abia South), presented the lead debate of a bill for the Establishment of the Armed Forces Commission 2021 for second reading.

The bill was read for the first time in the Senate in March 2020.

The bill, he said, seeks to, among other things, address the “lopsided appointment” of heads of security agencies by the president.

This comes barely a month after the Senate confirmed the new set of service chiefs appointed by President Muhammadu Buhari.

In his debate, Mr Abaribe said the function and powers of the Commission shall be to ensure that the composition or appointment of Service Chiefs of the Armed Forces reflects the federal character of Nigeria in the manner prescribed in section 217(3) of the 1999 Constitution.

It will also recommend to the president from among the best and most qualified, most educated and most experienced members of the Armed Forces for appointment as Chief of Defence Staff, Chief of Army Staff, Chief of Air Staff, Chief of Naval Staff, Director of Military Intelligence, and Heads of other Arms-bearing Security Agencies and ensure that such appointments reflect the federal character of Nigeria.

This bill also seeks to get the National Assembly to give effect to the clear provisions of section 219 of the Constitution.

“The Armed Forces of Nigeria is a national institution of Nigeria that should be insulated by the vagaries of political divisions and therefore the framers of the constitution in their wisdom inserted this section to prevent a situation where our National symbol of unity and strength could be sacrificed on the altar of political temperament.

“This Bill seeks to establish the Armed Forces Services Commission to ensure that the composition/appointment of Service Chiefs of the Armed Forces of the Federation reflects Federal Character of Nigeria in the manner prescribed in section 217 (3) of the 1999 Constitution,” he said.

The commission, he said, will also have powers to recommend officers for promotion or removal as the case may be.

About 13 lawmakers thereafter took turns to deliberate upon the bill. While some supported the legislation, others rejected it outright.

ID Gyang (PDP, Plateau North) was the first to support the bill. The proposed commission, he said, does not offend the constitution. And the principle of upholding federal character will strengthen the unity of Nigeria.

Opeyemi Bamidele (APC, Ekiti Central) noted that Section 219 of the constitution is clear and does not stop the National Assembly from seeking the establishment of a commission.

“Yes, there is an Army and Navy council. Let this National Assembly take the decision that representatives of the council shall become members of the commission,” he said.

“Those who may not want a standardized process of recruitment cannot run away from the fact that such decisions will be shrouded in secrecy.

The Senate Leader, Abdullahi Yahaya, also supported the bill, stating that it stands on very solid constitutional ground and it is the duty of the Senate to provide an institution.

On the opposing side was Francis Alimekhena (APC, Edo North) who said the bill will create disunity in the operation of the Armed Forces.

“The commission cannot take the function of the service chiefs and the Armed Forces will be caged. The service chiefs are in the best position to know the officers to recommend for promotion and so on. I urge the sponsor to look at it again,” he said.

Ibrahim Oloriegbe (APC, Kwara Central) also opposed the bill, stating that the commission will be a mere creation of a bureaucratic set up and will not let the Armed Forces do what they are supposed to do.

Abdullahi Adamu (APC, Nasarawa West) questioned why Mr Abaribe chose to bring up the bill at this time.

This is the worst period, after the Biafran war which overstretched the unity of the armed forces, to bring it up, he said.

His comment stirred uproar in the chamber for some seconds.

“The appointment of the current service chiefs gave birth to this bill. It amounts to almost blackmailing the National Assembly. The sponsor has been a senator long enough, why now? The timing is wrong,” he continued.

Senators Adamu Aliero (Kebbi), Adamu Bulkachuwa (Bauchi) and Danjuma Goje (Gombe) all spoke against the bill and asked the sponsor to drop it.

They said the bill will not only compromise the integrity and neutrality of the Armed Forces but also undermine the constitution.

Then came the drama…

After the debate ,which lasted for about an hour, the question for the bill to be read the second time was put to vote by the Senate President, Ahmad Lawan.

After a voice vote, with resounding ‘ayes’ and ‘nays’, Mr Lawan ruled against the bill.

A seemingly unsatisfied Mr Abaribe thereafter stood up and called for physical voting by all lawmakers, invoking Order 73 of the Senate Standing Rule, to back his demand.

The Order permits for a physical vote on an issue should a lawmaker be unsatisfied with the ruling and/or opinion of the Senate President or chairman of the plenary.

This launched the chamber into a rowdy session as many lawmakers opposed the order. This was followed by a moment of verbal exchange between the Messrs Lawan, Omo-Agege and a few others.

For about ten minutes, the lawmakers were seen moving from one seat to another arguing inaudibly with Mr Abaribe insisting that “everyone present must get up and vote.”

In a bid to calm the angry lawmakers and resolve the issue, Mr Lawan called for an executive session.

The meeting behind closed doors lasted for about 25 minutes after which Mr Lawan announced that the Senate had reviewed the issue and various factors including the national interest. This time, the chamber was calm.

“We have agreed that the senate will work together in a nonpartisan manner and we have appealed to the Minority Leader to withdraw the Order 73.

“We have also appealed that he should withdraw the bill…he or any other lawmaker can bring it up in the future…,” the Senate President said.

The Minority Leader thereafter, withdrew the Standing Order and stood down the bill to review it and present it another time.

The Senate Spokesperson, Ajibola Basiru, had described the event of the day as a proof of maturity and democracy in the Senate and the National Assembly in general.