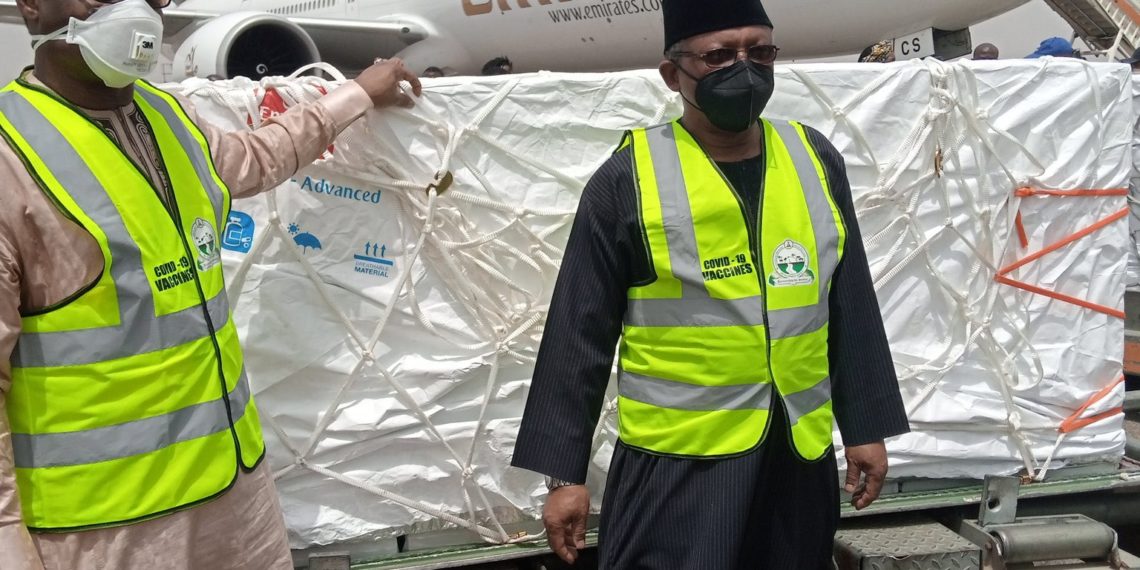 Nigeria takes delivery of the first batch of Oxford-AstraZeneca #COVID19Vaccines from #COVAX.

COVID-19: Nigeria says AstraZeneca vaccines are safe, distributes to all states but one

The Nigerian government says the AstraZeneca vaccine is safe for use.

As the controversy over the safety of the Oxford-AstraZeneca vaccine continued on Monday, the Nigerian government assured of its safety as the country distributes almost four million doses of the vaccine.

At least  three European countries – Germany, France and Italy – on Monday joined a few others who had suspended the use of the AstraZeneca vaccine.

However, the Nigerian government assured its citizens that it had tested the vaccines and they were safe for use, echoing the view of the World Health Organisation and many other countries including the UK.

A Nigerian official also said all Nigerian states but one had received doses of the Oxford-Astrazeneca COVID-19 vaccines except.

“The Oxford-AstraZeneca vaccines have been distributed to all states except Kogi state,” the Executive Director of the National Primary Health Care Development Agency (NPHCDA), Faisal Shuaib, said at the weekly briefing of the Presidential Task Force (PTF) on COVID-19.

Mr Shuaib said Kogi State was not supplied with its portion of the vaccines due to a lack of adequate storage facility.

“Kogi State was not supplied with the vaccines because their cold store is still under repairs following vandalisation during the EndSARS protest,” he said.

Nigeria took delivery of 3.94 million doses of Oxford-AstraZeneca COVID-19 vaccines in early March and has since begun administration to prioritised groups.

Mr Shuaib last Monday said the government has started distributing doses of the COVID-19 vaccines to various states across the country.

He explained that the delivery of the vaccines to the states is predicated on satisfactorily meeting the conditions to keep them safe and potent.

He, however, did not disclose the amount of COVID-19 vaccines each state received.

Kogi State has been enmeshed in controversy since the outbreak of COVID-19 with the state governor initially denying the existence of the virus and then discouraging COVID-19 tests in the state.

Kogi, a state of about 3.5 million people, is thus the least impacted across the country with a total of just five infections. Two patients have died and the remaining three have since recovered. The last fatality was recorded in early June, 2020.

The PTF on COVID-19 had in February declared Kogi a high-risk state for refusing to acknowledge the existence of the disease.

The PTF said the state government had failed to report testing, lacked isolation centres, and, therefore, warned Nigerians to be wary of visiting the state.

Mr Bello has repeatedly made controversial and false statements about the coronavirus pandemic, a situation that pitted him against federal officials and health professionals.

The governor had in one instance described the deadly disease as a hoax.

Since the pandemic broke out in February 2020, Nigeria has carried out over 1.6 million tests of which over 160,000 cases have been found and a total of 145,399 patients have recovered across the country.

About 2,013 fatalities have also been recorded from the virus.

Although there have been growing concerns over the safety of the Oxford-AstraZeneca vaccines, the Nigerian government said the vaccines are safe and effective.

This is coming about two months after South Africa rejected about 1.5 million doses of the same vaccine after evidence emerged that the vaccine did not protect clinical-trial participants from mild or moderate illness caused by the more contagious virus variant that was first seen in the country.

Over  seven European countries have also suspended the use of the Oxford-AstraZeneca vaccines citing blood clotting difficulties and a death suspected to be from its usage.

“The Nigerian authorities have tested and authorized the use of the vaccines because it is safe and efficacious,” the chairman of the PTF, Boss Mustapha, said at the Monday briefing.

He said the government will always prioritize the health of its citizens.

The AstraZeneca vaccines are important especially to the COVAX arrangement, a WHO programme that promises access to vaccines for up to 20 per cent of participating countries’ population.

Because it is relatively cheap, easy to make, and store, the AstraZeneca vaccine is regarded as the most suitable for developing countries like Nigeria.

Why Nigerian women are no longer submissive to men -Pete Edochie