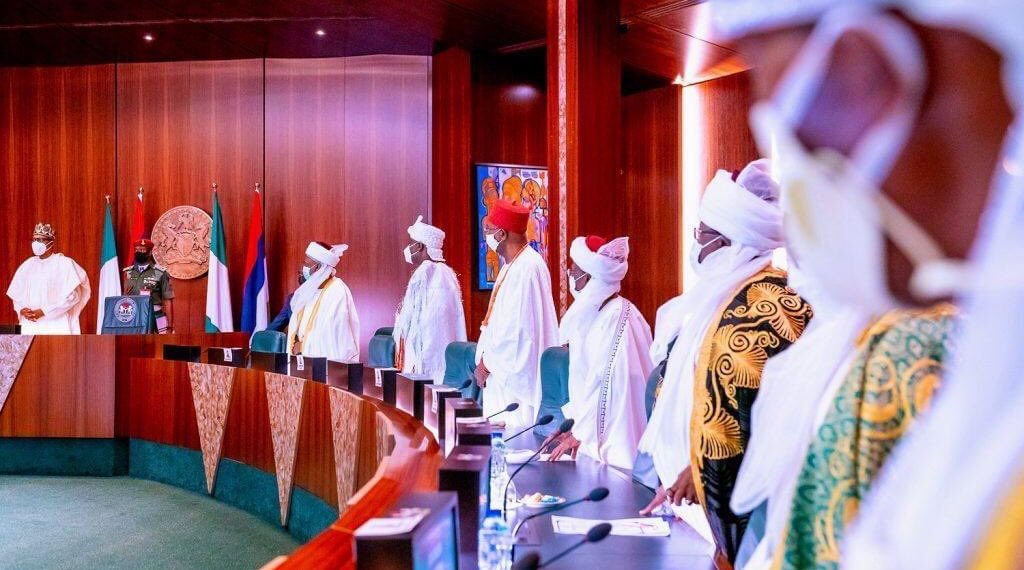 President Muhammadu Buhari in a meeting with the National Council of Traditional Rulers of Nigeria at the State House, Abuja.

The traditional rulers say the security situation is hard on their people and there is a need to take urgent and immediate steps to check the situation.

The National Council of Traditional Rulers of Nigeria, the umbrella body of all traditional rulers in the country, has called on the federal government to urgently address the nation’s security challenges.

The traditional rulers, who made the appeal at the end of a meeting with President Muhammadu Buhari at the State House, Abuja on Thursday, expressed concern over cases of kidnappings and banditry in some parts of the country.

The Etsu Nupe, Yahaya Abubakar, who spoke on behalf of the traditional rulers, said their meeting with the president harped on the need for the government to urgently curb the menace.

According to him, “the royal fathers have decided to go back to the old tradition of identifying visitors in their domains and also share intelligence with security agencies, so as to ameliorate the situation”.

He said they offered to help the government address the problem by sharing intelligence with security agencies.

Mr Abubakar said, “We commiserate with the president on current happenings, especially banditry activities, killings, kidnapping and destruction of lives and property in the country.

“We discovered that the situation is getting too much on our people, our land, our culture and tradition. So, we feel as traditional leaders, we are close to our people and we know what is happening to them.

“So, we narrated stories of this banditry and other crimes to the president, as we see it in our domains.

“We requested that the president should consider and put us in a position whereby we can directly or indirectly help the situation so as to curtail these excessive insecurity activities.’’

Mr Abubakar commended the Buhari administration for its efforts aimed at uplifting the quality of life of the citizens.

Premium Times earlier reported how the president on Thursday in Abuja said security chiefs have received marching orders to go harder on criminals, including to shoot anyone found illegally with AK-47.

The President spoke at the meeting with the traditional rulers at the State House. The council is co-chaired by the Sultan of Sokoto, Muhammad Sa’ad Abubakar III and the Ooni of Ife, Adeyeye Enitan Ogunwusi.

The President, who apprised the meeting with efforts by the government to improve the security situation in the country, said his administration has recorded appreciable successes in the North-east and South-south parts of the country.

‘‘But what surprises is what is happening now in the North-west where the same people, with the same culture are killing each other, taking their livestock and burning properties.

‘‘As a result of that, we had a four-hour meeting of the National Security Council attended by the Ministers of Internal Affairs, Defence, Foreign Affairs, Service Chiefs, Chief of Defence Staff, the Inspector-General of Police and others and we gave clear instructions.

‘‘One thing that got to the press which I read myself was that anyone with an AK-47 will be shot.

‘‘This is because AK-47 is supposed to be registered and it is only given to security officials.

‘‘We closed the borders for some years but the intelligence report I’m getting on a daily basis is that those who are conducting the abductions, the killings and so on are still not short of arms and ammunition,’’ he said.

The President also expressed dismay on the attacks on police stations and killings of security personnel by criminals, warning that no investor will invest in a country that is unsafe.

Many parts of the country are currently ravaged by insecurity and crime in the midst of the apparent helplessness of security agencies to nip the menace in the bud.