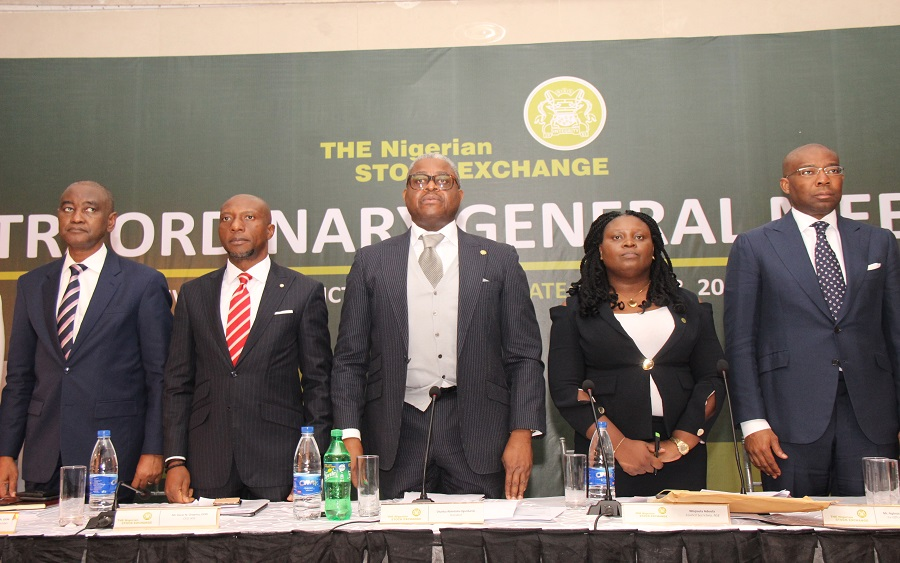 The shift makes the NSE the 57th exchange in the world to embrace such a transformation since Sweden’s Stockholm Stock Exchange piloted the move in 1993.

The Nigerian Stock Exchange (NSE) will henceforth run as a public company limited by shares, rather than a private company limited by guarantee of owners or members after consummating a demutualisation process that spanned about 11 years.

The shift makes the NSE the 57th exchange in the world to embrace such a transformation since Sweden’s Stockholm Stock Exchange piloted the move in 1993.

The exchange is at liberty to list its own shares and trade them on the bourse like every other quoted firm now that approvals from market watchdog Securities and Exchange Commission (SEC), and Corporate Affairs Commission (CAC) are now in the bag.

“Under the demutualisation plan, a new non-operating holding company, the Nigerian Exchange Group Plc (‘NGX Group’) has been created,” the NSE said Wednesday in a statement.

Half a century old, Lagos-based NSE has lived off members’ contributions all its life right from inception in 1960, allowing the members who own the exchange to run it at the same time.

But the new corporate structure will put in place a board of directors to watch over its affairs.

Extending its ownership to the public is hoped to help transform it to a profit-oriented business that should take accountability and commitment to the interests of diverse individual and institutional investors pretty seriously.

It could also be the turning point in corporate governance for an exchange that is sometimes beset with allegations of market abuse, insider dealing and operational compromise.

The road to demutualisation has been bumpy and scaling regulatory hurdles have come at a cost. Around 2011, a technical panel was commissioned to develop its legal structure, culminating in the issuance of Rules on Demutualisation of Securities Exchanges in Nigeria by SEC in 2015.

But impediments stood on its way and no major progress was made until 2017 when the plan advanced further.

Even at a time when the NSE met most of the preconditions for demutualisation, there was no share capital to make it attain public company status.

The Demutualisation of the Nigerian Stock Exchange Bill was passed separately by the Senate and the House of Representatives in December 2017 and February 2018.

“At the Nigerian Stock Exchange, we have a vision that the new group will become the premier exchange hub for Nigerian businesses and for the African economy,” said Oscar Onyema, group chief executive officer of the NGX Group Plc.

“We are implementing a series of measures towards this goal, demutualisation being a critical milestone. The completion of demutualisation is a truly significant moment, and we welcome the new possibilities that have opened up for us today.”