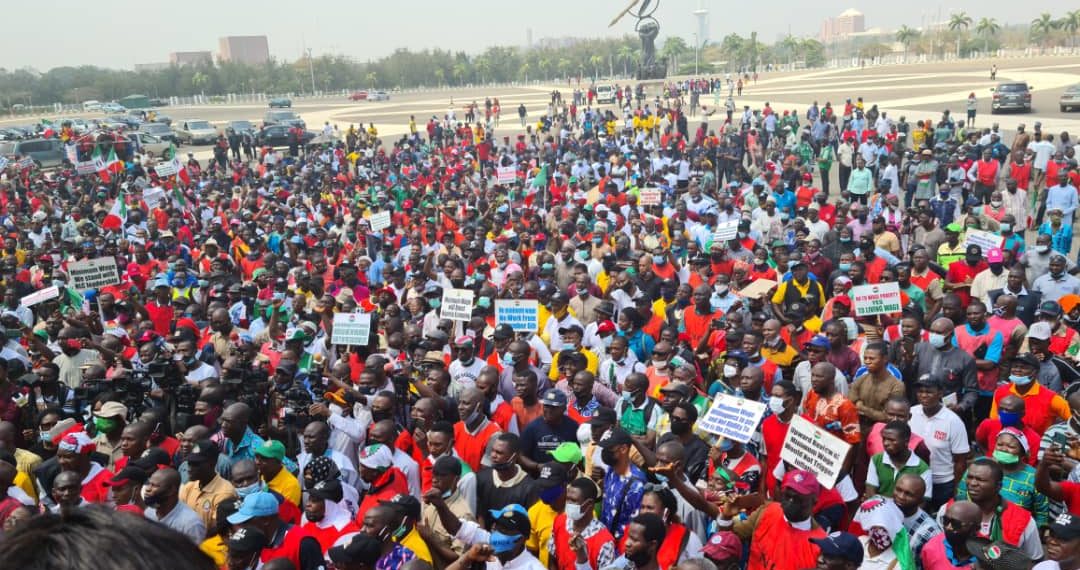 The National Assembly is considering a bill that would change the way minimum wage is negotiated.

Members of the Nigerian Labour Congress (NLC) and the Trade Union Congress (TUC) marched into the National Assembly on Wednesday to protest against moves by lawmakers to remove minimum wage matters from the exclusive legislative list to the concurrent legislative list.

This is in reaction to a bill that passed second reading at the House of Representatives in February.

The bill seeks to remove minimum wage matters from the exclusive list to the concurrent list. It passed the second reading in the House of Representatives on February 23.

Should the bill become law, the federal government will not have exclusive jurisdiction to determine a national minimum wage and states will now have the power to determine their own minimum wages,

The sponsor of the bill, Garba Mohammed (APC, Kano), had said the bill is to allow both the federal and state governments to freely negotiate minimum wage “with their workers in line with our federalism.”

But Nigerian workers unions are opposing the bill. They argued that some states are currently trying to reduce the N30,000 minimum wage recently signed into law by President Muhammadu Buhari.

The protesters gathered at the National Assembly arcade with many carrying placards with different inscriptions.

NLC President Ayuba Wabba, who led the protest, decried how little and insufficient the current minimum wage is, especially with the current exchange rate.

He described the bill as an attempt by some lawmakers to undermine Nigeria’s working class.

Also, the TUC President, Quadri Olaleye, made the same call as he condemned the failure of some state governments to implement the new minimum wage.

The groups further demanded that state governments yet to implement the new national minimum wage should commence negotiations with the Joint Negotiation Council in their respective states to avoid a declaration of a trade dispute.

The lawmakers who received the letters promised to relay their concerns to the National Assembly leadership.

On Early Marriage and the International Women’s Day, By Yushau A. Shuaib