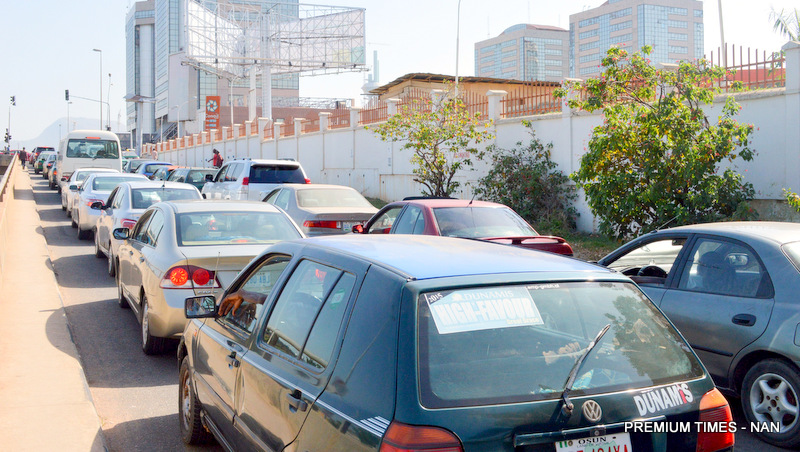 A PREMIUM TIMES examination of the scarcity shows the hike in price was not market-driven.

Nigerians were last week thrown into confusion as fuel scarcity hit Lagos, Abuja, and several other cities across the country.

Residents besieged fuel stations in major cities across the country, in anticipation of yet another season of fuel crisis. Motorists scrambled to fill their tanks as long queues resurfaced in petrol stations.

The scarcity, at a time of a global rise in crude oil prices, shook the nation despite the assurance given by the Nigerian National Petroleum Corporation (NNPC) that there would be no increase in the ex-depot and pump prices of petrol in February and March.

Similar ordeals were experienced by residents of Otta, Ogun State; Ibadan, Oyo State; Ilorin, Kwara State, and in numerous other cities across the country.

At the height of the petrol scarcity and hike in prices, many Nigerians kept asking what the cause of their ordeal was since the NNPC had ruled out increasing rates.

The scarcity followed an earlier move by petrol marketers to disrupt loading of petroleum products at private depots in Lagos and other parts of the country, in protest against a new payment method.

Earlier in February, some marketers had disrupted Apapa, Ibadan, Ejigbo and Mosimi depots belonging to the NNPC.

Shina Amoo, the Chairman of the Independent Petroleum Marketers Association of Nigeria (IPMAN), Ore Depot, explained that with the new arrangement, major marketers and very few independent marketers with huge funds could pay for 200 trucks and load them while those who had paid for one or two trucks would be on queue for many months unattended to.

Apart from the new payment concern, oil marketers attributed the scarcity to what seemed like the possibility of the government increasing the ex-depot price of petrol.

This was a source of concern for many marketers despite the government’s assurance that it would not increase ex-depot price, pegged at N153 as of last November.

In the midst of the scarcity and increase in pump prices across the country, the Department of Petroleum Resources threatened to sanction marketers caught perpetrating irregularities, including hoarding and profiteering.

The Director of DPR, Sarki Auwalu, said the agency had set up a special taskforce to intensify surveillance and monitoring of all retail outlets and depots nationwide to “check the anomaly”.

In a statement by Paul Osu, Head of Public Affairs at DPR, Mr Auwalu also advised the public against panic buying, adding that DPR will continue to “provide its regulatory focus of quality, quantity, integrity and safety, QQIS for the effective operations of the downstream sector”.

But contrary to the DPR’s threats, PREMIUM TIMES’ findings showed that marketers were buying petrol at high prices from depots, making it almost impossible for them to sell to Nigerians at the government’s approved prices. Others could not even get petroleum products at all in major depots around Lagos.

In recent years, the NNPC has been the sole importer of petrol into the country. The corporation typically sells to depot owners who in turn sell to retail outlets, from whom Nigerians buy at fuel stations.

The NNPC has made it clear over time that it has not hiked the ex-depot price of petrol, and PREMIUM TIMES findings showed that the hoarding and hike in price were introduced by depot owners in anticipation of a hike in price amidst oil price rally.

Brent crude on Monday hit over $70 per barrel for the first time since January 2020.

To unravel the concerns around the scarcity and hike in prices, a PREMIUM TIMES’ reporter posed as an oil marketer during a visit to oil depots in Lagos.

When this newspaper visited depots in the Apapa area of Lagos on Wednesday, our reporter observed that the depot prices for petrol ranged between N160.5 and N163, as against the N155 announced earlier by the NNPC.

By implication, retail outlets and marketers could not afford to sell the products at anything less than between N167 and N170, an oil marketer who introduced himself simply as James told this reporter.

“For those who take the fuel to remote villages, they will run into heavy losses if they sell at anything less than N170,” he argued.

“Some of those lifting petrol today paid between N162 and N163, and they paid weeks ago,” an official told this reporter at the entrance of the depot. “How do you want them to sell at N163 at the pump level?”

He explained further that the uncertainties account for the refusal of many depots to sell petrol to marketers, amid poor oversight by regulatory officials.

“There is even no petrol right now as I speak to you, and that’s why Nigerians now contend with queues, scarcity, and increase in prices,” he said.

When this reporter posed as a potential marketer, another official agreed to source petrol product at depots located around the Coconut axis of Apapa. After making some calls, he insisted however that the only depot owner that agreed to supply the product could only sell at N162.

At one of the depots around Abule-Ado, an official said he would only agree to sell petrol at N160.5 upon seeing our reporter’s trucks.

Meanwhile, across all of the depots visited by PREMIUM TIMES in Apapa on Wednesday, there was no presence of DPR and NNPC officials.

“They (NNPC/DPR officials) are playing games,” a staff at one of the depots said in response to PREMIUM TIMES’ enquiry about the threats from DPR.

“They act tough outside just so Nigerians would say that they are working. But if depot owners are doing anything bad here, why are they not here—-as you can see for yourself?

“The point is that NNPC will soon increase the ex-depot and pump prices officially, because that is why depots increased their prices. It’s just a matter of ‘when’.”

On Monday, queues gradually disappeared at petrol stations in Lagos and other parts of the country.

A marketer told this newspaper that there has been relative improvement in supply at the depots, although “the prices are still high.”

However, it remains to be seen if the development would indeed translate to relief for many Nigerians, especially in the face of oil price rally.

Marketers told PREMIUM TIMES in separate interviews that the expectation of price hike is attributed to the rise in oil prices in the international market, because a rise in oil price would affect the landing cost, ex-depot price, and pump price.

At the weekend, an oil marketer who declined to have his name in print told PREMIUM TIMES that the ex-depot price has not been hiked by the NNPC, but the corporation would have to raise the price on the long run as oil prices rally.

“The fact is that the price will still go up (sic),” he said.

He insisted, however, that if the price is not increased in tandem with the reality in the international oil market, there will still be a repeat of scarcity, hoarding, and arbitrary hike in pump prices.

An official of the Major Oil Marketers Association of Nigeria, MOMAN, told PREMIUM TIMES that from the association’s end, they had noticed no increase in ex-depot price.

“Surges in local demand created by price uncertainty and panic buying are likely to cause queues as the supply chain struggles to meet the increased demand,” the official, who asked not be named, said.

“Having said that, a lot of the increased demand is probably short term and will regularize once speculations and market distortions are eliminated.

“We therefore discourage panic buying as PPMC has reassured that there is enough product in-country to meet Nigeria’s local demand.”

Several calls to the president of the Independent Petroleum Marketers Association of Nigeria, IPMAN, Chinedu Okonkwo, were not answered over days.

Editor’s Note: This post has been updated to properly reflect the comments by an official of MOMAN.