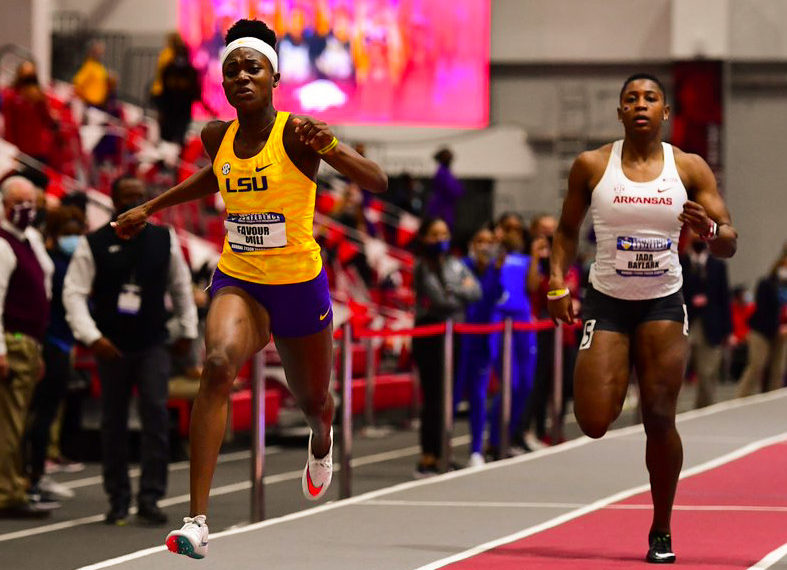 The impressive performance of Nigerian athletes in the build-up to the Tokyo Olympic Games continued on Saturday as Favour Ofili raced to a new African and National Record while competing at the Southeastern Conference indoor championships.

The 18-year-old finished third in the 200 meters with a new Personal Best time of 22.75 which dwarfs the former Nigeria national record of 23.00s held by Regina George and by extension the African Record hitherto held by Ivorian athlete, Murielle Ahouré at 22.80

George at the SEC Championships held at Fayetteville, United States set the previous National Record of 23.00s in 2013 while Ahoure’s mark was set in 2009.

Aside from setting a new National record, Ofili’s time was the third-fastest in her school’s history and it is also an Olympic Standard which adds her to the list of Nigerian athletes that have hit the mark for the Olympic Games in Tokyo.

She ran the second leg and returned the best split time among the quartet at 52.09.

At 16 years and 273 days-old, Ofili was the youngest competitor in an individual event at the Doha 2019 IAAF World Athletics Championships where she took part in the women’s 400m event.

Even at her tender age, Ofili is already doing great in the colours of Nigeria.

At the last African Games in Morocco, she finished second in the 400m and doubled her success anchoring the Nigerian team to the 4x400m relay gold.

Already, the Athletics Federation of Nigeria has congratulated Ofili for her wonderful performances.