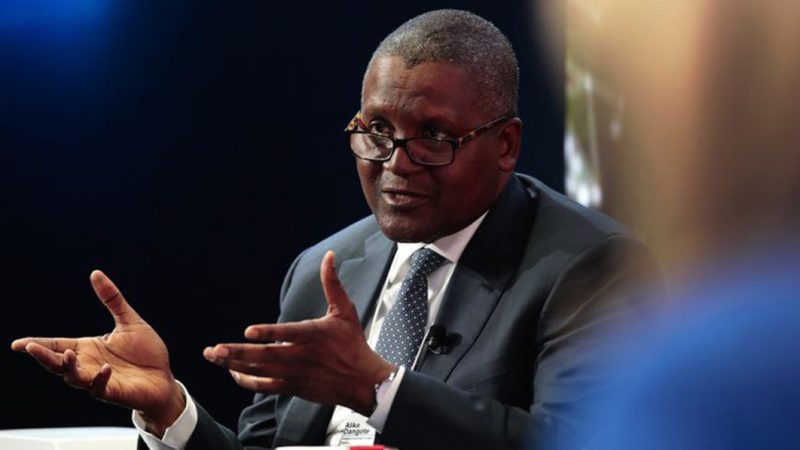 Autumn Spikes, an ex-girlfriend of billionaire businessman, Aliko Dangote, said she was “insultingly” offered $15,000 and another $2,500 monthly by the African richest man to keep quiet over their affair.

Ms Spikes, who disclosed this in a post via her Instagram handle, @allounda1, on Monday, is instead, demanding $5 million in exchange for the Non-Disclosure Agreement (NDA) requested by Mr Dangote.

“I was insultingly offered 15k and 2,500 a month to sign an NDA but I declined,” Ms Spikes stated in the post.

She did not disclose how long Mr Dangote allegedly offered to pay her the monthly $2,500, but went further to state, “I gained legal counsel in which we countered his offer. Mind you his first initial offer wasn’t disclosed in the terms of his proposed NDA.”

“Therefore I was pressured and influenced to sign which was already a violation of his own NDA,” she added in the post which PREMIUM TIMES saw on Thursday.

The affair between the former lovers came to limelight on January 1 when Ms Spikes shared a viral video clip showing her seated beside Mr Dangote who was lying down on the same couch, with part of his buttocks exposed.

Mr Dangote recently ended the affair that lasted about10 years and asked for an NDA in return, one of Ms Spikes’ lawyers, Paul Petruzzi, said in a January 13 email to the billionaire’s lawyer, Bruce Fleisher.

PREMIUM TIMES exclusively reported on Wednesday how Mr Dangote sued Ms Spikes in a U.S. court in Florida, accusing her of trying to extort $5 million, (about N1.9 billion at official exchange rate), from him.

Mr Dangote, who instituted the legal action using a pseudonym, John Doe, to escape public attention, alleged in the suit filed on January 22 that Ms Spikes had threatened to embarrass him by taking the details of their affairs to the social media and media talk shows in violation of an existing NDA between them.

Ms Spikes shared a part of a page of Mr Dangote’s court documents filed at a Miami-Dade County Court in Florida, through her Monday’s Instagram post.

She denied threatening Mr Dangote with blackmails on the social media or through media talk shows as claimed by the billionaire businessman in his suit.

The lady maintained that she had kept her affair with Mr Dangote private. She expressed surprise that she could be sued for extortion by the wealthy businessman.

“He denied knowing me and our relationship to his lawyers and we’re asked for proof of our affair…now I’m being sued for extortion?

“This is such a manly egotistical move. I’ve kept it private but you made it public with the lawsuit.

“All these claims of interviews and talk show threats will have to be proved in court so… & I haven’t spoke (sic) to anyone regarding our relationship.”

In the post asking her followers to express their thoughts about the billionaire’s suit, Ms Spikes said she brought it up for discussion because the matter had become a public record.

“I have not been served. Since this is a public record, let’s discuss it. What are your thoughts?”

‘Dangote’s suit will be dismissed’

Responding to a comment by an Instagram user, @buy2day_wear, Ms Spikes expressed confidence that Mr Dangote’s suit against her would be dismissed by the court “because of lack of evidence”.

In the comment posted to boost Ms Spikes morale to stand up to Mr Dangote, the Instagram user, stated, “Dont let anyone bully you into submission”.

The commentator added that “Nigerian wealthy elites are used to getting away with treating women like they are disposable toys”.

The Instagram user also stated, “Set a precedent with Aliko in the U.S. so they are all aware that the justice system cannot be twisted for their selfish interest. Ignore Nigerian losers typing rubbish here, they are ignorant at best. Nine is a long time to be with someone. The least he can do is settle privately and move on. I wish you luck.”

Replying the comment, Ms Spikes posted: “actually this is going to get dismissed immediately there is a thing called discovery where you have to provide proof.”

But one of her Instagram followers warned, “Dayummmm 😭 Gurlllll you are in for this! A billionaire? You are innnnn for this ! All the best to you.”

EPL Round Up: Sheffield stun Manchester United at Old Trafford

COVID-19 worsens in Nigeria with 22 deaths, 1,861 new infections on Wednesday