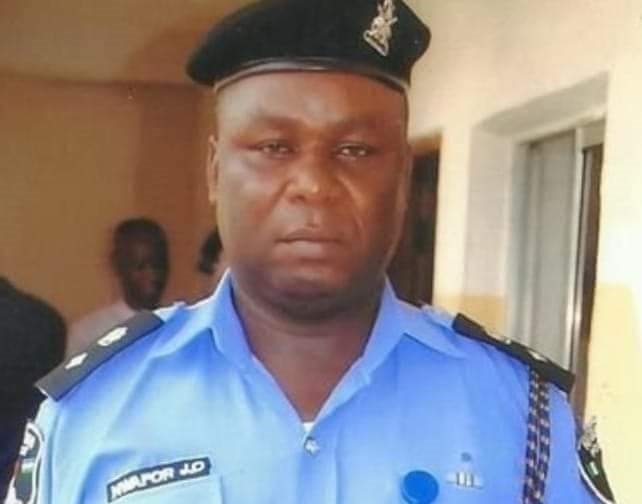 James Nwafor appeared in 90 per cent of the 18 petitions heard so far in Anambra state, Abdul Mahmud, a human rights lawyer present at the sitting of the judicial panel confirmed to PREMIUM TIMES.

This newspaper had earlier obtained copies of some petitions submitted to the Judicial Panel of Inquiry investigating police brutality in the state. Mr Nwafor was named as a major culprit in the petitions reviewed by this medium.

According to official records, he was appointed the commander of the Awkuzu SARS in 2012, an office he occupied till January 2016 when he was transferred to Bauchi State.

However, in September 2016, Mr Nwafor was again transferred back to his Awkuzu office, where he was until 2018 when he finally bowed out of the Nigeria Police.

Upon retirement, he was appointed a senior special assistant on security to the incumbent Governor of Anambra, Willie Obiano, in 2018.

Mr Obiano relieved him of his appointment during the #EndSARS protest when his name was repeatedly mentioned by protesters.

While in office, several cases of human rights violations and extra-judicial killings were reported but nothing was done by the police authorities.

In fact, a report by Amnesty International, a global rights organisation, also indicted him.

“Human rights defenders in Nigeria cited the case of James Nwafor who headed the SARS unit in Awkuzu, Anambra state. Despite several petitions from lawyers and HRDs detailing his involvement in torture and extrajudicial executions, he was merely transferred to Bauchi police command in January 2016. However in September 2016 James Nwafor was again transferred back to SARS unit Awkuzu,” the report stated, pointing out the lackadaisical attitude of the authorities to multiple calls for prosecution.

The organisation also kicked against the plan of the Onitsha branch of the Nigeria Bar Association (NBA) to give Mr Nwafor an award for his alleged contribution to the defense of human rights in 2018.

Amnesty International, in its reaction, stated that the award was a disgrace to the Nigerian bar.

“For the purpose of clarity, James Nwafor’s time as the Commander of SARS, Awkuzu, Anambra State was characterised by unspeakable human rights atrocities.

“During his reign at SARS, Amnesty International carried out research on incidences of torture for two different periods (2014 and 2016) and produced damning reports which were widely circulated in Nigeria and abroad.

“The two reports not only indicted James Nwafor, but found that SARS Awkuzu under him was the headquarters of human rights violations, particularly torture, cruel, inhuman or degrading treatment, and extrajudicial executions.”

Some of the alleged atrocities of the ex-police officer were not brought to fore until the #EndSARS protest started in October.

The protest against police brutality by Nigerian youth gained traction across the globe.

Prominent individuals and organisations across the world joined their voices with that of the youths staging demonstrations across major cities in the country.

It was during the heat of the protest that Mr Obiano sacked Mr Nwafor as his security aide, following multiple reports of unlawful actions while in the police service.

“James Nwafor, former OC SARS in Anambra State is sacked and will be prosecuted,” Mr Obiano said, while addressing youth in the state.

In the petitions received by the Veronica Umeh-led panel of Inquiry in Anambra State, several families presented their cases, demanding the prosecution of Mr Nwafor over the illegal detention and extrajudicial killing of their loved ones.

PREMIUM TIMES earlier reported how the family of late Ekene Akabike, a student of the Nnamdi Azikiwe University (UNIZIK) Awka, Anambra state, allegedly murdered by SARS operatives in 2004, approached the panel for justice.

The family decried how Mr Nwafor lied to them before he later informed them about the death of their son.

“D’Lawrence (the victim’s elder brother) went back to SARS Awkuzu on Friday 11 June 2004 where CSP Nwafor told him point-blank that he has been wasting his time, that his brother was killed since 3 June, the day of arrest,” the petition read.

Asides the prosecution of Mr Nwafor, the family wants N100 million as compensation for the unlawful acts.

Also, Okwuchukwu Onyemelue, a graduate of Architecture, was arrested by SARS operatives on June 24, 2014, a time Mr Nwafor headed the unit.

According to the relatives, in a petition obtained by PREMIUM TIMES, Mr Onyemulue was in the company of his sister when officers of SARS Awkuzu stormed their father’s residence in Onitsha, Anambra state.

After severe beating, Mr Onyemulue was detained by the police and denied access to any of his relatives or an attorney, as stipulated by the law.

“While Okwuchukwu was in detention, members of his family kept visiting SARS Awkuzu with the hope of seeing him. They were prevented by CSP James Nwafor from seeing him,” the petitioners said.

They claimed that after several visits, spanning years, Mr Nwafor told Mr Onyemulue’s father that he killed his son.

Another case of extra-judicial killing presented to the panel is that of Chijioke Iloanya, who was arrested on November 29, 2012, by Mr Nwafor’s team.

“Chijioke insisted he would go for his friend’s child dedication in Ajali even when their mum asked him not to. It was at this child dedication that officers from Ajali police station rounded up everyone who was at the celebration including Chijioke, from where they were transferred to the Special Anti Robbery Squad (SARS) Awkwuzu,” Mr Chijioke’s sister said.

Ms Iloanya said “the last time any member of the family saw Chijioke was the day her parents went to SARS office in Awkuzu. Our mum saw her son in their premises, (but) the officer in charge, James Nwafor, denied he was there. Some officers said he was bluffing and told my parents he wanted them to bring money.”

Ms Iloanya said her parents could not afford to make any offers because they had no money.

“I was only 17 when Mr Nwafor told my parents that he had killed my brother; he looked my dad in the face and told my dad, he could not do anything.”

Eight years later, the Iloanyas are yet to get closure on the whereabouts of their son and brother.

Another petition indicting Mr Nwafor came in from Uzoamaka Ugwuebuchi whose brother disappeared in SARS custody in 2004.

Also, a school proprietor, Emma Adimachukwu, narrated how the disbanded SARS under Mr Nwafor charged him N400,000 to feed his son in their custody.

Mr Adimachukwu, said his son, Obinna Sandy, a businessman, was killed in 2014.

He said, “My son graduated from the Nnamdi Azikiwe University; because he read business administration, I opened a shop for him at Mount Olive shopping plaza, Onitsha.

“He travelled to India to buy clothes. On March 14, 2014, he went to Nnewi and collected $10,000 owed him by a friend and proceeded to Onitsha to take delivery of his goods that just arrived.

It was while waiting for the goods that some SARS men arrived and started shooting. They arrested him and his friend. They searched him and saw $10,000 on him and concluded he was an armed robber.

“My son refused to let them take the money, he fought them. So, when they got to Awkuzu SARS, they killed him.

“When I went to see him after his friend who was smuggled out told me of it, James Nwafor (SARS boss) told his men to lock me up that I was a father to an armed robber. Some prominent people intervened and they released me. They later told me to drop money so they can be feeding my son, and they collected N400,000 from me, knowing full well that they had killed my son,” Mr Adimachukwu told the panel.

While Mr Nwafor is yet to appear before the panel to respond to any of the allegations levelled against him, calls put across to a telephone number known to be his did not go through as the line was switched off throughout Friday.

Meanwhile, speaking with our reporter, the national spokesperson of the Nigerian Police Force, Frank Mba, refused to comment on Mr Nwafor’s case, urging aggrieved parties to take advantage of the panels instituted across the state.

“Anyone who has anything against the defunct SARS or SARS Awkuzu, should take the advantage of judicial panel across the country.”

He, however, declined comments on whether or not the force received multiple complaints on the conduct of Mr Nwafor before now.

In his response, Mr Mba restated that he does not want to comment on any matter before the panel or a potential one.

“This will amount to sub-judice and I don’t want to be sued for contempt,” he said on Friday evening.