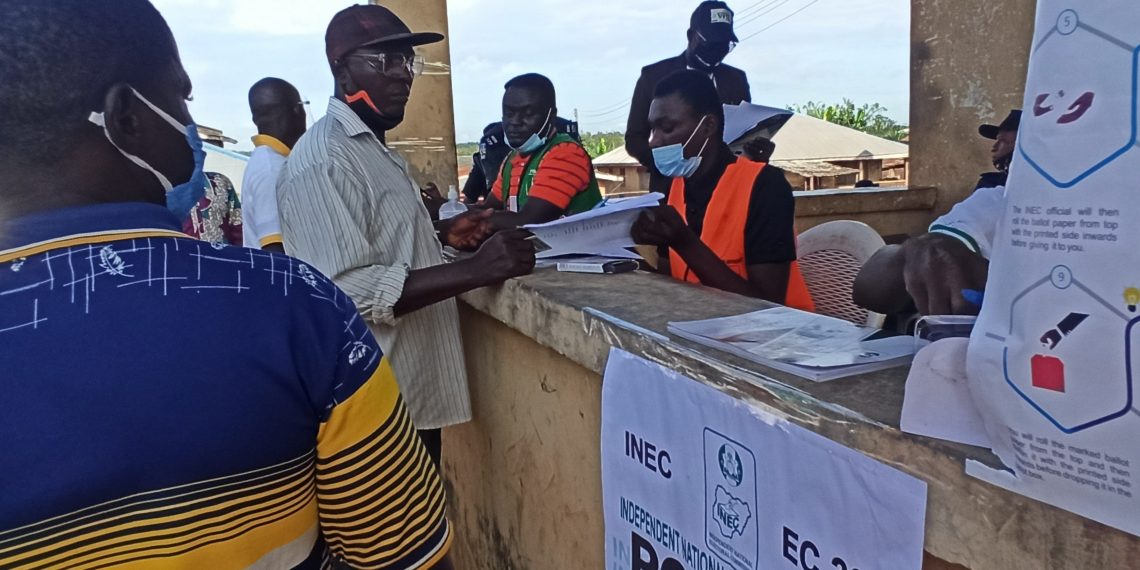 A Polling Zone in southwest Nigeria used to illustrate the story

Some of the officers who participated in the October 10 election, say that they are yet to be paid

Five weeks after they participated in the gubernatorial election in Ondo state, some police officers who were deployed for the election are yet to be paid their allowances.

The gubernatorial election was held in Ondo State on Saturday, October 10.

But some of the police officers who participated in the election said that hundreds of their colleagues are yet to be paid.

PREMIUM TIMES had earlier reported that some of the police officers had raised alarm over the non-payment of their allowances.

Some of those who spoke said that they were promised that they would be paid before the deployment but were surprised that up till now they have not been paid.

PREMIUM TIMES learnt that a number of police officers from Oyo State and other states in the South West region were deployed for the election.

But the police officers said that all efforts to secure their allowances have been meeting brick walls.

Some of those affected from Oyo State command have appealed to the Inspector General of Police, Mohammed Adamu.

Officers who spoke with PREMIUM TIMES in Ibadan said that over 300 police officers who were deployed to Ese-Odo local government area of Ondo State were affected.

They said that all of them who are from Oyo State Command are yet to receive their allowances.

Those who spoke said that they used their personal funds throughout the election expecting that they would be refunded.

One of them said “We were deployed to Ondo State, Ese-Odo local government area; 300 of us from Oyo State. But we are yet to see our alert.”

“We are calling on the police authority to pay our allowances and let it not be promise and fail as usual.”

One of the affected police officers told PREMIUM TIMES on Tuesday in Ibadan that he is appealing to President Muhamadu Buhari to prevail on the police budget office to pay the affected officers without delay.

The police officer, an inspector, who said that he needed the money to settle medical bills and attend to medical needs, blamed the budget office of the police headquarters for the delay.

He then appealed to President Muhammadu Buhari to intervene.

The inspector who came to Nigeria Union of Journalists (NUJ) secretariat in Ibadan to speak with PREMIUM TIMES said, “You know we have two batches. But, some of us from Oyo State in the second batch have not been paid. The first batch went to Owo and they have been paid.”

He acknowledged that after the initial report was published, the police authority sent a signal to them but nothing has been done since then.

“But, those of us in the second batch have not been paid. We are more than 200. After the report came out, they sent a signal to us. They claimed that some people have problem with their bank details, but what about some of us that does not have issues? Some people at the top are sitting on our money.

“After the report was published, they sent a signal to us. They claimed that some people have issues with their account details. But, I don’t have a problem. Let them pay us.

“The IG is aware of this problem because the signal sent to us is from the IG’s office. But, we want the President Muhammadu Buhari to intervene. The problem may be from the Ministry of Finance and police budget office, because we believe that the money must have been released but some people are sitting on it.

“We went there on Monday and came back on Sunday. We fended for ourselves, got hotel accommodation by ourselves. They first took us to Isua, then later to Ese -Odo.

“And I need this money to settle my medical bills. I have to take care of myself in the hospital.”

The police officer, while speaking, disclosed that two of the police officers who supervised the election while coming from Ondo State on Monday, October 12, were among the victims of an explosion along Ilesa-Akure road.

PREMIUM TIMES learnt that an accident occurred at Igbelajewa Village, along the Ilesha-Akure Expressway on that day.

Our correspondent recalls that some persons died in a road accident involving a fuel tanker in Osun State.

Residents told PREMIUM TIMES that many people were burnt in the fire.

This newspaper gathered that the truck driver lost control of the vehicle, which fell over and caught fire.

About five vehicles, including an 18-passenger commercial bus, were burnt in the accident.

The police inspector, who spoke in confidence with PREMIUM TIMES on Tuesday said that one of the officers, ASP Simiat died in the tanker explosion.

He said that the second person is still at the University College Hospital (UCH) responding to treatment.

“Two of the officers were caught in the explosion in Osun State, along Ilesa-Akure road. Two of them were affected. They left Ondo State on Monday. One of them, Simiat has died, burnt beyond recognition. The second person is still at UCH. They are looking for money for treatment now. He is still at UCH.”

‘We have paid 90 per cent of officers’

The force’s public relations officer, Frank Mba, when contacted, said that the police officers who are yet to be paid are those who have issues relating to discrepancies in account details.

He, however, told PREMIUM TIMES that 90 per cent of those who supervised the election have been paid their allowances.

Mr Mba in a telephone interview with PREMIUM TIMES on Tuesday said, “Over 10,000 police officers were deployed for that election. If all of them have received and it remains some 200, you know that there must be a fundamental problem with those ones who have not been paid.

“What I am saying, in essence, is that over 90 per cent of those who participated in that election have been paid. People that have not been paid are those who probably have issues with their account numbers or some errors.

“You were in the general elections, the people were paid, the same thing with Kogi, Edo elections. We will ensure that all our personnel are paid to the last kobo.”

These were some of the demands of protesters calling for the abolition of Special Anti-Robbery Squad (SARS).

The protesters under the auspices of #EndSARS are demanding better welfare for police officers across the country.

Man to die by hanging for killing lover