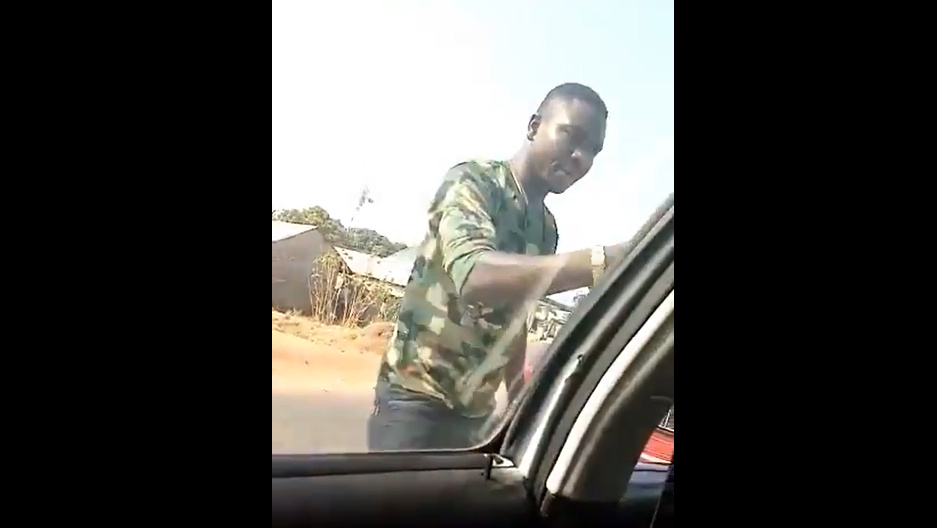 A Nigerian soldier who assaulted a driver for overtaking him on the road.

A few days ago, a soldier in Ibadan, Nigeria’s South-West, was caught on camera flogging one woman in public.

An unidentified Nigerian soldier has been caught on camera assaulting a driver for overtaking his car on the Abuja-Kaduna road, North-central Nigeria.

The incident, which happened on November 10, was captured in a video posted on Twitter by a sports journalist, Dare Kuti.

Mr Kuti told PREMIUM TIMES he witnessed the incident and that his colleague was being driven by the victim from Abuja to Kaduna when the incident happened.

“Oga abeg, wetin I do you?” the driver, apparently frightened, is heard in the video speaking in Pidgin to the approaching soldier.

The soldier forcefully opened the car door, stretched his right leg into the car and continually hit the driver. The victim could be heard screaming in pain.

The soldier jumped inside the front seat of the car and kept punching the man who appeared too frightened to fight back.

The soldier kicked him again and then shouted, “God punish you! I will kill you and nothing will happen. You are an idiot!”

Some sympathisers are seen in the video begging the soldier to have mercy on the man, while others tried to help the victim up from the ground.

The soldier entered his maroon colour Honda car and drove away after the incident, the video showed.

PREMIUM TIMES on Thursday spoke with the driver who identified himself as Dauda Mustapha.

Mr Mustapha, a commercial driver who plies the Abuja-Kaduna route, said he overtook the soldier, after the latter drove roughly from a filling station into the road.

He threatened d guy life & promised to deal with him.

In his words: "I will kill you and nothing will happen"

He said when they got to an unmotorable spot on the road, the soldier used his car to block his and then came down to assault him.

“My car no even touch him car! Him say why me I overtake-am,” Mr Mustapha said.

Mr Mustapha said the soldier beat him with a timing belt and also broke his car’s windscreen.

“I talk-am for my mind say till I die I no go forgive-am. I no know wetin I do-am. I get wound for my body. As I dey talk with you, headache dey wori me,” the driver said.

A spokesperson for the Nigerian army, Sagir Musa, did not respond to calls and a text message asking for his comment.

“The government took some steps to investigate alleged abuses but there were few public reports of prosecutions of officials who committed violations, whether in the security forces or elsewhere in the government,” the U.S. Department of State said in a 2019 report on the human rights situation in Nigeria.

“Impunity remained widespread at all levels of government. No charges were filed in some of the significant allegations of human rights violations by security forces and cases of police or military extortion or other abuse of power,” the report said.

A few days ago, some soldiers in Ibadan, Nigeria’s South-west, were caught on camera flogging one woman in public whom they accused of “indecent dressing”.

Young people across various states in Nigeria recently protested for days against police brutality in the country.

“This is barbaric. I feel totally disgusted watching this. Scenes like these just fuels so much anger and hatred towards the establishment,” one Twitter user, Isidore Akpaetuk (@IsidoreAkpaetuk), commented on the video showing the soldier assaulting the driver, Mr Mustapha.