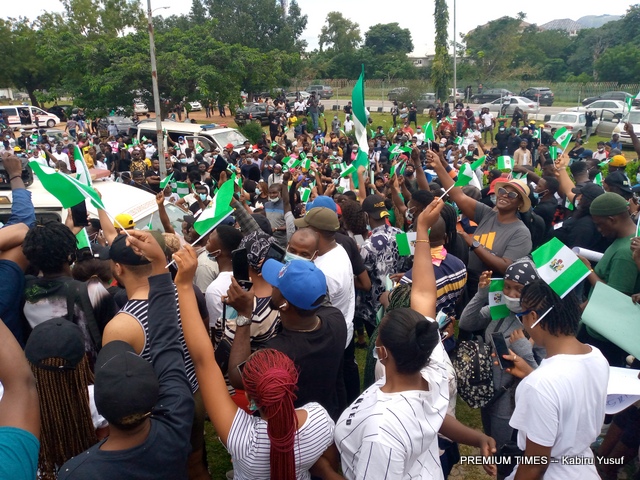 Like a military junta, Buhari govt goes after #EndSARS protesters

The government's clampdown on the protesters involves freezing of their bank accounts, confiscation of their travel documents, and gestapo-like arrests.

The Nigerian government is currently deploying different strategies to punish those who played key roles in the nationwide protests against police brutality and poor governance in the country.

The new development, which involves freezing of bank accounts, confiscation of travel documents, and gestapo-like arrests, has been likened by many Nigerians to what happened when the current president, Muhammadu Buhari, was the military head of state between 1984 and 1985.

The move is also contrary to the administration’s endorsement of dialogue as the best approach to addressing the protesters’ call for justice and good governance. The government echoed this choice when the protests peaked and spiraled across many states.

The government had promised to constructively engage the protesters in dialogue towards finding lasting solutions to some of the issues they raised.

Apart from Mr. Buhari who addressed Nigerians in a national broadcast, his vice, Yemi Osinbajo, addressed a letter publicly to the youth, aside from various other appeal messages he shared via his social media platforms including Twitter.

For instance, on October 16, about one week after the protest broke out, Mr. Osinbajo wrote a long piece on his Twitter handle @ProfOsinbajo where he said the government took responsibility for the excesses of SARS operatives whom he described as errant officers. He also listed efforts to compensate the victims of the abuses nationwide, and the decision to set up judicial panels of inquiry.

However, while the demands of the protesters are yet to be fully addressed, key figures in the peaceful protests are being targeted for punishment by the government.

The Central Bank of Nigeria (CBN) has secured a court order to freeze the bank accounts of 20 young Nigerians reportedly over their involvement in the protests.

The CBN, which has since passed down the order to six financial institutions, directed the banks “to freeze forthwith all transactions on the 20 accounts on the list annexed to the CBN’s application as Exhibit A and all other bank accounts of the defendants and respondents for a period of 180 days pending the outcome of investigation and inquiry currently being conducted by the Central Bank of Nigeria.”

On November 1, the Nigeria Immigration Service (NIS) confiscated the international passport of Modupe Odele, a lawyer who offered free legal service to some protesters arrested by the police.

The NIS seized her passport at the Murtala Muhammed International Airport in Lagos while she was on her way to Dubai en route the Maldives, an Island nation in South Asia.

Without explanation, and for more than a week, the agency withheld the young lawyer’s travel document, denying her the freedom of movement.

But NIS has told PREMIUM TIMES that its action was based on a signal received from an unnamed security agency of the government.

In a telephone interview with PREMIUM TIMES on Sunday, NIS comptroller general, Muhammad Babandede, said the investigation was already concluded, and that the lawyer could pick her passport on Monday.

On November 6, four young men and a female citizen journalist who had taken part in a protest at the National Assembly vicinity in Abuja were arrested.

The magistrate, who rejected an oral application for bail by the defence counsel, Tope Akiyode, remanded them in Suleja custodial centre.

Mr Akiyode, who appeared in court alongside two other lawyers, Odudu Ituen and Sowore Olasehinde, describe the development as anti-democratic and obnoxious.

Earlier on Thursday, two young men who were said to have managed a WhatsApp platform for the coordination of the protest in Osun State, Babawale Popoola and Fisayo Aderemi, were arrested and detained.

The police said they were detained for allegedly playing roles in the arson that followed the protests in the state. As of Sunday, they were yet to be arraigned.

In a similar manner, on Saturday, a key participant in the protest in Lagos, Eromosele Adene, was traced to his home in Ikeja and whisked away to the state criminal investigations and intelligence department (CIID), Panti, Yaba.

Mr. Adene, an artist, who was conspicuous at the barricade at the government secretariat in Alausa, Ikeja, was also part of the planning for a peaceful protest scheduled to hold in Lagos on Saturday. He provided his contact on the leaflets that announced the programme alongside that of a central committee member of Revolution Now Movement, Sanyaolu Juwon.

On Sunday, one of the lawyers who visited Mr Adene at the CIID, Ayo Ademiluyi, told PREMIUM TIMES on the phone that the victim had been taken to the state command of the police in Ikeja.

Mr Ademiluyi, who is the secretary to the Radical Agenda Movement in the NBA (RAMINBA), said Mr Adene’s personal lawyer, Tunde Jinadu, had accompanied his client to the state command.

The lawyer said he was not sure whether Mr Adene would be arraigned on Monday.

The police public relations officer (PPRO) at the force headquarters in Abuja, Frank Mba, neither picked calls to his mobile phone nor responded to short messages sent to him. But his counterpart at the Lagos police command, Muyiwa Adejobi, told our reporter that he was in a security meeting when he was called.

He promised to reply to this newspaper’s inquiry on the arrest of Mr Adene and the general clampdown on the protesters. However, his response was not received by our reporter as of the time of filing this report.

In Osun State, the police spokesperson Yemisi Opalola, who confirmed the arrest of Messrs Babawale and Aderemi could, not give the specific date when they would be arraigned in court.

Meanwhile, all the government spokespersons asked for their reactions to the development neither picked their call nor replied to messages sent to them.

Our reporter made efforts to get the reactions of the Minister of Information and Culture, Lai Muhammed; both the special adviser and the senior special assistant on media and publicity to President Muhammadu Buhari, Femi Adesina and Garba Shehu respectively, but they did not pick calls made to their lines or reply t the short messages sent to them.

The immigration boss, Mr Babandede, said his agency seized Mrs Odele’s passport based on a signal received from security operatives.

He said; “We represent all the law enforcement agencies in Nigeria at the border posts. So if there are issues concerning anyone, we are always asked to observe, check and report to the appropriate authorities. In fact, we do many things at the borders which are not known to many Nigerians. Some of them border on national security which we don’t need to disclose to Nigerians.

“So it was one of those issues that necessitated that we should take her passport. We have checked and we are able to finish. Now she can travel. She wanted to come but we said she could even send her lawyer, so that she can travel.”

Reacting to the question on how much the victim would have lost in terms of her missed flight and engagements, Mr Babandede said it would be difficult to make any claim concerning that, since it was a matter of national security.

“The truth is that we don’t explain issues of national security. Even in court, we only explain to the judge without giving details. Let’s say, for instance, there is a roadblock, and security operatives stopped you to conduct searches on you, if you missed an engagement, it doesn’t mean that you can make claims,” he said.

The official added that when national security is involved, human rights are limited. “She was neither harassed nor detained, we only conducted an investigation, and we are through with that,” he said.

A pro-democracy activist and lawyer, Femi Aborisade, said by its conduct, the Nigerian government is criminalising peaceful protests. He therefore urged all lovers of democracy to rise in the defence of democratic principles such as freedom of movement, freedom to assemble, among other inalienable rights.

Speaking on the phone with our reporter, Mr Aborisade said the development is condemnable and unacceptable.

“Under section 40 of Nigeria’s constitution, Nigerians have the fundamental rights to gather peacefully and protest peacefully. Even top officials of the government regime have attested to the fact that #EndSARS protest was absolutely peaceful. To now be picking the leaders of the protest by security operatives amount to criminalising the right to peaceful protest.

“Nigerians are not conquered people; we are not slaves. We have constitutionally guaranteed rights, and we will refuse to be reduced to the status of slaves.”

He advised the promoters of the protest to join hands with other relevant individuals and organisations to fight the clampdown on the people.

Mr Aborisade also called on the labour unions to wake from their slumber to protect the rights to peaceful protest, saying keeping quiet could be dangerous.

He also urged the affected individuals to seek legal interventions in vacating the order freezing their accounts and to secure their freedom from detention.

On his part, Mr Akiyode, who decried what he described as the crude style of the government to crush the protesters, said he would be in court on Monday to file a written application for the bail of his client.

He also said one of those whose bank accounts was frozen has reached out to him to secure an order to lift the embargo placed on his account.

“We will ensure that justice is served. It is a way of intimidating us but I want to believe that we are more resolute than the crude approach being deployed by the Nigerian government,” Mr Akiyode told our reporter on the phone.

Meanwhile, the secretary of Bwari branch of the Nigerian Bar Association (NBA), Abuja, ‘Lekan Oladapo, has said his branch would approach the court to challenge the actions against the detained Abuja protesters.

According to Mr Oladapo, the branch is prepared to offer free legal services to any of the protesters whose rights are being violated by the Nigerian government.

“We will intervene in this matter. There is no justification to seize a Nigerian passport for no reason given, and for the random arrests of innocent Nigerians. We all are victims until those suffering illegally are rescued,” he said.