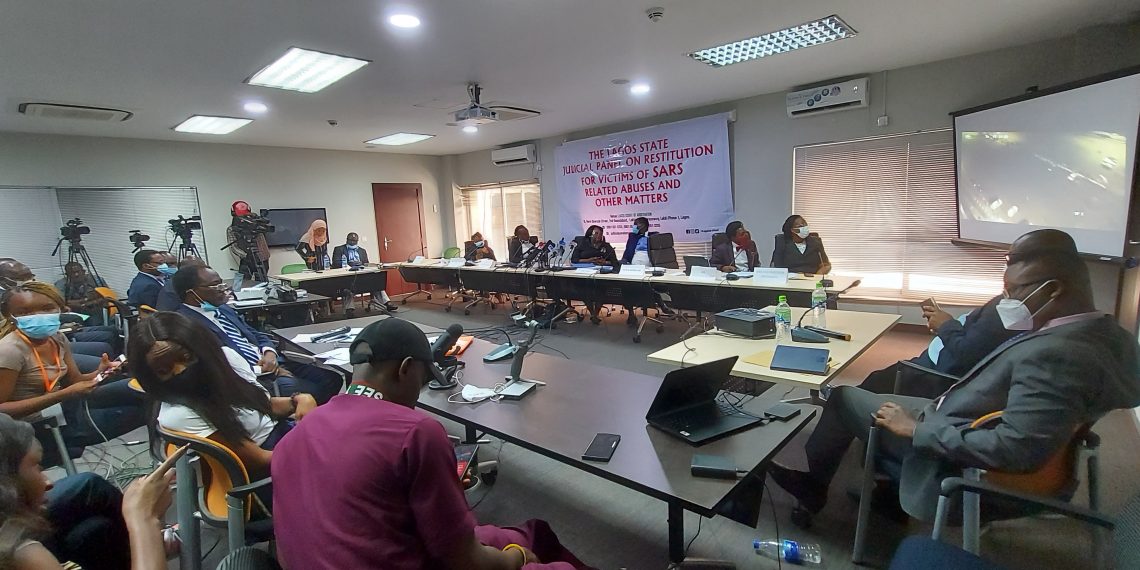 The Lagos Judicial Panel of Inquiry, a panel set up by the Lagos state government to investigate cases of police brutality, other rights abuses and the Lekki shooting incident, on Friday, commenced the viewing of the CCTV footage presented by the Lekki Concession Company (LCC).

The footage, which is more than 22 hours, began playing at the panel at 11:36 am on Friday.

Doris Okuwobi, a retired judge who heads the judiciary panel, marked the footage as Exhibit D and asked the legal counsel what should be done to the footage.

Responding to the retired judge, Rotimi Seriki, the legal counsel of the LCC, the company in charge of the Lekki Toll gate, applied that the footage be played so that relevant questions can be asked.

Abiodun Owonikoko, a Senior Advocate of Nigeria (SAN), representing the Lagos State government, urged the panel to skip the lengthy footage to the part where the shooting incident occurred.

“The footage contains several hours and there is a particular portion of the footage from where uniformed men arrived at the plaza to where the footage stopped,” Mr Seriki said.

Mr Owonikoko added that for time constraints, the footage which is over 22 hours, should be played from the time the Lekki incident occurred.

Meanwhile, Adesina Ogunlana, a lawyer who represented the #EndSARS protesters at the hearing, kicked against the application that some parts of the footage be skipped.

Mr Ogunlana argued that every content of the footage be viewed at the panel.

Mrs Okuwobi said the footage will be taken as a whole and not taken in bits.

“The entire content of the footage shall be viewed in this proceeding,” she said.

The footage, which has been playing for over an hour left the panel sitting in silence, as some attendees dozed off.

Earlier at the proceeding, Mr Owonikoko said the counsel- Mr Ogunlana- cannot represent #EndSARS protesters, a body that is not known in law, no leader no structure.

“The panel needs to guide all of us on who can represent who.

“For Endsars protesters is a nebulous entity with due respect. But we have individuals who subscribe to #EndSARS, they can stand up and be represented,” he said.

Mr Seriki, who also alligned with the position of Mr Owonikoko, said a counsel can only represent an entity known to law, whether an individual or entity.

He said the cross-examination of the Managing Director of LCC cannot be done by every “Tom, Dick and Harry.”

“It is not open to the world at large to cross-examine the witness. The witness is there for a specific purpose

“We cannot allow every Tom, Dick and Harry to cross examine the witness,” he said.

Reacting to his opposition by the state and LCC counsels, Mr Ogunlana said they were not in a position to declare his clients as leaderless.

Mr Ogunlana said the panel was set up for fact-finding and the lawyers have no right to tell the court who to admit and who not to admit.

The lawyer called out some #EndSARS protesters, who were present at the panel; namely, Victoria Oniru, Dabira Ayukeu and Perpetual Kamson.

“I am not representing spirits or ghosts, these are part of the people who are running underground, threatened by forces of the state and they know it,” he said.

Both Messrs Owonikoko and Seriki withdrew their objection against Mr Ogunlana.

“I’m now guided, I see human beings; these are decent people. That is all we want to achieve, we now know the faces behind the names but they deserve all the protection. I withdraw my objection now, having identified the persons,” Mr Owonikoko said.

Mrs Okuwobi noted that the objection taken to the appearance of Mr Ogunlana for #EndSARS protesters now withdrawn.

The viewing of the CCTV footage of the Lekki incident continued at the panel.