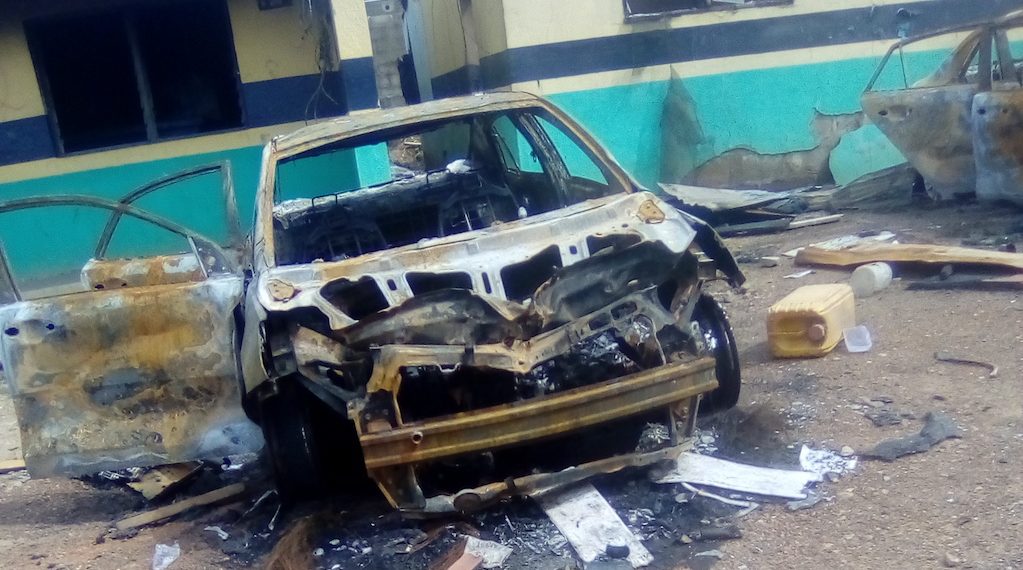 After news that hoodlums, who took advantage of the #EndSARS protests across the country, embarked on looting and arson targeted at businesses and police facilities, residents of Ogungbade, in Egbeda Local Government Area of Oyo State gathered some people to keep watch at the only police station in the area.

Faced with incessant armed robberies and sundry crimes, inhabitants of the communities had contributed N5 million to build the police station.

The residents kept watch at the police station until midnight on Thursday, October 22, before retiring to their homes. But they left too early.

A few hours after they left, hoodlums set the police station alight.

The #EndSARS protest was aimed at compelling the government to disband the Special Anti-Robbery Squad (SARS), a tactical unit of the police whose personnel have been accused of torture, extortions and extrajudicial killings.

The protest turned violent and degenerated into looting and arson on October 20 after security officials and soldiers shot into a crowd of protesters in Lekki and other parts of Lagos.

The burning of the divisional police station in Egbeda was not a singular act.

Across the state, between October 20 and October 23, no fewer than seven police stations and other facilities owned by the police was were torched by arsonists, a PREMIUM TIMES investigation into the cost of the rioting has revealed.

Six of the seven stations were burnt in the state capital, Ibadan while one of the stations is in Iseyin, in Oke-Ogun area of the state. The Akobo police station in Ibadan was the only station of the seven that was partly burned.

In all of the seven stations vandalised by the raging mobs, items such as generators, electronic gadgets, office equipment, guns and ammunition were either stolen or razed to ashes.

More than 40 vehicles including patrol vans and automobiles impounded by the police were burnt and vandalised by the hoodlums.

The Ojoo and Iseyin police stations were burnt after clashes between irate youth and the police. The stations in Egbeda, Ogungbade, Adelubi and Alabebe were razed after policemen allegedly killed a motorcyclist around the Iwo Road area of Ibadan.

At Ojoo, policemen deserted their station as the mob attacked. The police were yet to return to the station at the time of this report.

“They had run away for their lives. We have not seen any one of them since the incident,” a trader in the area told this reporter.

Residents said the Ogungbade police station was built about five years ago from donations made by members of the community.

A trader who lived close to the station said that residents woke up on Friday and were shocked to see the station burning.

“We came on Friday and discovered that the police station has been burnt. The hoodlums set the station ablaze and made attempt to rob some residents but, they were repelled by some local hunters and landlord, so when they could not perform the operation, they went back to set the remaining part of the station ablaze,” he said.

The Egbeda Divisional Police Headquarters is located at new Gbagi market along the Old Ife-Ibadan Expressway.

All the buildings inside the station were completely razed. Traders at the market said trouble started after a rumour emerged that policemen had shot and killed a motorcyclist at Iwo Road on Thursday.

Three vehicles two cars and one patrol van inside the police station were burnt.

Similarly, Adelubi police station was set ablaze Thursday afternoon. According to the residents, the hoodlums invaded the police station when the rumour of the killing of a commercial motorcyclist by policemen reached the area.

Some ammunition were believed to have been stolen during the attack on the station.

The charred remains of the six vehicles were in the station when this reporter visited.

At Alabebe police station, 13 vehicles inside the premises of the station were burnt alongside the buildings in the compound.

The hoodlums made several attempts to burn the Akobo police station located along the Akobo- Bashorun- Idi-Ape Road in Ibadan on Thursday and Friday but, could only set ablaze a portion of the police station.

Residents of Akobo told PREMIUM TIMES that police officers at the station repelled the hoodlums from setting the station ablaze on Thursday and Friday.

The police station was burnt during a confrontation between the protesters and the police officers at the station.

It is the only police station that was burnt outside Ibadan, the state capital.

Meanwhile, the state police commissioner, Joe Enwonwu, said six policemen were killed during the attacks on the police stations.

He spoke during a press conference on Wednesday, October 28, 2020.

Mr Enwonwu said “Consequent upon this, six police officers were gruesomely murdered, five divisional police headquarters, police patrol vehicles were burnt down and exhibits looted in the exhibits room with many police arms and ammunition carted away due to activities of criminal elements who capitalized on the protest to perpetuate their heinous crimes.”

The Oyo State Police command has said that it has arrested nine persons in connection with the burning of police stations in the state.

All the nine suspects were arrested in connection with the attempted burning of the Iseyin police station.

Mr Enwonwu said generators, wall clock and some motorcycles allegedly looted from police station were retrieved from the suspects.

Meanwhile, some residents of Oyo have raised concerns over the implications of the attacks on police facilities in the state.

Oludayo Tade, a criminologist at the University of Ibadan, said the burning of the stations has serious financial implications for the police and the public.

“Burnt police stations are major losses to both the police and the state. It has financial and security implications. This is because some of the burnt stations may have been built by communities, individuals or organisations to enhance security in a locality. And with burnt stations, they will still have to pay for the arson if they need police around them. This is because the Nigerian Police is grossly underfunded and may not allocate funds for such at this critical period when so many things are begging for attention in the police.”

Also, a public affairs analyst, Bayo Busari, said if those who attacked the police stations are not apprehended, it may embolden people to take laws into their hands.

Mr Busari who lectures at the Lead City University in Ibadan, said police weapons are in the wrong hands, the situation would heighten the level of insecurity in the country.

“The implication is that if those responsible for the condemnable act of arson are not apprehended and made to pay for their crime, it’s going to embolden people to take the laws into their own hands at the slightest, or no provocation in the future.

“Not only this, police weapons in the wrong hands will heighten the level of insecurity in the land. The cost of rebuilding those burnt stations will also put a strain on the lean purse of government in the face of the financial crisis that has been occasioned by the COVID-19 pandemic.”

A sociologist, Olalekan Babalola, who described the situation as worrisome, said the government is to blame for the attacks.

“Burning police station is a calamity for every society because it serves as an indication that such society is experiencing a breakdown of law and order,” he said.