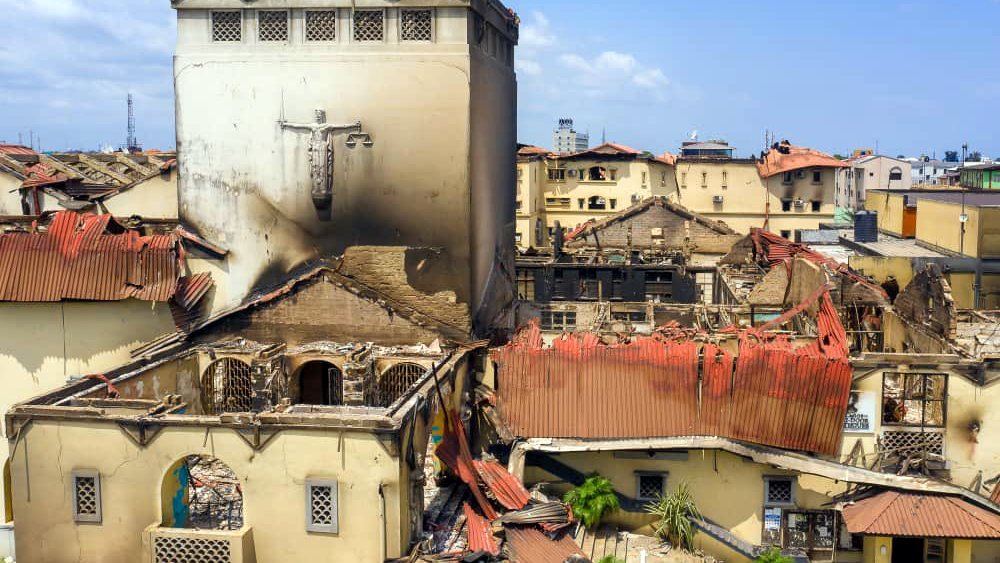 The oldest court in Nigeria, the Federal High Court at Igbosere, Lagos.

How hoodlums took advantage of #EndSARS, wreaked havoc in Lagos

Hoodlums took advantage of the #EndSARS protest to wreak havoc in Lagos.

Lagos, Nigeria’s economic hub, has been left devastated by the activities of hoodlums in the last few days.

The city was ravaged by hoodlums in the days after the #EndSARS protest, leaving many parts of the state with the burnt buildings, looted shops and destroyed properties.

The hoodlums, who carried out attacks in different parts of the state, in the days following the #EndSARS protests, seemed undisturbed by security agents, as they carried out arson, destruction of properties, and looting of valuables in the state.

Within 48 hours, Tuesday and Wednesday, no fewer than 27 buildings, including police stations, media houses, government secretariats, and the court were attacked and left in ruins.

While taking record of the properties destroyed by the arsonists, Babajide Sanwo-Olu, the Lagos State governor, said the level of destruction in the state is akin to a war zone. He said the state must recover from the destruction that has overwhelmed him.

In what seemed to be a coordinated attack, hoodlums in Lagos State started their activities by attacking peaceful #EndSARS protesters.

The armed hoodlums attacked protesters on two occasions at Ikeja and were alleged to have been sponsored by the state to discredit the #EndSARS protests. The state denied all allegations.

For about two weeks, Nigerian youths had taken to the streets to protest against police brutality, extrajudicial killing and extortion, and called for a reform of the Nigerian Police.

The hoodlums, who continued their activities unchecked, began organising mob actions against the police, destroying police stations and started attacking businesses in the state.

On Tuesday, about six police formations in Lagos were attacked by armed hoodlums. They looted and destroyed police properties and also burnt down some police stations in the state.

The Iganmu police Division was the first to come under attack on Tuesday, as hoodlums set the station on fire after police officers allegedly shot two people in the neighbourhood.

The violence, however, extended to other parts of the state, as police and hoodlums clashed at Mushin, and another police station was burnt at Ojo local government.

In a bid to check the activities of criminal elements in the state, Mr Sanwo-Olu declared a 24-hour curfew effective 4 p.m. on Tuesday.

However, the situation in the state became worse when armed officers opened fire on peaceful protesters at Lekki toll gate on Tuesday night. This led to the death of at least two people, while many were injured.

The Lekki toll gate was razed down by the angry protesters after the shooting.

Following the Tuesday shooting, hoodlums in Lagos took to the streets on Wednesday morning and committed arson on many state and private-owned facilities.

Despite the presence of security agents and imposition of curfew in the state, the hoodlums carried out their actions unchecked. Many buildings were burnt, with properties destroyed and looted.

Their nefarious activities continued till Thursday morning as the criminals kept on finding weak points to attack.

The Lagos police spokesperson, Olumuyiwa Adejobi, said about 17 police stations were burnt by hoodlums in the state.

Properties found within the premises of the police stations, including vehicles, were also destroyed, while valuables, including weapons, were carted away by the criminal elements.

The oldest court in Nigeria, the Federal High Court at Igbosere, Lagos was razed down by hoodlums on Wednesday. Many case files were burnt in the fire, while others were carted away.

Valuables, including desktop computers, air conditioners, refrigerators, chairs and others were also carted away by the hoodlums.

3. Attack on the Palace of Oba of Lagos

The family house of the Lagos State governor, located at Omididun Street, Lagos Island, was also burnt on Wednesday by the hoodlums.

The headquarters of Television Continental (TVC) was also burnt to the ground in Lagos, while the office of The Nation newspaper was torched by the hoodlums.

The Ajeromi-Ifeolodun local government council building was also burnt during the Wednesday attacks. More than 20 cars within the LGA premises were burnt in the incident.

The office of the Nigerian Ports Authority (NPA) in Lagos was also set ablaze by hoodlums on Wednesday. The dockyard at Apapa was attacked, valuable items were stolen by the hoodlums, and vehicles and other properties set ablaze.

The Lagos State Theatre at Oregun was not left out in the attacks by hoodlums on Wednesday.

Popular malls and supermarkets in Lagos were also vandalised and looted by the hoodlums in operations which lasted till Thursday. Several shops were also broken into in many areas and goods carted away by the hoodlums.

Looting Spree: Why I stored Constituency Project items in my house – Senator