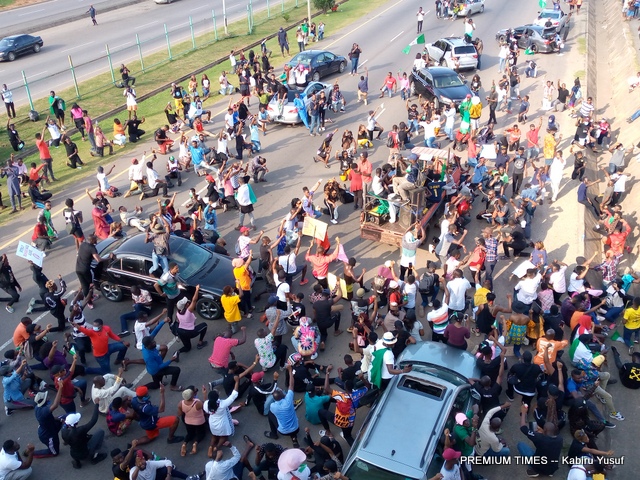 Demonstrators came under attack at about noon Monday as they marched through the streets of Abuja.

Police have fired tear gas at #EndSARS protesters in Abuja.

The protest, which began nearly two weeks ago, seeks an end to police brutality in the country.

At least 12 people have been killed across the country and police authorities last week warned against the use of force against protesters.

A PREMIUM TIMES reporter said demonstrators came under attack at about noon Monday as they marched through the streets of Abuja.

A video showed protesters running from a plume of gas fumes shot to disperse the gathering which started from Nyanya before the incident at Asokoro, near Anambra State Liason office.

The protest took a rather rowdy dimension after the confrontation with the police officers. The protesters took to the busy street leading to AYA roundabout, throwing iron waste bins and other metal objects on the road to stop police vehicles from catching up with them.

This lasted for about 30 minutes until the protesters regrouped and took another direction to surpass the police team.

The hoodlums came in great numbers, brandishing sticks, knives and other weapons. The #EndSARS protesters, the primary target, later fled the scene.