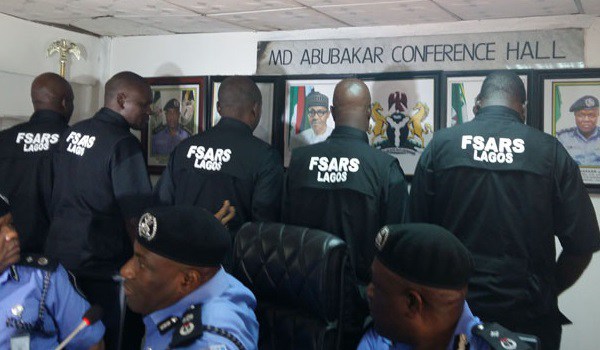 FSARS used to illustrate the story

The SARS, a police unit, has been accused of extortion, intimidation, and murder of many young Nigerians.

The Inspector-General of Police, Mohammed Adamu, has announced the dissolution of the dreaded police formation, Special Anti Robbery Squad (SARS or FSARS).

The dissolution is coming on the hills of the #EndSARS protest nationwide.

The IGP made the announcement on Sunday afternoon during a press conference at the force headquarters in Abuja.

The IGP reports directly to the president and could only have taken such decision with President Muhammadu Buhari’s approval or authorisation.

The SARS, a police unit, has been accused of extortion, intimidation, harassment and murder of many young Nigerians.

PREMIUM TIMES has reported on the protests during which at least one protester has been killed.

The slain protesters, Jimoh Isiaka, was among the scores of protesters in Ogbomoso. the Oyo State capital, on Saturday.

They marched peacefully to a police building in the city before the police fired teargas and live bullets to disperse them, witnesses told PREMIUM TIMES. Mr Isiaka was hit by a stray bullet.

The police have, however, denied firing live bullets, saying its officials only used teargas to disperse the protesters.

The police have also violently dispersed the protest in many other Nigerian cities.

PREMIUM TIMES reported how the police violently dispersed protesters in Abuja on Saturday and Sunday.

The protesters gathered in front of the police headquarters in Abuja on Saturday evening, demanding to be addressed by the police chief, Mr Adamu.

Instead, the police fired tear gas to disperse them, injuring some of the protesters.

On Sunday, the Abuja protesters gathered at the Unity Fountain from where they marched towards the Three-Arms zone before they were again violently dispersed by the police. Many of them, including a PREMIUM TIMES reporter covering the protest, were injured.

More details on the police chief’s announcement disbanding the SARS will be provided in subsequent updates.

#EndSARS: Minister speaks to mother of protester killed in Ogbomoso