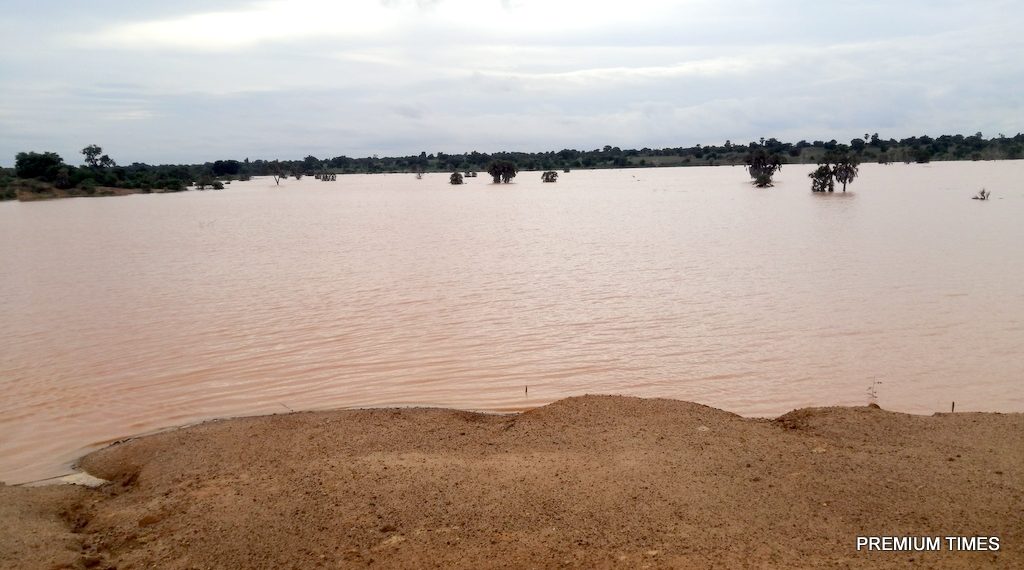 The rehabilitation of the Raba dam was abandoned, despite the allocation of N90 million, after the death of the senator who nominated it as his constituency project.

The Raba dam was supposed to be a source of blessing to farming communities that sprawl around it. The water collected in the dam was meant to irrigate the farms, supplying crops with needed nutrients to thrive.

The dam is also supposed to be a source of potable water to the inhabitants of the largely arid communities.

But in an unfortunate twist of fate, the dam is now a source of misery and in fact, a tragedy to the inhabitants of the villages that straddle it. The dam is now filled with dirt and the water in it emits a foul smell.

Years of relentless erosion of the earth around its edges also threatens to wash away its concrete wall. Instead of collecting the needed water to irrigate the farmlands of the residents of the villages around it, it is now the main cause of flooding, washing away crops just before harvest.

“We have been living here, struggling for survival in this village, and we have not been seeing support from people, even, from the local government council in the main town,” said Mahadi Sagir, an inhabitant of nearby Dan’aunai, a farming community.

Residents of the communities around the dam told PREMIUM TIMES that after the persistent loss of their harvest due to the repeated flooding of the area during the rainy season, farmers are beginning to relocate.

The community leader of Dan’aunai also says the abandoned dam poses an existential risk to the inhabitant of the area. They said in 2019, one person drowned in the flood that swept away several farmlands and houses in a section of the village.

“It was very painful to every member of this village last year when we lost a boy as a result of the unusual flood, so sad we lost him, no compensation was gotten from anybody. The only compensation that we are looking forward to seeing is that the government should come and revisit the project,” said Aliyu Nura, representative of farmers association of Dan’aunai.

The head of the community, Abubakar Raba, said he has reached out to the local government for help but no assistance has been received.

“I have written many letters to the caretaker (leaders) of Dusti local government, and they kept promising to work on those letters. The dam is mainly for irrigation farming because of the nature of our land here, its abandonment has led to a lot of destruction,” he said.

Located in Dusti Local Government Area in Katsina North Senatorial District, the disrepair of the dam is even more bewildering if one considers that in 2017 and 2018, N90 million (N40 million in 2017 and N50 million in 2018) was budgeted for its rehabilitation by the Sokoto Rima River Basin Development Authority (SRRBDA).

Although millions of naira was released, SRRBDA declined to reveal the actual amount eventually released for the rehabilitation of the dam.

The rehabilitation, alongside some school projects, was nominated by the former senator representing the senatorial district, Mustapha Bukar, as his constituency project. Mr Bukar, however, died in April 2018.

Local officials and inhabitants of the area around the dam said work in the dam was discontinued after the senator’s death.

“Since 2018, after the death of our senator, the dam project has been abandoned,” says Anas Abubakar, a youth leader in Dan’aunai village.

Similarly, the caretaker chairman of Dusti Local Government Area, Hassan Gambo, said the death of the lawmaker “was the reason the dam and other federal projects in the area have been abandoned”.

“Since 2018 that we lost our senator, most of the federal government constituency projects have not been fully executed, but I will beseech the present senator as regards your inquiry to make a review on this particular project.”

The incumbent senator of the district, Baba Kaita, however, said he was not aware of any rehabilitation of a dam in Dusti.

He, however, said part of his obligations was to crown the efforts of his predecessor.

“I can’t give an answer to a question that I don’t understand, I am just hearing this for the first time since I assumed office. But I am not so sure if there is an ongoing project in that location you mentioned, and if your claims are correct, I am telling you now that I am not aware of it. I am assuring you that I will start my investigative approach on the project that you are talking about,” he said.

When reached for comment, SRRBDA’s project manager for the dam, Abdullah DanMagaji said “there was a lot to reveal about the project” but declined to speak further. He said he does not have the permission of his superiors to speak about the project.

“Try to listen to me please, we don’t just attend to journalists until we have directives to do that, and I will call the project officer to look into the kind of details that you are seeking for,” he said.

Ahmed Daura an aide to late Mr Bukar, told this reporter that the contractor in charge of the rehabilitation of the dam is known as “Akuna Matata” Construction Company. He also directed this reporter to Johnson Akinfolu, an official of the company.

When approached for comments, Mr Akinfolu explained that his company embarked on the project early in 2017 and left there at the beginning of 2018.

“But after a short while, we had no option than to terminate the contract because SRRBDA did not provide the funds needed for his company to complete the work,” he added.

But when asked to state the amount his company received from SRRBDA, he asked the reporter to ask the supervising agency.

“Maybe I will have to go back to our files to check the total amount released for the two phases we completed, but I must be sincere with you, the key problem is funding. Sokoto Rima will provide you with every other thing you need to know,” he said.