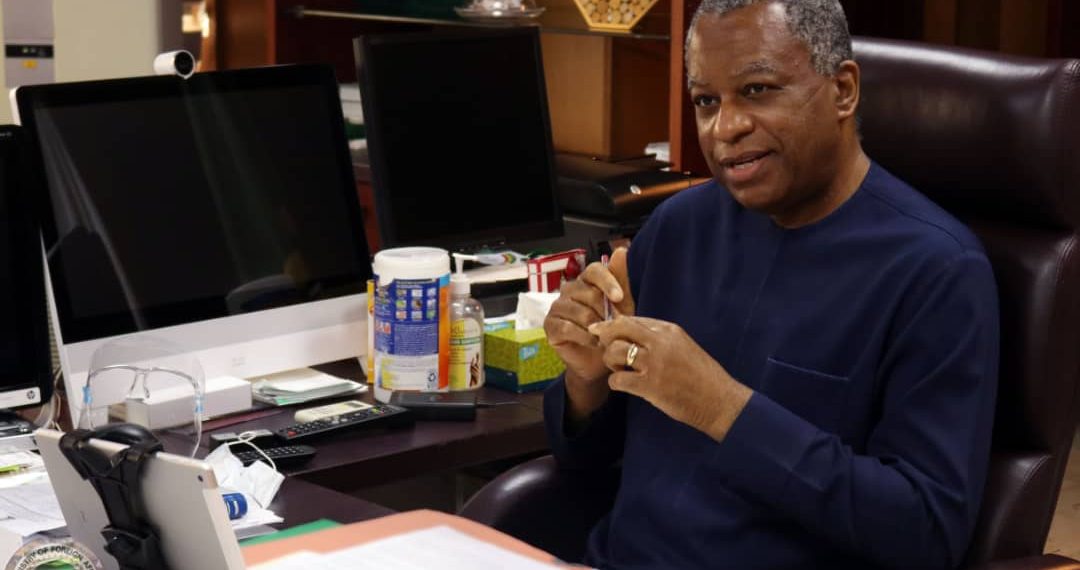 Scorecard: Knocks, plaudits for Onyeama, one year after reappointment as foreign affairs minister

Unlike his first stint between 2015 and 2019, the past one year was quite a busy one for Geoffrey Onyeama, Nigeria’s Foreign Affairs minister.

This is especially because of the COVID-19 outbreak which crippled economic and social activities both locally and internationally.

Mr Onyeama was re-appointed by President Muhammadu Buhari on August 21 alongside 43 new and old ministers.

He was to continue with plans on reforming Nigeria’s foreign embassies and consulates and improving global business relations for Nigerians as well as creating more cooperation with neighboring African countries especially in the fight against corruption.

But four months into his second term, COVID-19, a rare strain of the coronavirus which has continued to defy science emerged in a local Wuhan market in China.

Nigeria which reported its index case of the contagion on February 28, now has more than 50, 000 infections with nearly a thousand fatalities thus far.

The disease has so far spread to over 200 countries, infecting more than 23 million people and leading to the deaths of over 810, 000 globally, disrupting international relations and causing diplomatic tensions, as well as resulting in a United Nations Security Council resolution demanding an end to global wars.

This changed the trajectory of Mr Onyeama’s foreign affairs ministry, with the minister assuming a new role of working with Nigerian embassies around the world to come with evacuation strategies to bring home Nigerians held up by the movement restrictions introduced by countries as part of containment measures against the disease.

He is also a member of the coronavirus Presidential Task Force set up by President Buhari to coordinate Nigeria’s response strategy alongside the NCDC, the country’s infectious disease centre.

He even contracted COVID-19 while trying to help Nigeria fight the contagion.

Here are some key policy initiatives of the ministry and how they have succeeded and or failed:

“Received sickening and depressing news of continued burning and looting of Nigerian shops and premises in #SouthAfrica by mindless criminals with ineffective police protection. Enough is enough. We will take definitive measures,” the minister had written in his official twitter handle of the attacks on Nigerians in South Africa.

The minister promised to promote the African Continental Free Trade Agreement (AfCTA), a treaty seeking to establish a continent-wide marketplace with increased trade and freer movement among its major pillars.

In the wake of the COVID-19 outbreak, the official promised to ensure full evacuation of Nigerians trapped in foreign countries.

The ministry promptly responded to the xenophobic attacks against Nigerians in South Africa.

The foreign affairs ministry in collaboration with Air Peace, a Nigerian airline, volunteered to send an aircraft to South Africa to bring back Nigerians willing to return.

About 500 Nigerians were safely brought home. PREMIUM TIMES reported how the returnees were gifted with a SIM cards and airtime to last two months and some money for transportation.

With the signing of the African Continental Free Trade Agreement (AfCTA), Nigeria partnered with other countries to guarantee free movement of people to boost economic potentials of Africa.

Mr Onyeama also played a major role in the implementation of the Nigeria Visa Policy 2020 operationalisation at missions abroad.

About 6,317 Nigerians have been evacuated from around the world since the coronavirus pandemic erupted, according to the foreign affairs ministry.

The Nigerians in Diaspora Commission (NIDCOM), an arm of the foreign affairs ministry, is aiding the identification of Nigerians who have contracted COVID-19 or died of the contagion especially in Europe and America where the pandemic has a foothold.

Because of the prompt response of Nigeria’s foreign ministry, Ghana’s Ministry of Foreign Affairs in June apologised to the Nigerian government over an attack on the Nigerian High Commission’s building in Accra.

The ministry was heavily criticised for its handling of the evacuation process amid the coronavirus pandemic.

While many complained about the evacuation fee of N290,000, Mr Onyeama said the federal government had no resources to foot the bills of returning Nigerians.

At the initial stage of the evacuation, the minister, at a May briefing by the Presidential Task Force on COVID-19, said the fee covered accommodation and feeding bill of the returnees who were taken in on a 14-day quarantine before they dispersed to their various homes.

But at a later review of the exercise, Mr Onyeama said evacuees would no longer go into 14-day government monitored quarantine if they test negative from their countries of residence.

The situation, however, stalled the evacuation process, leaving several Nigerians stranded in diaspora.

Even though the visa policy 2020 have been signed, it is yet to be operationalised due to the coronavirus.

The ministry has not been able to reform Nigeria’s foreign embassies and consulates. This was exposed by the shabby handling of Nigerians by the country’s several missions abroad in the wake of the coronavirus.

The AfCTA was also stalled due to the attention channeled to fighting the COVID-19 pandemic.

Analysts believe the ministry did not do so well in fostering economic and social relations with leading world powers. For instance, the foreign affairs ministry has not been able to upturn the visa restrictions slammed on Nigeria along with four other African countries by the U.S.

In his one year in office, the minister performed fairly well considering the emergency that came with the COVID-19 pandemic and his new role at the PTF.

Also, during the period, the minister tested positive to COVID-19 while trying to coordinate the evacuation of Nigerians from other countries. He has since recovered.

Train rams into bus in Lagos