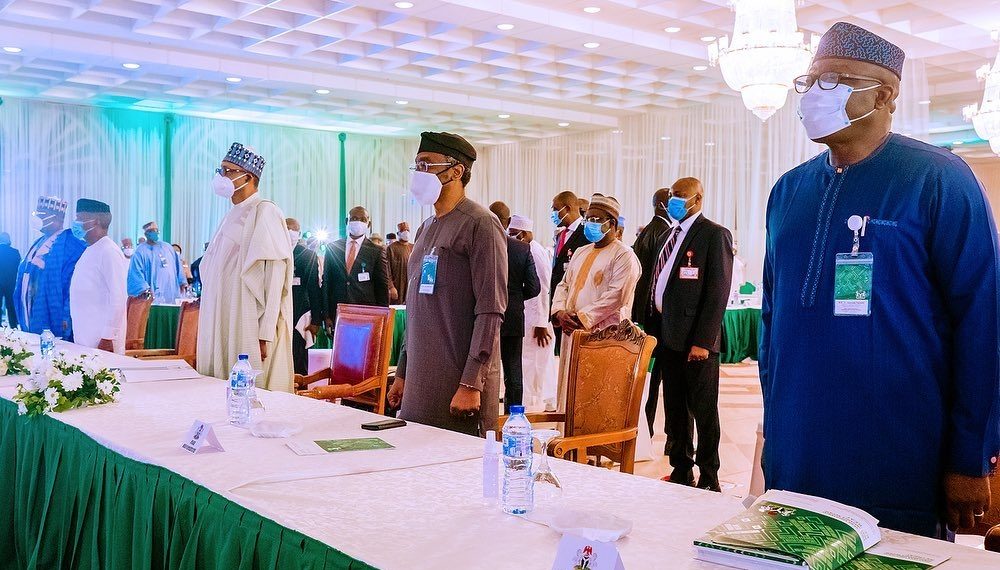 President Muhammadu Buhari has charged his cabinet members to be ‘offensive’ in spreading the successes of his administration and not allow ‘politically motivated’ statements drown his government’s message of successful performance.

Mr Buhari said his administration, which aimed at lifting 100 million Nigerians out of poverty, has done well in the last one year.

His assertions come amidst rising unemployment and recent protests by Nigerians over the recent hikes in electricity tariff and pump price of fuel.

The president made his stance known on Tuesday, in his address at the retreat for ministers, permanent secretaries and other top government officials working with him.

The event held at the State House Conference Centre, Presidential Villa, Abuja on Monday and Tuesday.

PREMIUM TIMES reported how the Secretary to the Government of the Federation (SGF), Boss Mustapha, at the first day of the retreat, on Monday, said the first year of Mr Buhari’s second term in office “has been the most productive of this government.”

Speaking on Tuesday, Mr Buhari said the scorecard of the cabinet members shows that “progress has been made on all fronts, in spite of the multiple challenges”.

“Let me reassure all Nigerians that this administration remains resolute in initiating programmes aimed at improving the quality of lives and uplifting 100 million Nigerians out of poverty over the next ten years.”

He also said his administration’s policies include the protection of lives and properties and ensuring equitable distribution of the nation’s wealth.

“I am glad that these policies, programmes and projects have recorded appreciable successes. Our renewed vigour on agriculture has been demonstrated through our Anchor Borrowers Programme and the Presidential Fertiliser Initiative.”

“We have made progress on the railway projects with a view to connecting different parts of the country. The Lagos-Ibadan rail line is up and working. The Abuja-Kaduna rail line is efficiently running. Arrangements are being made to complete the Ibadan – Kano, commence the Port Harcourt – Maiduguri line which will connect the Southern and Eastern States to the Northern States.

“Work is ongoing at the 2nd Niger Bridge and is at 46 per cent completion. We hope to commission the project before the end of our tenure in 2023. Several contracts have been awarded to rehabilitate, reconstruct and construct our arterial roads, to reduce the hardship to commuters and increase economic activities across the States.

“We have flagged off the Ajaokuta-Kaduna-Kano (AKK) Gas Pipeline Project which is being developed at this critical time in Nigeria’s commitment to increasing our infrastructure assets and promote the use of gas in the domestic market.”

Mr Buhari also rated his administration high in the fight against insecurity and anti-corruption.

“Our security operations in the Niger Delta, North Central and North Western States are yielding desired results. We hope to get rid of bandits, kidnappers and other criminal elements in these regions,” he said. “The advent of COVID-19 pandemic and its attendant negative effect is being addressed through the constitution of a Presidential Task Force for proper coordination and the launch of the twelve-month Economic Sustainability Plan to cushion the effect of the pandemic on our citizens and business owners.”

Reacting to the various criticism against his government, Mr Buhari brushed them off, describing them as ‘politically motivated.’

“I have to charge all of you to defend the government vigorously and not allow any irresponsible and politically motivated statements to keep spreading falsehoods about this government. Information to the public should be better packaged, go on the offensive, we are proud of our achievements and we should blow our own trumpets,” the Nigerian leader said.

“Let me also reiterate that all submissions for my attention or meeting requests be channelled through the Chief of Staff. While all Federal Executive Council matters be coordinated through the Secretary to the Government of the Federation.

“I have directed the Minister of Finance, Budget and National Planning, the Governor of Central Bank of Nigeria, and all other responsible Agencies to ensure speedy and timely release of funds to MDAs for implementation of the N2.3 Trillion Economic Sustainability Plan and the Capital Projects in the 2020 Budget. I also enjoin ministers to ensure that funds released are utilized efficiently and transparently in implementing the programmes and projects along the 9 Priorities of Government,” he said.

The current ministers were sworn in on August 21, 2019, with many of them making various promises.

Meanwhile, in the last two weeks, PREMIUM TIMES has been reviewing the performance of the ministers. While some of them posted modest performances, many performed below expectations.