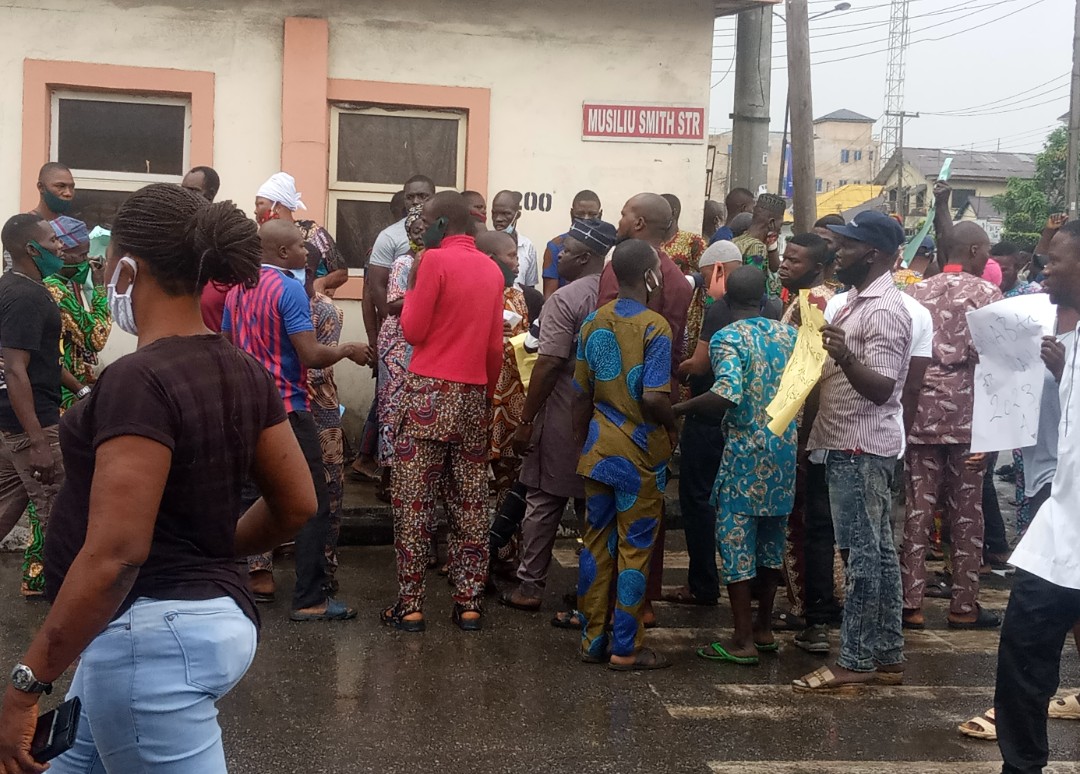 Scores of residents of Makoko, the biggest floating slum in Lagos, on Wednesday protested the proposed development of the community by the Lagos State government.

The residents who gathered at the Yaba local government development council area (LCDA) on Wednesday, expressed their displeasure at the proposed development.

The protesters, holding different placards, expressed their disapproval of the plan with messages such as “Do not evict us,” “Makoko is our land,” and many others.

The protesters also accused one of their leaders, Baale Aji, of selling them out to the state government.

“Thief, ole, thief,” they kept chanting at the sight of the accused Baale.

PREMIUM TIMES gathered that there is a proposed redevelopment of Makoko by a private developer who has already secured approval from the state government.

Following the approval, meetings were held with selected leaders of the community to inform them of the proposed development, which will affect parts or all of the community.

Makoko community, mostly surrounded by water comprises different tribes, including the Egun, Ijaw, Ilaje and many others.

The community which has always been like a favoured punching bag for the Lagos State Government as it has conducted several demolitions under different administrations.

PREMIUM TIMES reported how the Lagos government demolished parts of Makoko in 2012, forcefully evicting several households and displacing about 4,037 people.

The reason given then by the state government for the demolition and forceful eviction, was that the buildings were erected under high tension power lines.

Makoko to receive a face-lift

After several attempts by the Lagos State government to give the community a face-lift, plans have been concluded this time to develop Makoko, PREMIUM TIMES gathered on Wednesday.

The community was formally informed at the stakeholder’s engagement at the Yaba LCDA on Wednesday.

The meeting, which was attended by representatives of the community, saw reporters and third parties barred from gaining access.

Leaders and members of the community that were in attendance had access letters, stamped and signed by the local government. PREMIUM TIMES’ reporter was able to obtain such an access letter to gain entrance.

Addressing the community representatives on Wednesday, Omiyale Kayode, the chairman of Yaba LCDA, said that plans to develop Makoko have been signed by the state governor and there is no going back.

“I met one or two Baales on the issue and told them until I hear from the state government, nothing will be done about it,” he said.

Mr Kayode said he was formally informed about the plans to develop Makoko towards the end of 2019 and was introduced to the consultant that will handle the job.

“We selected 13 delegates from the communities, to attend state executive meeting in February.

“Virtually all the people at the meeting attested that the issue has been on. This is a government project and the government is recognizing the people and so it is not coming unawares.

“We thank God we have a governor that wants to listen and help and not put the people into any problem,” he said.

Mr Kayode informed the community that the development will happen in the shortest time possible and cannot be resisted by the people.

“In the situation on ground, it may not be possible for us to eat our cake and still have it. It is a matter for us to choose our interest and present to the government. The government will still carry out the project,” he said.

He added that he had attended several executive meetings at the state level where different portions of the community have been assigned to different developers.

“It is no more a rumour, it is fact. In a short time, development will come to Makoko,” he said.

The Commissioner for Waterfront Infrastructure Development, Kabiru Ahmed, who was also at the meeting, assured the community that no one will be left behind by the government, but that everyone must be on the same page.

“We are here to intimate you that that place cannot continue to be the way it is, there is going to be development and progress.”

Mr Ahmed said the government has put the welfare of the people first and will also ensure that the interests of the people are protected.

“Avoid fictitious claims, because that is what causes problems. Put the right thing together, the governor is a very humane and humble person,” he said.

Mr Kayode said to the representatives of Makoko community that there are only two options presented to them by the state government; to resettle them or compensate those with valid documents of their property.

“Government can provide land in another area where many of us can be settled, government is capable. Or tender appropriate documents containing the value of the properties to the government to receive compensation,” he said.

The local government chairman said he is unaware of a third option.

Reacting to the representatives of the government, Baale of Makoko, Adekunle Olaiya said those selected to represent Makoko at the state level have no claim to lands there.

“When we start playing politics with the lives of the people, we are starting a fire that cannot be quenched. No development can be done with the Olaiya family, the initial owners.

“For peace to reign, we want development but things must be done appropriately. We want progress, but you are not tackling it from the root. Call a meeting of people who own Makoko and not a meeting of politicians,” he said.

Mudashiru Odekunle, a leader in the community, said they have had several discussions with the contractor to show them the survey of the proposed development, but he has refused.

“We need to know where exactly will be affected and what the government wants to do there,” he said.

Some representatives present added that it is alleged that some of their leaders have signed documents and collected money to allow the government carry out the development.

The commissioner and the council chairperson debunked the rumours saying they are untrue.

“No one has ever been given a dime and no agreement has been reached concerning the development of the community. All plans are still in progress,” the commissioner said.

The protesters who started their protest at the end of the meeting, chanting that they do not want to be evicted, were dispersed from the council premises.