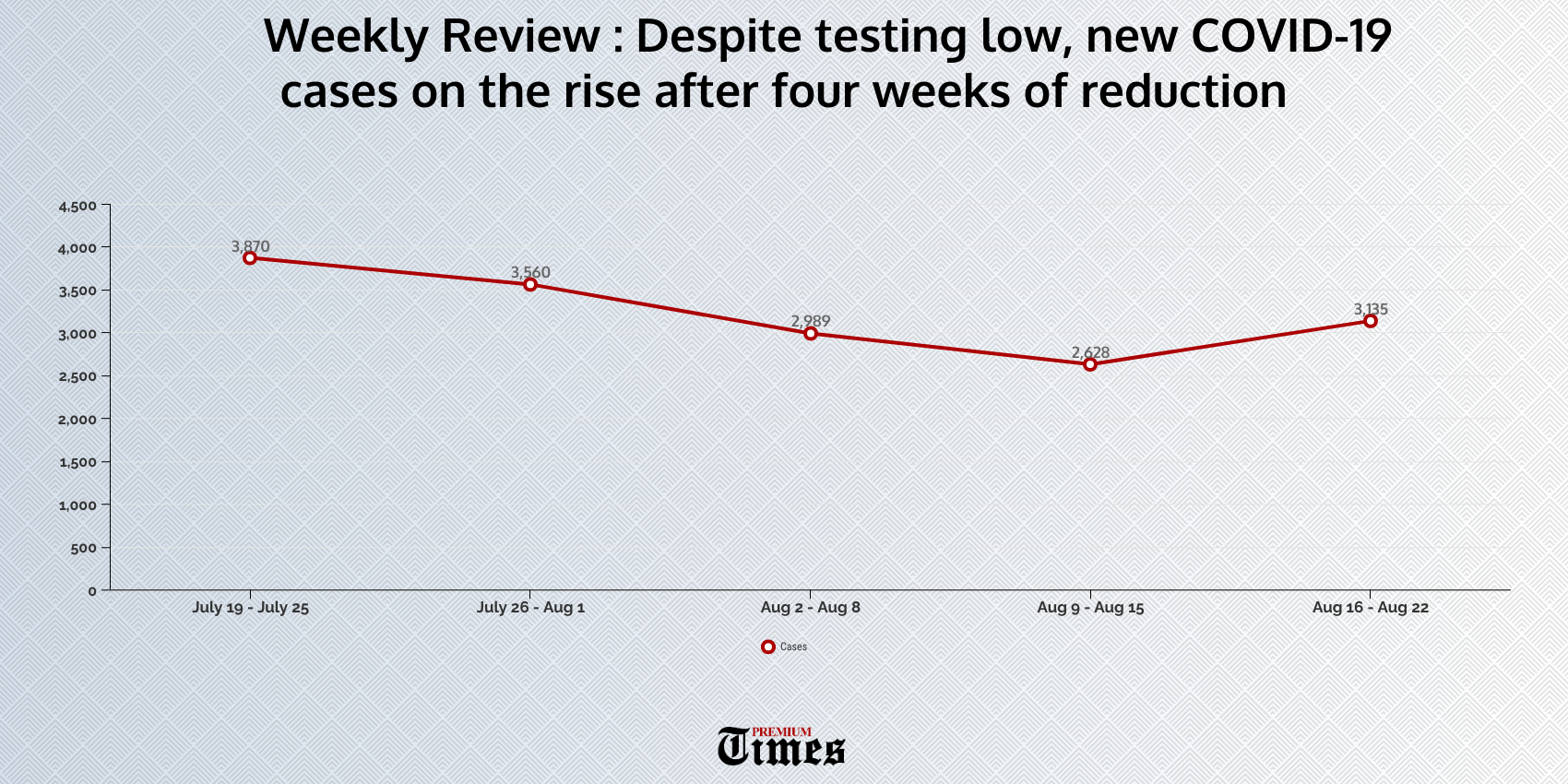 Last week, which marked the 33rd week of the pandemic in Nigeria, the country recorded 3,135 cases, a 16 per cent increase from the previous week’s record of 2,628 cases.

Before last week, the cases had reduced for four consecutive weeks despite increased testing.

While the previous reductions in new cases suggest that the country was overcoming its worst phase of the virus, the latest increase raises concerns on compliance with the safety protocols.

Nevertheless, the Presidential Task Force on COVID-19 and the Nigeria Centre for Disease Control (NCDC) have continually preached strict adherence to COVID-19 protocols including social distancing and use of face masks.

The situation might grow worse with the resumption of exit classes students, more civil servants and the gradual reopening of international flights.

In a surprising turn, Nigeria recorded its lowest testing rate in six weeks last week. The number of tests conducted went down by 34 per cent when compared with the previous week’s record.

Data from the public health agency showed that the 35,957 people tested the previous week was a six per cent increase from the 30,716 tested the preceding week. About 24,400 people were tested the week before that.

Nigeria has so far collected 374,077 samples since its first case was recorded in February.

The NCDC Director-General, Chikwe Ihekweazu, who appeared on Channels TV on Monday, clarified that the low testing capacity was not due to any fault of his agency or laboratories.

According to him, the reduction in the testing rate is as a result of some challenges including organizing, transporting samples for tests, and updating Nigerians with the result.

Further analysis showed that the recovery and death rates reduced compared to what was obtained in the previous week.

A total of 2,477 persons recovered from the disease and were discharged last week, which is a 24 per cent decrease when compared to the 3,264 persons discharged in the previous week.

The data also showed that a total of 23 persons died from the virus last week, which is the lowest weekly death recorded in the past four months.

The reduction in deaths could indicate an improvement in the management of COVID-19 cases despite the unavailability of a cure, and the potency of remdesivir, an anti-retroviral drug recommended for mild cases.

Recall that the health minister, Osagie Ehanire, in May, announced the usage of remdesivir in managing COVID-19 patients.

“We have been using that (remdesivir); we have tried that in Lagos too,” Mr Ehanire said while addressing members of the House of Representatives.

As of the time of reporting, Nigeria has confirmed 51,905 cases. Of this figure, 38,767 have been discharged and 997 deaths have been recorded in 36 states and the Federal Capital Territory.

The other five states with the highest number of confirmed cases are FCT, Oyo, Edo, Plateau and Rivers states.

Of all the 36 states and the FCT, only Benue, Jigawa, Kebbi, Yobe, and Kogi did not record at least a fresh case last week.

On Sunday, 298 new cases of COVID-19 were reported in the country.

On Monday, 417 new cases of the pandemic were reported in the country.

On Wednesday, 593 new cases of COVID-19 were reported in the country.

On Friday, 340 new cases of the pandemic were recorded.

Nigerian players that have played in UEFA Champions League Final