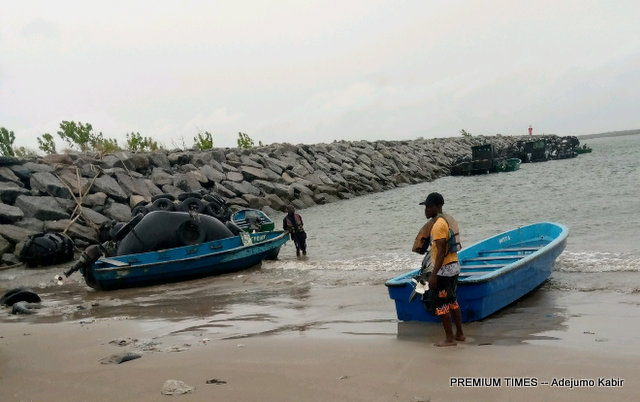 Sherifat Jamal, a 70-year-old woman, journeyed to Tarkwa Bay from Oyo State to start a new life in 1990 after losing her husband to an accident.

Stella Ajayi, a single mother, told PREMIUM TIMES that garri (cassava flakes) is now a precious meal and she takes it once in a day.

Moreso, Segun Oyenuga, works as a tour guard for foreigners who visit the community for tourism is now jobless. The closure of airports and borders have denied foreigners from visiting Tarkwa Bay.

“I got to Tarkwa bay in 1989 and I married here – gave birth and was feeding my family with the little make as tour guide for the white” he narrated. “But in January, I saw all my three bedroom flat apartment brought down. After three weeks, they came again to beat us for not leaving. Where exactly are we suppose to go?” he asked.

“The community now belongs to the military. I have been brutalised by 2/2 wood for challenging them. No palliatives nor any sensitisation in this community. If a second coming to the world is real, I don’t pray to be a Nigerian. Almost everyone here now eat once daily or fast.”

A PREMIUM TIMES reporter visited the community. He noticed that most of the houses in the community were demolished.

The students in the only school in Tarkwa Bay have been transferred to other public schools in the state while the school was left untouched.

Those left in the community are those who have nowhere to go and many now sleep in churches/mosques (not demolished) and classrooms in the school.

As part of effort to curb the spread of coronavirus, President Muhammadu Buhari enacted the COVID-19 Regulation 2020 pursuant to the powers conferred on him by s. 2,3 and 4 of the Quarantine Act.

In paragraph 5(1) of the Regulation, the FGN directed the implementation of direct food/ cash distribution to 2.6 million households comprising the most vulnerable. Mr Buhari later extended to 3.6 million to accommodate more people.

The president directed the ministry of humanitarian affairs in March to pay N20,000 (a cumulative of N5,000 for four months). This vulnerable group comprise those who reside around the satellite and commuter towns and communities in Lagos and Abuja and earn daily wages for their sustenance, such as artisans and petty traders.

As the state with the epicentre of the virus in Nigeria, Lagos got N10 billion from the Federal Government to support emergency response to the pandemic.

PREMIUM TIMES recalls that at the early stage of the pandemic in March, the state’s commissioner for information, Gbenga Omotosho, disclosed that government would be giving five-kilogramme bags of rice, beans, garri, loaves of bread, dry pepper, water “and some elements of Vitamin C,” to 200,000 poor and vulnerable households. He did not the criteria that would be used for distribution.

As of the time of this investigation, Nigeria government has got about N27 billion donations from individuals and corporate organisations to manage the pandemic. In addition, the International Monetary Fund (IMF) in May also released $3.4 billion to Nigeria to address economic challenges of COVID-19.

Despite these huge funds, displaced persons in Tarkwa Bay said they have not benefitted.

Mrs Jamal said “if I get palliatives from the government I would have been happy. In fact, this would have reduced the health damage the demolition caused on me. Like others, I did not get anything.”

When PREMIUM TIMES told Mr Omotosho about the complaints, he said most of the buildings were demolished “because the community is not safe for residents to live in”.

He raised the allegations of bursting of pipelines against the residents which he claimed was dangerous to the state at large.

He also addressed the issue of palliative.

“Lagos government did not promise to give palliatives to all Lagos ‘vulnerables’. What the government said was that 200,000 households would benefit from palliatives. Should people complain that they didn’t get palliatives? You should focus on more productive and social issues.

“The truth is that we don’t have data for the poor. Some of the people complaining do not even have LASRRA. If you ask them to register for LASRRA, they won’t. How do you then expect the government to cater for all.”

When asked if ‘LASRRA’ registration was a prerequisite for getting cash and food palliative, Mr Omotosho simply responded: “we used community development association, religious bodies, office of people living with disabilities, and money NGOs to track communities.

Meanwhile, the humanitarian affairs ministry’s spokesperson, Henry Ayede, did not respond to calls and text messages.

Meanwhile, an official of the Socio-Economic Rights and Accountability Project (SERAP), Kolawole Oluwadare, said the group has filed a lawsuit asking the Federal High Court, Abuja, to order the Federal Government and Central Bank of Nigeria (CBN) to “publicly identify and name Nigerians who have so far benefited from any cash payments, cash transfers, food distribution and other reliefs and palliatives during the lockdown in Abuja, Lagos and Ogun states because of COVID-19.”

In the suit filed in June, SERAP is seeking: “an order for leave to apply for judicial review and an order of mandamus to compel Ms Sadia Umar-Farouk, Minister of Humanitarian Affairs, Disasters Management and Social Development, and Mr Godwin Emefiele, CBN governor, to publish spending details of public funds and private sector donations to provide socio-economic benefits to the country’s poorest and most vulnerable people.”

SERAP is also seeking “an order to direct and compel Ms Umar-Farouk and Mr Emefiele to publish up-to-date list of donations and names of those who have made payments as per their publicly announced donations; spending details of the N500 billion COVID-19 intervention fund, and the names of beneficiaries, and whether such beneficiaries include people living with disabilities (PWDs).”