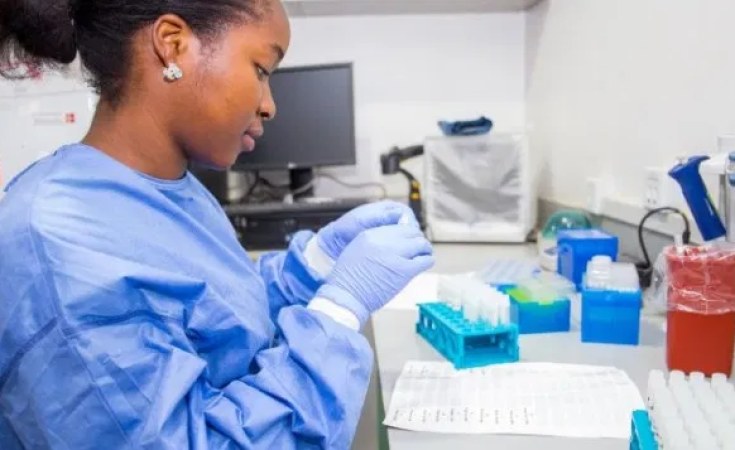 Faith Osamaye, a Youth Corps member is one of the young scientists working at the NCDC’s National Reference Laboratory as Nigeria responds for the outbreak of COVID-19. Photo: Nigeria Health Watch

The Nigerian government had on April 28 announced its target of testing at least two million people within the next three months.

Chikwe Ihekweazu, the head of Nigeria’s Centre for Disease Control (NCDC), at a Presidential Task Force on COVID-19 briefing, had said the move became necessary as the country is lagging behind in terms of testing.

He admitted that the country encountered challenges with testing at the onset of the pandemic but has now scaled up its testing capacity in recent months.

“Our supply chain is better than it was at the beginning of the outbreak, and the lack of reagents or supplies has not affected testing in any part of the country in the last three months,” he said then.

Mr Ihekweazu said, to meet up to the two million target, about 50,000 people will be tested per state and in the Federal Capital Territory (FCT), “depending on the population size”.

Barely six days to the completion of the 90 days testing target, the country’s testing capacity is still very low.

Mr Ihekweazu had suggested that the country was lagging behind in testing “because state governments were not collecting enough samples and individuals were not coming forward to be tested”.

“The success of this target depends largely on states and individuals. We urge states to collect more samples and individuals to report to the appropriate authorities if they have COVID-19 symptoms.

”Several states have worked with partners to establish sample collection sites and other approaches for sample collection. This is an excellent step and we urge all states to own these targets – we can only know the true burden of COVID-19 if we test more samples,” he said.

Health experts warn that low testing capacity may lead to non-containment of the virus and could lead to more deaths.

A review of data provided by NCDC on July 14 showed a breakdown of testing conducted so far in the 36 states and the Federal Capital Territory (FCT).

The states topping the testing chart are Lagos, Oyo, Kano, Edo and the FCT.

PREMIUM TIMES reviews states topping and lagging behind on the testing chart.

The state tops the testing chart with 55,152 samples tested as of July 14. The state remains the epicentre of the virus since Nigeria’s index case was recorded in February.

From the samples tested, 12,711 cases were positive of which 1,935 had been treated and discharged. About 175 deaths had been recorded in the state.

Data from the 2006 population census published by the Nigeria Bureau of Statistics (NBS) places Lagos state’s population at over nine million.

The nation’s capital with an estimated population of more than 2.4 million had tested 23,169 samples as of July 14. From the samples tested, 2,687 returned as positive. Also, 810 people had been treated and successfully discharged while 39 deaths recorded.

The North-west state with a population of over nine million had tested 19,916 samples of which 1,314 returned positive. However, 1,035 cases had been treated and discharged and 52 persons had died from the virus.

As of July 14, the South-west state had tested 12,414 samples of which 1,882 cases were confirmed. Also, 1,008 persons had been treated and discharged while 19 deaths had been recorded.

Data from the 2006 population census published by the NBS places the state’s population at over five million. This shows that the state still has a long way to go in terms of COVID-19 testing.

Edo had tested 9,359 samples of COVID-19 as of July 14 and has recorded 1,807 cases of the virus. Of these 1,039 persons had been successfully treated and discharged and 60 deaths recorded.

Edo has a population of over three million, according to data from the 2006 population census published by the NBS

Taraba, with an estimated population of two million has tested 438 samples of which 30 cases were confirmed. Also, 11 persons had been treated and discharged and no deaths recorded from the virus.

Zamfara had tested 316 persons as of July 14 out of which 76 cases were confirmed positive. Also, 71 persons had been treated and discharged. Five deaths were recorded. Zamfara state’s population is estimated to be over three million.

Yobe had only tested 134 persons of its over two million estimated population. Of this, 62 confirmed cases had been recorded. Also, 51 persons had been treated and discharged and eight deaths recorded from the virus.

Kogi had tested 24 samples for COVID-19, out of which five cases were confirmed. Three persons had been treated and discharged while two deaths were recorded.

Cross River is the last of the 36 states in the federation to report a COVID-19 case. The same denial scenario that played out in Kogi equally happened in the South-south state.

The state had tested 16 persons as of July 14, of which 10 cases were confirmed positive. Three persons had been treated and discharged while one person had died from the virus.