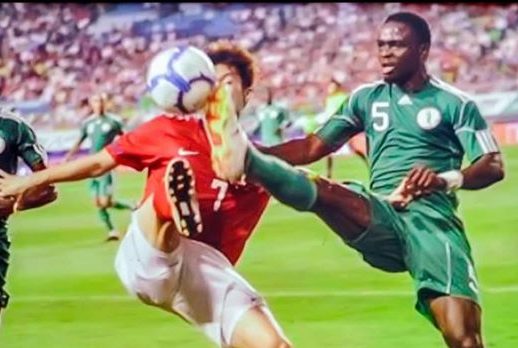 Sam Sodje in action for Nigeria

INTERVIEW: My life after retirement from football – Sam Sodje

A former Super Eagles defender, Sam Sodje, could best be described as a no-nonsense player in his active days.

Even though he could only manage just a few appearances for the Nigeria national team, Sam Sodje’s exploits for over 15 years across majorly English clubs speaks volume.

In this interview, Sam who is quite passionate about footballers making the best out of their lives after football speaks on what he has delved into after quitting the round leather game as a professional player.

Fondly called Super Sam in his active days and also a proud member of the Sodje family football dynasty, the ex-Leeds United ace speaks on the need for the Super Eagles to have a coach specifically for its defenders.

PT: After retirement, sportsmen and women find themselves in a world they never prepare for. How would you describe life after sports?

Sodje: For me, I’m enjoying it. Fortunately enough, I was able to play football for long before I quit. I got injured four to five years before I quit and had the chance to go back to school.

It’s really tough. Apart from playing, finance is another thing. I really want to advise people but you will understand where I’m coming from if you’re a footballer. It is really tough, you might not be earning much money but mentally and physically it can be a tough one. I advise people that they must accept it when active football is over, then you must find something else to do.

PT: Nigerians would like to know what you’re into now that you’re done with active football

Sodje: I managed to do some level of coaching and made progress in level 1 and 2 of coaching. But I really wanted to do something that will get me out there. I run my own company at the moment. I’m into construction machine leasing company back in Nigeria. I’m doing well and the company is doing well too. Going forward, that’s what I do. I’m into construction and machine leasing. I’m a close friend of Delta State Sports Commission and I do advise them on sports matters.

PT: Talking about planning for life after sports, what message are you passing out to footballers on the need to plan for raining days?

Sodje: My goal is to make upcoming young ones to understand that yes you can play football but be ready for life after sports. Embrace education and face whatever you chose to do squarely. I want to be someone they look up to. I played the game to a high level, I played for my country and I played in the Premiership.

PT: How would you sum up your football career?

Sodje: Incredible! From where I came from, I grew up in Warri and London, I want to say I had a wonderful career and I’m proud of that. I played in the UK and a year in Greece. I have really achieved a lot as a footballer.

PT: You carry a family dynasty of having brothers who are professional footballers. What’s would you say was key to success?

Sodje: The key was simply because we are a sporting family and we felt it was about time we play for the national team. Efe went to the World Cup in 2002 and had a nice outing with his bandana. We’re Nigerians and it’s every players’ dream to play for Nigeria.

PT: Take a closer look at Super Eagles and tell us the highs and lows of coach Gernot Rohr as national team gaffer?

Sodje: I’m lucky to be closer to them because I work with the Delta State Commission. They come around and we work with them first hand. I’ve seen the manager and watched the players trained too. I realise we now have a bunch of talented footballers who are also doing well with their respective clubs. The scouting system is also good but there is always room for improvement.

PT: You once played in Super Eagles heart of the defence. Can you let us into the secret of achieving a watertight defence?

Sodje: I’ve always said it before now that you can have ten defenders but if they’re not trained to defend as a unit you will always concede goals. I have played the game and understand what defending is always about. We have a group of talented individual in our defence but it’s different when you come to the national team, but once the coach didn’t train them to defend as a unit we will always struggle. It’s high time we have a defensive coach in that team.

PT: Do you see the possibility of Ighalo returning to Super Eagles in the nearest future?

Sodje: Ighalo is a player with lots of confidence. You cannot be jealous of him but be happy for him. He is good enough to play for the national team if he wants to play. He said he retired because China is too far, but now that he plays for Manchester United, let’s see what he can do for the national team

PT: Your life epistle won’t be complete without mentioning about the match-fixing scandal and how the court absolved you of all accusations.

Sodje: It’s gone now. Once you’re a black man, they always want to set you up and make sure they bring you down. It’s gone now and I’ve moved on. I’m so proud that I stood strong and I thank God for my good lawyer. I have been looked after.

PT: When are you getting your compensation for defamation of character?

Sodje: They’ve done a little bit, they paid a sum maybe we can talk about that in future. That’s what black people get as you can see what is happening in the world now. But I just want to let go and moved on.

PT: Thank you for your time