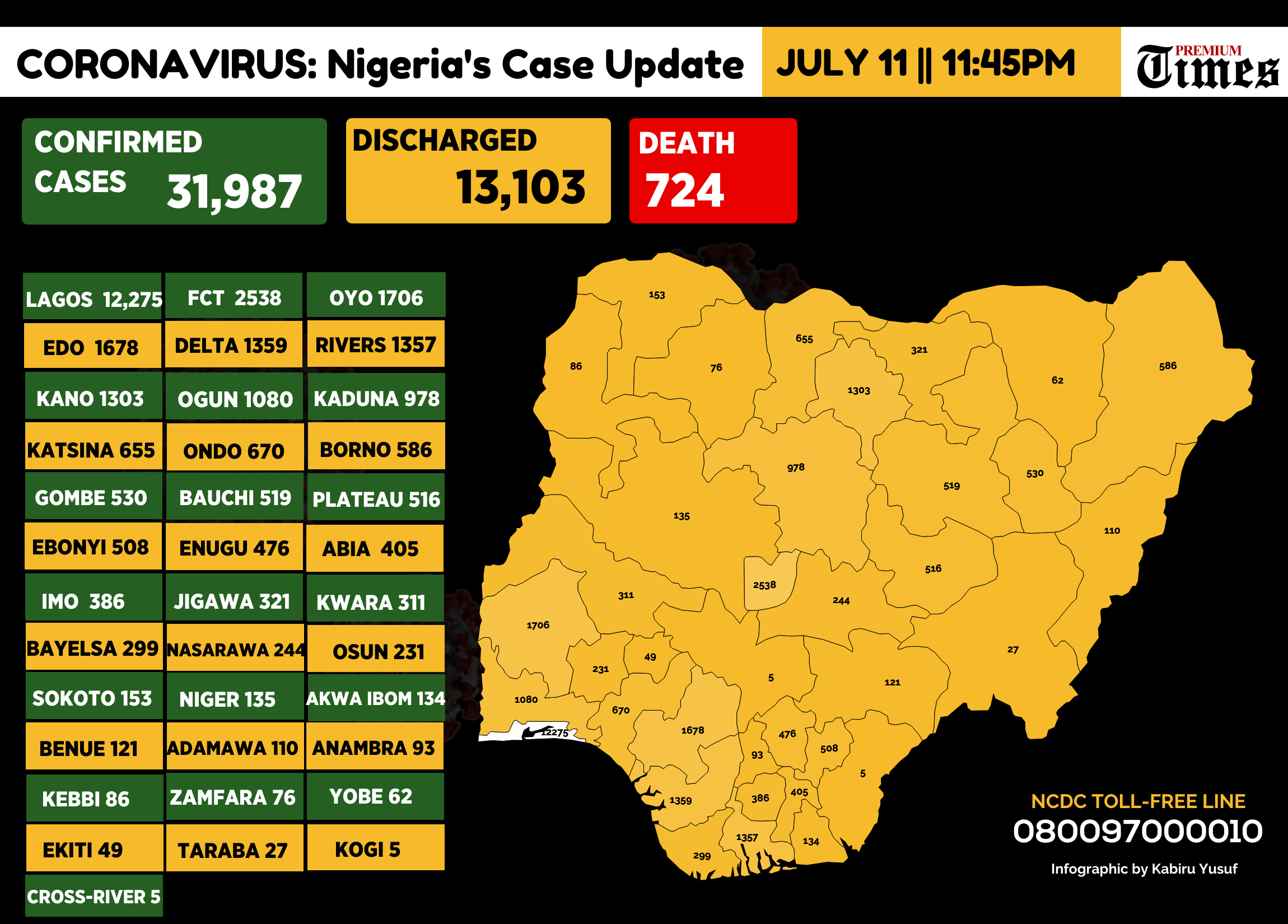 For the second week in a row, new coronavirus infections reduced in Nigeria despite an increase in the number of people tested, PREMIUM TIMES’s review of official data shows.

The previous week’s reduction in new cases was the first after six consecutive weeks of increase.

Nigeria recorded 3,823 new cases in the past week (July 5-July 11), a six per cent reduction compared to the 4,087 new infections recorded in the previous week.

The new cases dropped despite an increase in the number of people tested across Nigeria last week, suggesting the country’s COVID-19 curve may be on a steady decline.

Data from the Nigeria Centre for Disease Control (NCDC) showed that 30,077 tests were conducted last week, a 30 per cent increase from the 21,030 tested the previous week.

While new cases reduced, the number of people who recovered from the virus and were discharged reduced significantly last week.

Also, 90 new deaths were reported between last Sunday and Saturday, which amounts to a 20 per cent increase when compared with the 72 who died from the virus in the previous week.

Amongst the prominent people who lost their lives to the disease last week was the Chief of Staff to Kwara State Governor, Aminu Logun and a former chairman of the Nigerian Medical Association (NMA) in Ondo State, Matthew Adeyeri.

With the increasing number of confirmed cases in the country, NCDC has said in the absence of a vaccine, compliance with infection prevention and control (IPC) measures remains the most effective intervention to control the COVID-19 outbreak.

The agency and experts have stated that the implication of non-compliance with safety protocols might be grievous with the resumption of domestic flights and interstate travels.

Nigerians have been repeatedly told to ensure the use of face masks and maintain social distancing, although both have been largely breached by residents.

Lagos State remains the epicentre for the disease with the highest number of confirmed cases and deaths in the country, while Zamfara has not reported any new confirmed case in the past 54 days.

The other five states with the highest number of confirmed cases are FCT, Oyo, Edo, Delta and Rivers.

As regards testing, the country has so far collected 178,265 samples since the beginning of the outbreak in Nigeria in February.

On Sunday, 544 new cases of COVID19 were reported in the country.

A total of 460 new cases of the pandemic were reported on Wednesday which brought the number of confirmed cases to 30,249.

On Thursday, 499 new cases of COVID-19 were reported in the country.

On Saturday 664 new cases of the viral infection were recorded.