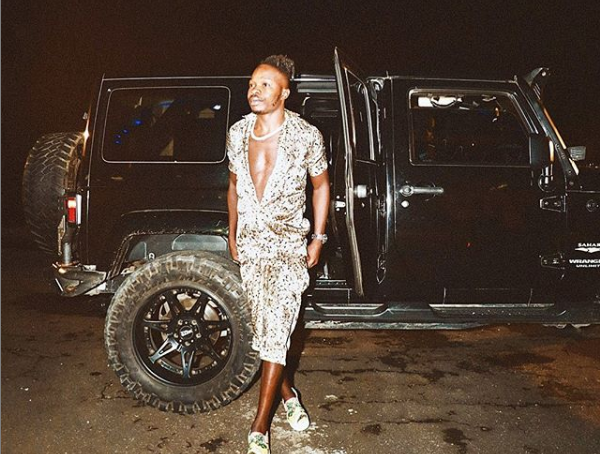 Three weeks after he breached the interstate travel ban to perform at an Abuja concert, controversial Nigerian singer, Azeez Fashola, also known as Naira Marley, is yet to be arrested or prosecuted.

None of the organisers of the concert has also been arrested or prosecuted.

The concert was put together by Play Network Africa, Traffic Bar, and El’Carnival, and was sponsored by Glenfiddich.

In clear defiance of authorities’ restriction on intestate travels, the singer flew inside a private jet from Lagos to Abuja to perform at the sold-out concert held at Jabi Lake Mall, before he reportedly flew back to Lagos.

In defence, the federal government said it approved the flight that flew in the singer, but it was meant to fly in a justice, Adefope Okojie, from Lagos to Abuja and back to Lagos “for essential purposes and not the musician.”

As a deterrence for violating the ban on public gatherings, the Federal Capital Territory Administration (FCTA) sealed Jabi Lake Mall, the venue of the concert.

Following this, the aviation minister, Hadi Sirika, announced that Executive Jets Services Ltd, owners of the private jet, had been suspended indefinitely.

He added that the captain who operated the flight “would be sanctioned for misleading the control tower.”

The aviation company’s chief executive officer, Sam Iwu, then came out to apologise for flying Naira Marley to the Abuja concert, saying Marley’s name was mistaken for “Fashola Babatunde,” works and housing minister.

Mr Iwu said his firm was tricked into flying a “bunch of useless people,” a statement that Marley denounced, tweeting “(it) is not only defamation but oppressive. The statement by the CEO is arrogant and silly. #NobodyIsUseless.”

The concert and what followed sparked outrage on social media at the time. Some Nigerians drew a parallel between the event and that of Nollywood actress, Funke Akindele, who was on April 6, arrested and fined for hosting a party in her Lekki home in violation of the coronavirus lockdown restrictions.

Naira Marley, who is not a stranger to controversies, was also indicted when he showed up at the party which Akinedele organised in honour of her husband, Abdulrasheed Bello, also known as JJC Skillz.

Repeated calls and text messages seeking to get comments from the FCT police spokesperson, Anjuguri Manzah, between Saturday and Sunday were not answered.

On his part, the chairman, FCT ministerial task force, Attah Ikharo, when asked why the singer and his cohorts have not been arrested and charged for breaching the lockdown directive, said it is the job of the Lagos State authorities.

He said he regretted that his team was unable to arrest the singer before he flew out of the FCT, but he maintained that the responsibility is now at the doorstep of the Lagos State government.

Asked if the task force of each state shares intelligence, he said they do not on enforcement grounds, but they do so on health grounds.

He added that it is the “job of the federal government” to enforce its directives, while the state government “can only support.”

“It really does not concern the Lagos government. It is an exclusive duty of the federal government,” he said.

Also, the spokesperson of the airport police command of Lagos State, Alabi Joseph, said all that have been done are the punitive measures meted out on the airline, the venue of the concert and some attendees of the events by Abuja authorities.

But he promised the Lagos State police will review the next step to “take over the matter.”