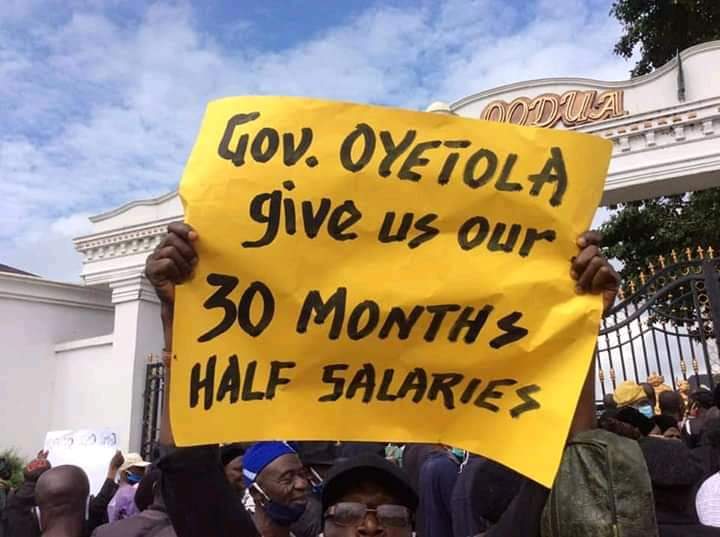 Many retirees under the aegis of Osun State Contributory Pension Retirees, on Wednesday, protested alleged non-payment of their pension and gratuity.

The retirees, who came out with different placards, disrupted vehicular movement at the palace of the Ooni of Ife, Adeyeye Ogunwusi, where they had taken their protest.

They said the state government had refused to pay their 30 months half-salary arrears (2016 till date), non-payment of gratuities (2015 till date) and non-payment of their monthly pensions since 2015.

Some of the inscriptions on their placards include “Governor Oyetola, give us our 30 months half salaries”, “Masses help us! We’re dying” among others.

Niyi Adefare, who led the protest, urged the Ife monarch to assist the helpless and some homeless senior citizens to get their entitlements.

He disclosed that despite their sickness and old age, the state government had neglected them.

“Some of us find it difficult to even buy drugs and other essentials because our monies have not been paid by the state government,” he lamented.

Another protester, Lawrence Ajayi, said the failure of the government to pay pensioners is an act of irresponsibility.

“Oyetola came on board and he’s boasting of not owing workers salaries. What then happens to some of us dying because of the negligence caused by his boss. We are dying of hunger and that’s why we took our protest to Ooni to help intervene. Coronavirus has added salt to our injuries.”

Before now, PREMIUM TIMES in January reported how some pensioners complained about being ejected from their houses and having to withdraw their children from school.

This newspaper’s publication revealed that Osun State, under Rauf Aregbesola, received several bailout funds from the federal government. Still, he defaulted in payment of salaries and pensions of retirees.

He defended himself during a ministerial screening in the Senate last year by saying he made “huge investment in the infrastructure” of the state.

The protesters said Governor Gboyega Oyetola has begun to look into the plight of the deprived retirees, but his efforts appear inadequate.

The state’s deputy governor, Benedict Alabi in a recent interview with PREMIUM TIMES said “the problem is that when you have arrears, you can’t pay it in a single day. The government is not only to pay salaries of workers and pensioners alone, we are to take care of the welfare of our people.”

“Salary is there, security is there, health is part of it, and also economy development is part of the Mandate of the government. We are balancing all these but we know that salary is important and pension payment is important. We started from somewhere and we’ve been following through. It isn’t being selective.”

Meanwhile, speaking on behalf of the Ooni at the palace, the Laadin of Ife – a High Chief – Kayode Awofiranye, said, “I sympathise with you (protesters) and I promise that your message will be delivered to His Imperial Majesty, Oba Adeyeye Ogunwusi for prompt communication with the state government.

“It is so bad to hear that you are going through several hardships as a result of the non-payment of your entitlements, Kabiyesi is aware of your presence here and I want to assure you that necessary actions will be taken to effect the prompt payment of your rightful monies.”