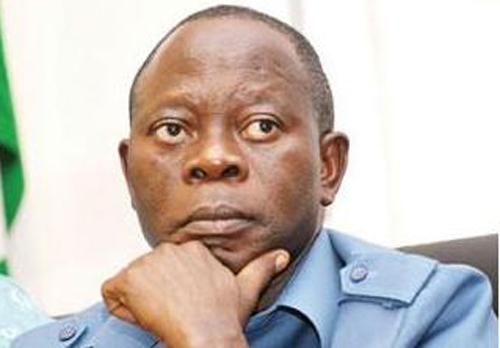 The Court of Appeal has upheld the suspension of Adams Oshiomhole as the National Chairman of the All Progressives Congress (APC).

Mr Oshiomhole was suspended by the APC in Edo State in what is part of his battle with the state governor, Godwin Obaseki.

An Abuja high court, in March, also ruled that his suspension was legal and ordered Mr Oshiomhole to stop parading himself as APC national chairman.

The suspension was initially lifted after the appellate court granted a stay of execution of the high court’s order.

The appeal court, on Tuesday, however, ruled that Mr Oshiomhole’s suspension was valid.

This throws a new twist into the Edo APC crisis as the party prepares for the governorship election.

Earlier on Tuesday, Mr Obaseki announced his resignation from the APC, a decision that further ehoes the current state of the party in the state.

In a unanimous judgment on the first appeal delivered by Justice Eunice Onyemanam, the court held that the trial court had territorial jurisdiction to have entertained the suit as it did.

The court also withdrew Mr Oshiomhole’s rights and privileges as national chairman of the party including his security details.

The appeal court predicated its decision on the ground that Mr Oshiomhole as the first appellant is based in Abuja while the APC also had its national headquarters in Abuja.

In the judgment in the second appeal delivered by Justice Mohammed Lamido, the court held that there was no basis for the two appellants to hold that they were denied fair hearing during proceedings at the trial court.

“The identity of those who suspended Oshiomhole was not in doubt because in there unchallenged affidavit they made it clear that they were party members and officers of the party, therefore the appeal lacks merit,” the court held.

In the two dismissed appeals, Mr Oshiomhole and the APC were the appellants.

On March 4, Danlami Senchi, a judge of the FCT High Court in Abuja, ordered the suspension of Mr Oshiomhole as national chairman pending the determination of a suit filed by one Oluwale Afolabi.

Mr Senchi said it was wrong of the APC to have kept Mr Oshiomhole as chairman after he was suspended by the Edo chapter of the party.

But Mr Oshiomhole approached the court of appeal seeking a stay of execution of the judgement.

The feud between the embattled Edo State governor and his mentor-turned-rival has been on for more than a year with different twists and turns.

As envisaged, but in an alleged payback slot, the embattled governor was controversially disqualified alongside two other aspirants by the party’s screening committee based on discrepancies noticed in their submitted credentials on Friday.

“Since he (Oshiomhole) is the judge and the jury in this matter… I do not believe that I will get justice because Comrade Adams Oshiomhole is an interested party in the Edo process,” Mr Obaseki had told journalists barely 24 hour before his disqualification was announced.

While Mr Oshiomhole insisted that the committee has been fair in its judgement, many have accused him of being behind the suspension.

Mr Buhari has been silent on the Edo governor’s ‘plight’ even after the latter visited him in Abuja.

This was followed by Mr Obaseki’s suspicious visits to a couple of governors from the main opposition party, PDP, in a bid to fly the party’s ticket in Edo state.

Despite the affirmation of Mr Oshiomhole’s suspension by the court, the fate of Mr Obaseki is much in the wind.

Whether he would return to the APC as a result of this latest court injunction or forge ahead in his new alliance with the PDP for the ticket is uncertain.

Meanwhile, the Edo State branch of the PDP has maintained its stance of no automatic governorship ticket for the governor even if he joins with his supporters.

“I can confirm to you that the governor, his deputy and the entire APC structure in the state will be joining PDP soon.

“However, I am not yet aware that the governor has obtained our party’s membership card. I can also say that there is no automatic ticket in the offing for him at all,” the Chairman of the PDP in Edo, Tony Aziegbemi, said on Monday.

The party had slated June 22 for its direct mode of primary in the state while Nigeria’s electoral body, INEC, had fixed September 19 for the Edo 2020 governorship election.

UP-CLOSE: The 10 passengers on Naira Marley’s controversial flight to Abuja