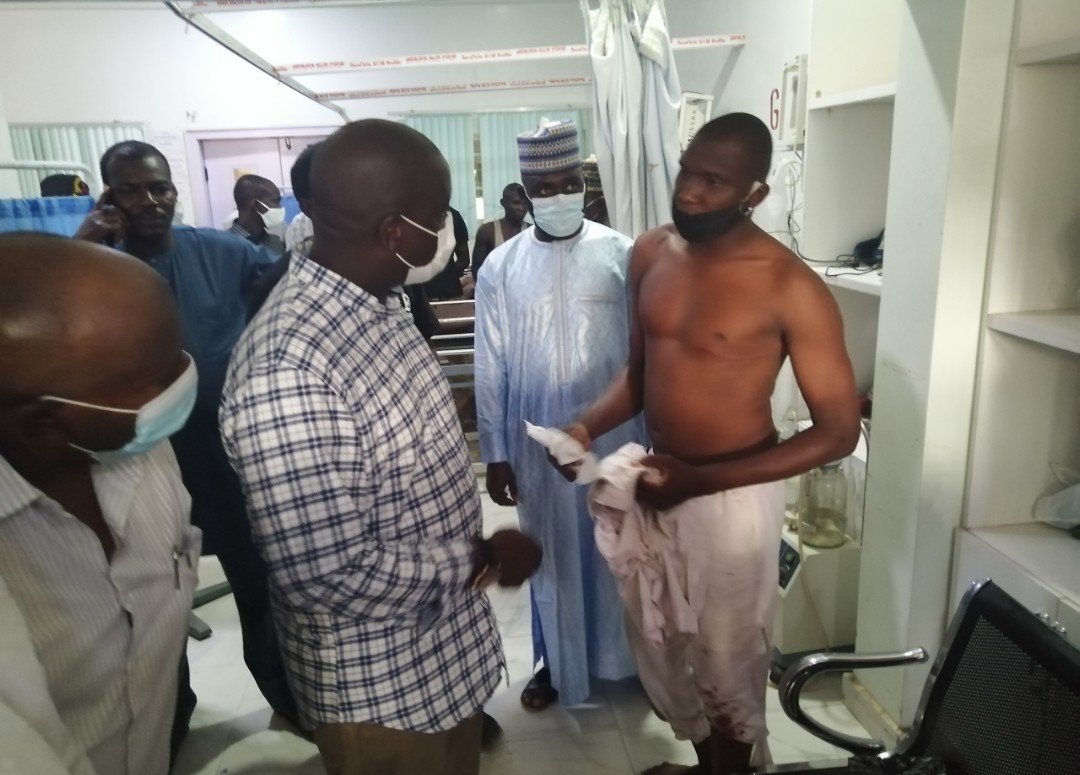 Attacked officials of the COVID-19 Committee in Borno State

At least one person has been confirmed dead and many others injured after Nigerian soldiers attacked officials of the COVID-19 Committee in Borno State.

The soldiers, disregarding ongoing interstate travel ban, forced their way through the entrance gate to Borno and allowed hundreds of illegal travelers into the town.

The armed personnel, who arrived in three gun trucks, allegedly threatened to open fire on the COVID-19 Committee members led by the state attorney general and a commissioner of health.

While breaking through the barricade, the soldiers rammed through a patrol truck of the State Rapid Response Squad which forced the vehicle somersaulting in the bush. All local security personnel in the vehicle sustained injuries.

The driver of the RRS truck died hours later at the Borno Specialist Hospital.

The soldiers also knocked down some commercial tricycles (Keke Napep). Three women, including a pregnant woman and a baby, sustained fractures.

While allowing hundreds of travellers into the state in violation of the restriction order, the soldiers also assaulted a photojournalist attached to the committee while he was filming the vehicles streaming into the city.

The Borno government imposed a restriction of interstate travel in May. Only persons on essential duties or with the issued pass are allowed into the state.

The COVID-19 Committee has also ruled that violators of the interstate travel restriction would be detained in a quarantine facility for 14 days.

“We were assaulted today and it is quite unfortunate that it is a federal government law enforcement agency that is responsible,” said Kaka Shehu, the attorney general of Borno.

“We are carrying out a federal government order on restriction on interstate movement
and soldiers in three gun trucks decided to violate that by forcefully leading passengers into the city.

“They did not only break through the barricades but also assaulted us as a committee. They beat up our cameraman, seized his camera, and attempted to beat up some of the policemen in our committee.

“We did our best to calm the policemen, while I tried to confront one of the soldiers to remind him of the consequences of their action. But to my greatest surprise, the soldier looked at me and told me he doesn’t care about our ‘useless democracy’.”

The attorney general said the rampaging troops who were apparently enjoying cheers from the civilians allowed to enter the city, “threatened to deal with anyone who would stand on their way.”

The state deputy governor, Umar Kadafur, who chairs the COVID-19 Committee, arrived at the scene of the faceoff and called the garrison commander to meet him at the scene.

Mr Kadafur also ordered the return of the seized video camera while condemning the action of the soldiers.

The garrison commander who apologised for the action of the soldiers said the perpetrators have been identified and would face disciplinary action.

The garrison commander also said that the officer commanding the soldiers that violated the restriction order said they acted based on the fact that incoming travellers that were trying to escape the committee had gathered at a location, and the soldiers were worried that they could come under attack by Boko Haram insurgents. Hence they led them into the state.

Speaking to journalists at the scene of the clash, the deputy governor said, “this is highly condemnable and should not be allowed to repeat itself again.”

“We have conferred with the garrison commander and made it clear to him that we won’t allow any soldier to undermine our authority and the orders of Mr President. Hence we will pursue the case to its logical conclusion until we see that those soldiers face disciplinary action.

“However, we as a committee, and government, appreciate the sacrifices of the Nigerian military and we will do everything to support them, but we will not tolerate discipline in our state.”

The COVID-19 Committee, led by the deputy governor, later visited the Specialist Hospital where persons injured as a result of the soldiers’ actions we’re receiving treatment.

PREMIUM TIMES reporter saw some of the victims, including the pregnant woman and the toddler with his mother who all sustained fractures on their legs and arm.

The deceased driver of the RRS vehicle was still alive at the time the deputy governor visited. He died minutes after the committee had left the hospital.

Confirming the development, the state commissioner of health said “We have just received a report from the hospital that the injured driver had passed away.”

“This is very sad that all this happened because some soldiers chose to break the law. We are doing our best to stem down the spread of the pandemic, that’s why we are enforcing the ban on interstate travel,” he said.

“The cases of COVID-19 are on the rise and most of the new cases are from the travel violators whose blood sample we too while they are in the quarantine facility.”

Borno had recorded its highest case of COVID-19 on Friday when NCDC returned 42 new cases, which brings the total confirmed COVID-19 cases in the state to 423.