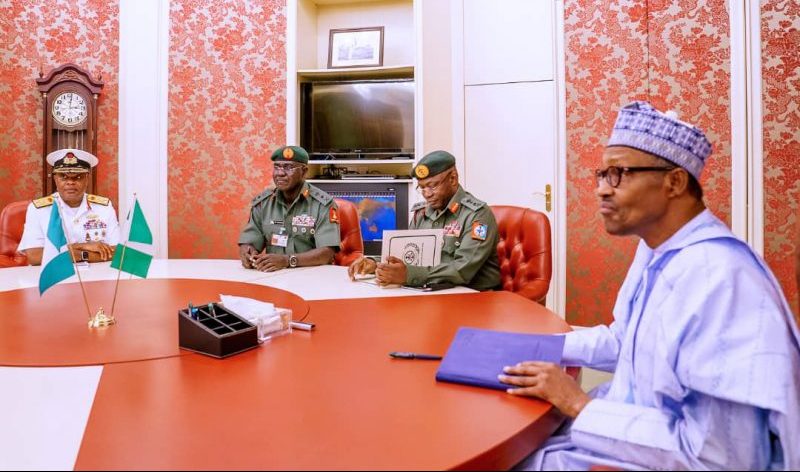 Among Nigeria’s national honourees in 2012 was an army officer, Mohammed Suleiman, then a colonel. He had earlier that year helped foil a Boko Haram terrorist attack on Aso Rock Villa in what is now home to President Muhammadu Buhari, having “discovered and penetrated” the cell tasked to carry out what would have been a major blow to Nigeria.

The key planner of that foiled act of terrorism on what is today home to President Buhari was a police sergeant, identified as Babagana, according to army records seen by PREMIUM TIMES.

Mr Suleiman was so key to Nigeria’s counter-terrorism efforts that his deployments for services abroad, for instance in Darfur and Washington, were repeatedly cancelled and, in another case, he was recalled from Command and Staff College, Jaji, as directing staff, to help track a globally wanted terrorist, Adam Kambar.

He initiated the creation of the Civilian Joint Task Force (CJTF) and controlled their activities in Borno State, before collaborating with 3rd Division of the Army to have Civilian JTF in Adamawa State. He was key to the “arrest of and appropriate provision of information on the first successfully prosecuted Boko Haram pioneer spokesman, Umar Sanda Kodunga.”

Even before Boko Haram gained notoriety and when they were covertly building a base in Bauchi, he was responsible for “discovering, penetrating and profiling” the group. In 2009, he led the joint army/police team that cleared and arrested “377 terrorists with scores killed with no casualty to own troops.”

All these about Mr Suleiman were documented in his official service records with the Nigerian Army. However, for four years, he has been up in a legal battle with the military after he and 37 other senior officers were forcibly and illegally removed from service shortly after Mr Buhari assumed office.

In separate judgements, Mr Suleiman and five of the affected officers have won the cases they initiated to challenge their forced retirement by the military. In ordering their reinstatement, the National Industrial Court has six times held that the military acted unlawfully. PREMIUM TIMES   has repeatedly called the attention of the Buhari government to this matter. But authorities have continued to ignore the court and its decisions.

This matter is one of Nigeria’s worst cases of arbitrariness, disregard for the court and shabby treatment of her heroes since Mr Buhari, a former brigadier general, became president.

One of the officers, Ojebo Ochankpa, died in 2017 while awaiting justice. Their statutory appeal for redress to President Buhari within 30 days of their sack, and other letters subsequently, have neither been acknowledged nor replied to.

On June 9, 2016, each of the 38 officers woke up to sudden letters of retirement in their emails. They had been compulsorily retired from service.

“It was absolutely unexpected as I had not gone through any disciplinary process,” said Abdulfatai Mohammed, then a Lt. Colonel, and one of the 38 affected officers. “I was never queried, nor was there any indictment.”

In the letters, seen by PREMIUM TIMES, to the affected officers, their compulsory retirement was hinged on “provisions of Paragraph 09.02c (4) of the Harmonised Terms and Conditions of Service for Officers 2012 (Revised)”.

The referenced section – 09.02c (4) – of the Harmonised Terms and Conditions of Service for Officers 2012 (Revised), shows the officers were laid off “on disciplinary grounds i.e. serious offence(s)”.

Emphasizing “service exigencies” and that the “military must remain apolitical and professional at all times,” then army spokesperson, Sani Usman, now a retired brigadier-general, on June 10, 2016, released a statement, disclosing what could have constituted the “serious offences” that warranted the compulsory retirement of the 38 officers.

“It should be recalled that not too long ago some officers were investigated for being partisan during the 2015 general elections,” the statement read. “Similarly, the investigation by the Presidential Committee investigating Defence Contracts revealed a lot. Some officers have already been arraigned in court by the Economic and Financial Crimes Commission (EFCC).”

However, contrary to the claim by the army, our investigations showed that only a few of the affected officers were queried, tried and indicted.

Others, like Mr Suleiman and Mr Mohammed, had their careers abruptly cut short for reasons that smacked of high-level arbitrariness, pettiness, witch-hunting and partisanship by authorities of the Army.

While officers cleared by either arms procurement panel or election panel were retired, others who were not questioned at all were also sent away.

Highly placed sources in the army told PREMIUM TIMES that of the major generals affected, only one – E.D. Atewe (N/7674) – faced a panel and was indicted. Mr Atewe was indicted by the presidential arms probe panel, and he is currently being prosecuted by the Economic and Financial Crimes Commission.

Although S.D. Aliyu (N/7711); M.Y. Aliyu (N/8114) GOC 7 Division; Fatai Alli, (N/7914) a former Director of Operations in the Army, also faced the presidential arms panel, they were cleared. Yet they were laid off for “serious offence”, the army claimed.

The cases of the affected brigadier generals were not different. The 11 of them were simply retired because they were suspected to be have failed to help the Buhari regime to power in 2015.

For instance, two officers were laid off because of their ties to the former National Security Adviser, Sambo Dasuki, our sources said.

The two officers – A.S.H. Sa’ad (N/8392), who was at the Directorate of Military Intelligence; and Mormoni Bashir (N/8396), former principal staff officer to Mr Dasuki – were retired without indictment. Although, Mr. Sa’ad faced a panel, he was not found to have engaged in any wrongdoing.

For his alleged close ties to a former Army Chief, Kenneth Minimah, D. Abdulsalam (N/9169) was sent away. Anthony Onibasa was pursuing a doctorate at the University of Calabar when he was notified of his sudden retirement. He was neither queried nor indicted.

Koko Essien (N/8794), a former Brigade Commander, 2 Brigade, Port Harcourt, faced the election panel but was cleared. Mr Essien was laid off nonetheless. Just like Bright Fibioinumana (N/8399); L.N. Bello (N/8799), former Brigade Commander, 34 Brigade Owerri; and M.G. Alli Moundhey, former Director, Campaign Planning in the North East Operations, who were even not queried not to talk of being indicted.

Although the Nigerian Army said the affected officers were retired for either involvement in the 2015 general elections or arms procurement fraud, our investigations showed that officers who were not in Nigeria at the time of the elections were also sacked.

That was the case of I.B. Lawson (N/8812) and G.O. Agachi (N/9363) who were defence attaches at Nigeria’s missions in China and Benin Republic respectively.

“They aided PDP to get votes”

Many Colonels and Lieutenant Colonels who were laid off on this day four years ago were merely suspected of failing to cooperate with the All Progressives Congress to garner votes for candidate Buhari in the 2015 elections, sources told PREMIUM TIMES.

In one instance, T.A Williams (N/11469) a Major; and Abdulfatai Mohammed (N/10659), a Lieutenant Colonel, both attached to the 195 Battalion, Agenebode, Edo State, with the latter as Commanding Officer, were said to have been flushed out because of complaint of not cooperating with Mr Buhari’s APC, brought against them.

But according to documents seen by this newspaper, Mr Mohammed was away in the North East at the time fighting Boko Haram, not at Agenebode. But somehow his name was among those listed for alleged partisanship.

Our findings revealed that these officers, accused of partisanship, were not queried or investigated before they were forced out of the army. The former Commanding Officer, 93 Battalion, Takum, O.C. Egemole (N/10423), who was also compulsorily retired, was also accused of “not doing enough” to avert APC loss in Taraba State. He was also neither queried nor investigated.

Seven colonels, including Mr Suleiman (who had helped foiled Boko Haram attack on President Buhari’s Aso Rock home) who were compulsorily retired, had no query issued to them nor were they made to face any panel before they were fired.

For instance O.U. Nwankwo (N/9678) was studying at the University of Ibadan at the time of his ouster.

Also, without probe or indictment for any offence, T. Minimah (N/10185), brother to former Army Chief, Kenneth Minimah, was also removed from his post in Benin and retired.

PREMIUM TIMES checks indicate the army violated its own rules in the ways the officers were disengaged.

The Harmonized Terms and Conditions of Service for Officers whose paragraph 09.02c (4) was relied upon to remove the officers, originates from the Armed Forces Act. The section cited by the Army provides that an officer may be compulsorily retired “on disciplinary grounds i.e. serious offence(s)” without defining what constitutes “serious offences”.

But the principal law – the Armed Forces Act – establishes all actions that constitute offences in the Military. The Act prescribes steps to be taken in punishing offences, and a review shows no section empowers the Army Council to arbitrarily punish or compulsorily retire officers for any offence. In fact, the Army Council, in Section 11(a-f) of the Act, has no power to retire any officer on disciplinary ground without compliance with the steps prescribed by law.

In line with Paragraph 09.02(e) of the Harmonised Terms and Conditions of Service for Officers, many of the affected officers, including Mr Mohammed and Mr Suleiman, petitioned Mr Buhari within 30 days of their sack for administrative review.

“I want to respectfully state that I was not in any way involved in any of the two issues stated as reasons for compulsory retirement of 38 officers of which I was among,” Mr Mohammed, wrote in his appeal.” I was never investigated at any time and have not committed any serious offence.”This was the ground of appeal of his colleagues, who also petitioned Mr Buhari.

They also subsequently separately wrote the president and once asked him to prove his integrity. None of the letters was acknowledged or replied to by President Buhari or his appointees. But it is alleged that the Chief of Defence Staff, Gabriel Olonisakin, who has the lawful responsibility to transmit the officers’ petitions to the president is blocking the appeals. He has refused to show evidence of transmitting the petitions to the industrial court and he now risks a jail term for that.

Apart from petitioning Mr Buhari as required by law, many of the officers also approached the industrial court for justice. Six of them have now gotten favourable judgements with judges faulting the military.

Apart from Mr Mohammed and Mr Suleiman, four others, namely Mr Ijeoma, a Maj. General; Danladi Hassan, a colonel; Thomas Arigbe, a Colonel; and DB Danzang have also got judgements ordering the army to reinstate them. There has not been compliance, nor have the authorities appealed yet.

Both the defence spokesperson, John Enenche, a Maj. General, and army spokesperson, Sagir Musa, Colonel, did not reply messages seeking comments for this report. They also did not answer calls to their telephones.

But in the wake of the defeat the army suffered in the case of Mr Mohammed in January, Mr Musa had said, “It is a legal matter,” and declined further comment when contacted by PREMIUM TIMES.

EDITOR’S NOTE: An earlier version of this report suggested that Brigadier General Anthony Onibasa was indicted for an offence before he was retired. That was incorrect. It was an editing error that has since been corrected.