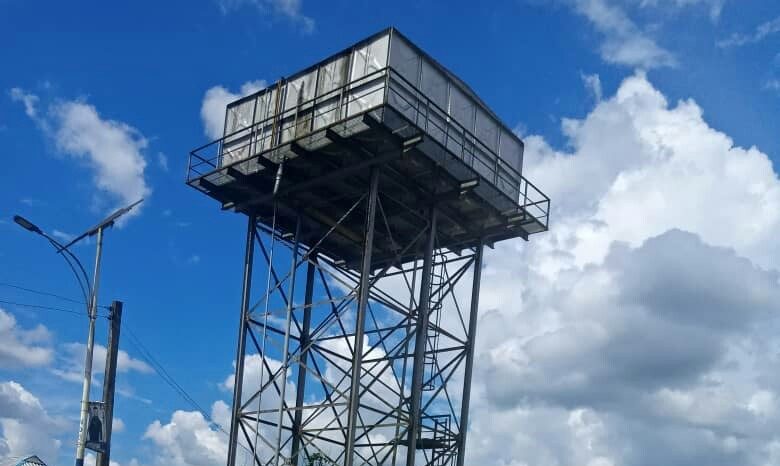 (This is the second part in a series on the NDDC water projects in Delta State. The investigation revealed that seven projects listed as ‘completed’ were not executed, five were abandoned, five were completed and still in use, while three were completed but are no longer functional. Read the first part here).

Her first stopover was Okuno Community.

On February 11, 2011, the NDDC awarded the contract for the construction a solar-powered water project in Okuno community to Philvianno Nig Ltd.

The commission’s official records show that the project is ongoing.

However, our findings show that the borehole was abandoned and overgrown with weeds.

“This borehole has been this way for more than five years now,” Agorson Sunny, a community leader, said angrily.

“We never drank a cup of water from this borehole. You see how they condemned this land?” he queried.

According to Mr Sunny, the community was looking forward to enjoying potable water.

“We have been drinking water from the well for so long,” he said. “We were eagerly waiting for them to finish the borehole.”

But, when the project was near completion, the contractor disappeared without a trace.

“They mounted the borehole and tested it. Immediately it brought out water, they carried their property and left. They did not come back again,” Mr Sunny said, bitterly.

There are two other boreholes in the community. But, both have not functioned in years.

“All they know is how to waste people’s lands. They start and never finish the borehole,” Mr Sunny said, visibly livid. “Tomorrow, they will ask for another land to render useless (project).”

A CAC search revealed that Philvianno Nigeria Limited, the company that was awarded the contract, is located at NO 18, Rumueprikom by Wimpey junction in Port Harcourt, Rivers State.

But, upon visit, the reporter met Blosom Choice, a boutique occupying the address.

Officials at the boutique said they had never heard of such a company.

When asked about the directors of the company— Gbagi Felix Chuks, Gbagi Michael Emeka and Gbagi Francis Onyeka – residents and business owners in the area said they had never heard such names.

In Erovie, Fully paid for but never worked

Erovie quarters, Ozoro, houses two solar-powered boreholes, while Oramudu Ozoro has one borehole — all courtesy of the NDDC. But, the three projects are abandoned and never worked.

On May 28, 2012, Fripengo Dredging Nig Ltd secured the contract from the NDDC, to construct a solar-powered borehole at Erovie quarters, Ozoro.

Records provided by the NDDC show that the project has been completed and fully paid for.

But upon visit, the reporter gathered that the borehole has been abandoned for long time, and it never provided water.

“It’s more than three years since NDDC constructed the borehole. But, it has not worked for once,” said Wisdom Omoghene, the Chairman of the Town Planning Committee in the community.

Christopher Oweh, a motorcyclist who resides in the community, said getting water especially during dry season is his greatest concern.

“We walk far to get water, beg and most times we don’t get because those we beg are even managing the water they have,” Mr Oweh, said. “We have two wells but during dry season the owners don’t allow us fetch water from it.”

According to Mr Omoghene, there are few private boreholes in the community and the owners have been helpful.

“They pump water and allow people to fetch for free. But, they have stopped,” the chairman said. “The electricity company gives us light once in a while. So, we have to buy fuel to pump water.”

Since the power supply in the community became irregular, Mr Oweh said, the private borehole owners have formed the habit of pumping water at midnight.

“They don’t want us to beg them water, and I don’t blame them,” he said. “I blame those that have refused to give us light because if there’s light, our neighbours will give us water.”

To find out why the project was abandoned, PTCIJ in March visited Fripengo Dredging Nig Ltd, the contractor of the project.

Arriving at the company address at NO 43 Kpakani Street, Rumuigbo in Port Harcourt, the reporter met the wife of the contractor, who introduced herself simply as Mrs Ukwosah.

“The project has been completed and commissioned,” Mrs Ukwosah, said. “But, my husband is not around to answer all your questions.”

When contacted on telephone, Ngozi Ukwosah, the husband, also said the project was done and commissioned.

“I did not abandon anything. Even after the project was commissioned, I was paid almost two years after,” he said.

When this reporter told him she had visited the project site and residents said the borehole never worked, as well as requested for the project documents, the contractor hung up.

Subsequent calls to Mr Ukwosah were not answered.

The second borehole in Erovie quarters Ozoro was contracted to Racen Integrated global Limited on May 28, 2012.

The tall grass around the structure was a clear indication that the borehole has been abandoned for years.

“It’s about the same time the other project was constructed,” the community leader, Mr Omoghene, said. “It’s annoying. We have two boreholes here but they haven’t worked for a minute.”

Another solar-powered water project commissioned by the NDDC was also abandoned in Oramudu Ozoro.

Details provided by the commission show that the project was awarded to Citilight Integrated Services Limited on May 31, 2012.

According to NDDC’s 2016 appropriation act, N40,000,000 million was earmarked for solar-powered borehole in Oramudu Quarters, Ozoro.

Efforts to reach the contractors of these projects were unsuccessful as the companies’ Registration Certificate (RC) numbers could not be traced and their files could not be found at the CAC.

In Emevor, a community in Isoko North Local Government Area, the story was not different.

The contract for the construction of a solar-powered water supply scheme at Emevor town was awarded to El-Fegor Nig Limited on May 28, 2012, according to NDDC’s records.

In 2015, the NDDC approved N10 million for the construction of solar-powered boreholes in Emevor out of a budget cost of N178 million and in 2016, N10 million was approved, according to the commission’s 2016 appropriation act.

NDDC’s records show that the project is ongoing and the approved sums released.

Upon arrival, the reporter met two rusty structures with no water tanks on them. The sites were overgrown with weeds. Beside one of the projects is the signboard indicating that El-Fegor Nig Limited is in-charge of the project.

“The company started the projects in 2015 and abandoned them in 2016,” said Otobo Abisi Odiri, chairman of the community, during a tour.

According to the chairman, water has been a huge challenge in the community.

“We don’t even have water. I pump water from my borehole for the community to fetch,” Mr Odiri, said.

When the chairman does not have enough to share, everyone turns to the only well in the community.

“Chairman is trying but he does not give us water every time. So, we go to one small well a bit far from here to fetch water,” said Ambrose Igbakporo, a resident of the community. “Other wells have collapsed.”

PTCIJ earlier this year reached out to Elliot Ugbome, the owner of El-Fegor Nig Limited, the contractor of the water project, to know what went wrong.

“There’s no money. The mobilisation that was paid to me was expended on that project. I even added my money,” said Mr Ugbome.

“I’ve put in payment since 2014. They have disbursed N26 million APG (Advance Payment Guarantee) and the APG was guaranteed by Unity Bank. NDDC wrote Unity Bank that the money they guaranteed has been utilized so the bank is no longer liable,” he said.

According to documents obtained from the contractor, N51.2 million was disbursed for the project out of the N178 million needed.

“I was mobilised with 15 per cent when the project was awarded to me. I even spent beyond that 15 per cent. That was why we got at IPC of N51 million after deducting the mobilization that was paid to me,” he explained. “The actual IPC was supposed to be N80 something million. But, they now debited the IPC. That was why they now wrote to the bank that this contractor has exhausted the mobilisation that the bank guaranteed so the bank is no longer liable.”

Continuing, he added: “The only thing left for that project to be completed is the tank and the solar panel. If I’m paid, that job would be completed in two weeks. If IPC was raised in 2014, till today and they have not paid, how do you expect the contractor to go to work? You see? The commission is at fault. Let them pay me so I can complete the job.”

Mr Ugbome’s explanation highlights that in some cases, the projects were abandoned, not necessarily due to corruption, but because the NDDC failed to adequately pay the contractors. Unfortunately, this information is not available to residents of such communities. Cases like this are separate from those were monies are released for non-existent or abandoned projects.

The contract to construct a customized surface water filtration system in Ajatitor was awarded to FOH & FOH on April 11, 2003, according to details provided by the NDDC and the signpost at the site.

But, the project was abandoned and the site, overgrown with thick weeds.

According to NDDC’s 2016 appropriation act, N95 million was earmarked for the construction of a customized surface filtration system at Ajatitor.

“This project has been like this for years,” said Obriki Nathaniel, vice chairman, Ajatitor community. “It hasn’t been easy for our people. Many of them get water from the well.”

CAC search reveals that FOH & FOH Limited, the company that secured the contract, is located at No 10 Ajibola Aluko Street, Okota in Isolo area of Lagos State.

But, when this reporter visited, the address was occupied by a mini retail store whose officials said they knew nothing about the firm called FOH & FOH Limited.

Attempts to speak with the directors of the company — Foh Patrick, Foh Tamarakuro, Foh Opie and Foh Bena – were futile, as they could not be traced.

When contacted for comments, Charles Odili, the spokesperson for the NDDC, preferred to attack PREMIUM TIMES for its series of reports on the NDDC projects in the Niger Delta.

This reporter tried to explain that this report was a series to review completed, uncompleted and non-existent but funded projects, but Mr Odili would have none of that.

“I’ve had to talk to a lot of your colleagues. It’s always about the not-completed. The things that are completed and standing well, no one is reporting them. Your reports are negative towards the commission and that’s not fair,” he said.

He declined further comments saying he was in a meeting. He refused to say when he could be contacted again.

Subsequent calls to his phone several hours later were unanswered.

After unsuccessful attempts, this reporter sent a message to his line, requesting to know what NDDC is doing about the abandoned water projects in Delta State.

She also mentioned some of the projects listed as completed by the commission that were not executed.

“Plans are afoot to completing all abandoned water and indeed, other projects. Paucity of funding has been central to this state,” he wrote.

(Editor’s Note: Read the first of this three-part investigation here).

We’ve pulled out from peace agreement with bandits – Katsina Governor