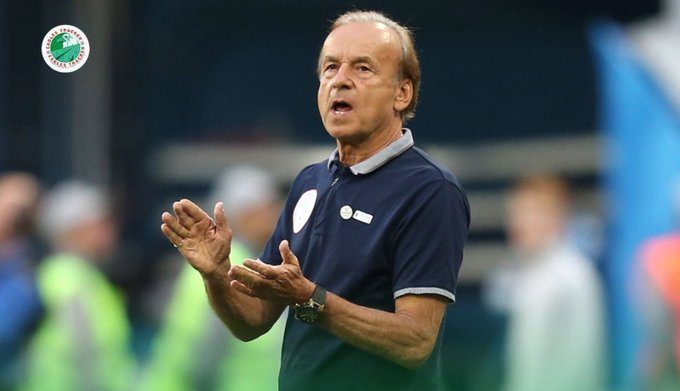 The Nigeria Football Federation President, Amaju Pinnick, has officially confirmed that a new deal has been reached with Gernot Rohr to continue as the Super Eagles coach.

While announcing the development on his verified Twitter handle on Wednesday, the NFF boss also added that qualifying for the World Cup and winning the Nations Cup are two sacrosanct expectations Rohr is fully aware of.

Pinnick wrote: “I’m happy to announce that the NFF and Coach Gernot Rohr have concluded all contractual discussions and he will stay on as Coach of the Super Eagles.

“We have always had confidence in his abilities and we are confident that the national team can only go higher from here.”

I'm happy to announce that the @thenff and Coach Gernot Rohr have concluded all contractual discussions and he will stay on as Coach of the Super Eagles. We have always had confidence in his abilities and we are confident that the national team can only go higher from here.

He continued: “We can now focus on qualifying for the World Cup and winning the Nations Cup. In truth, these are sacrosanct and Coach Rohr is aware of these conditions.

“Like the Honourable Minister of Youth and Sports Development has rightly noted; we are uncompromising in these goals.

Rohr has been in charge of the Super Eagles since 2016 but he is yet to win any silverware.

The German tactician qualified Nigeria for the Russia 2018 World Cup but the Super Eagles did not go beyond the first round; a development which was partly blamed on Rohr’s misjudgments in the crucial final group game against Argentina.

At the AFCON tournament in Egypt, the Super Eagles settled for Bronze having been denied a place in the final by eventual champions Algeria.

The Super Eagles are three-time African champion having won the continental title first on home soil in 1980 and then 24 years later in Tunisia before emerging tops again in South Africa in 2013 under the tutelage of late Stephen Keshi.

Rohr has now been handed a new two-and-half-year deal in which his past mistakes can be corrected.

To retain his position with the Super Eagles, Rohr among other things had to agree to a pay-cut, to be paid in Naira and also reside in Nigeria.

Several coaches including ex-Valencia manager Hector Cuper and former Tottenham Hostpur boss, Harry Redknapp, were reportedly waiting in the wings in the event Rohr failed to agree to a new deal with the NFF.

The next AFCON is scheduled to hold in Cameroon, in January 2021 but could be postponed due to the coronavirus pandemic.

Obaseki to Oshiomhole: APC will pick governorship candidate in Edo, not Abuja