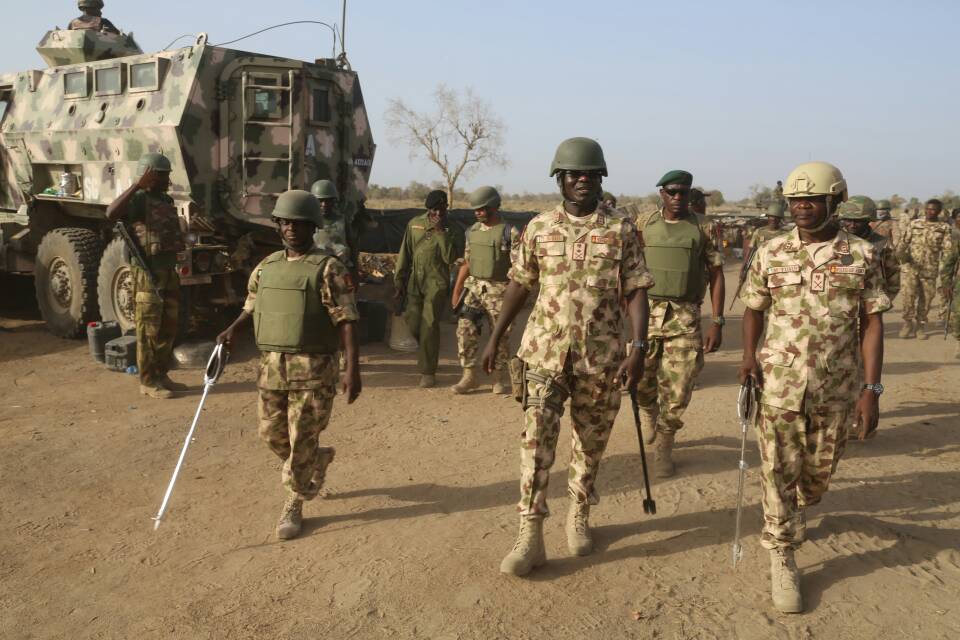 Tukur Buratai and the troops.

The Nigerian Army is secretly trying a soldier, Mohammed Abdullahi, for making ‘unguarded comments’ on social media about the tenures of the current service chiefs, a military source has revealed.

The staff sergeant, according to the source, was accused of critising the extension of the tenures of the service chiefs, saying it is “slowing morale in the rank and file of the forces.”

The Army Intelligence Corp (NAIC) has investigated the soldier’s comments and its findings will form the basis of the trial, the official briefed on the case told PREMIUM TIMES.

The source informed PREMIUM TIMES that the investigation of the soldier was authorised by Mr Buratai in February this year.

The soldier is being accused of flouting the Nigerian military’s 2018 policy on the use of social media, which prohibits certain conducts by military personnel on social media, the source added.

Many soldiers have reportedly been punished under that policy in the past.

When contacted about the matter, spokesperson of the Nigeria Army, Sagir Musa, said he was not aware of the matter and could not comment on it until he saw the document PREMIUM TIMES referenced.

“I’m not aware of this! But if you have any document or evidence indicating there is such development kindly forward it to me to facilitate or assist in finding out so that I can brief you accordingly,” he said.

PREMIUM TIMES has seen part of a document that referenced Mr Abdullahi’s social media comment on tenures of service chief and the NAIC investigation that was authorised by the COAS.

The referenced document sighted by PREMIUM TIMES is not being made public, because doing so could reveal the identity of the source.

The soldier’s post reportedly criticised the continued stay in office of the service chiefs.

The current service chiefs are the longest-serving set since the return of democracy in Nigeria in 1999. This has angered many who believe such top officers should not spend more than two years, or at most four in office.

President Muhammadu Buhari appointed them on July 13, 2015, with the general expectations that their tenures would end in two years or thereabouts.

It was expected by many that by then, most of them who were then nearing the end of their military careers would have retired. But that turned out not to be the case.

The Armed Forces of Nigeria’s Harmonised Terms and Conditions of Service (HTACOS) is clear about the tenures of the service chiefs and the prerogatives of the President and Commander in Chief in extending their tenures.

In 2017 when the current service chiefs’ two-years tenures expired, President Buhari exercised his powers as enshrined in the HTACOS, to extend their stay in office for another two years which was expected to finally expire by 2019.

Also, at the time President Buhari extended their tenures in 2017, some of the service chiefs had clocked their compulsory retirement age of 35 years in service.

Their continued stay has no doubt created ripples within the armed forces and the public as the military continues to battle an unending insurgency in the North-east and calls intensify that the officials be replaced.

Mr Abdullahi’s post reportedly highlighted how military personnel were being shortchanged as per progression in ranks.

The current Chief of Defence Staff, Mr Olonisakin, an army general, enrolled into the Nigerian Defence Academy (NDA) as a member of the 25th Regular Course, and was commissioned as a Second Lieutenant in 1981. This means he was supposed to have clocked 35 years of service in 2016.

The Chief of Naval Staff (CNS), Mr Ete-Ibas, got inducted into NDA as a member of the 26th Regular Course in June 1979 and got commissioned as a sub-lieutenant on January 1, 1983. He was to have retired from service in January 2018.

Chief of Air Staff (CAS), Mr Abubakar, an air marshall, enlisted into the Nigerian Air Force as a member of the Cadet Military Training Course (CMTC 5) in November 1979. He was supposed to have retired since 2014.

The Chief of Army Staff (COAS), Mr Buratai, a lieutenant general, was in NDA as a member of the 29th Regular Course in January 1981, and thereafter commissioned as a second lieutenant on December 17, 1983. By his years of service, he was meant to retire in December 2018.

The source said many military personnel have continued to lament the continued stay in office of these top soldiers, claiming it affects the career growth of younger officers.

The source, who requested for non-attribution for fear of being sanctioned, said the NAIC had concluded the investigation on Mr Abdullahi “who may be undergoing a military trial and subsequent disciplinary measures as recommended in the NAIC report.”

The source said the NAIC also recommended that stiffer measures be put in place to curb such actions of ‘misconduct’ from other officers in the future.

The source said all commanding officers across various army formations and divisions had, in early May, received a directive from the COAS as recommended by NAIC. PREMIUM TIMES is yet to authenticate this claim.