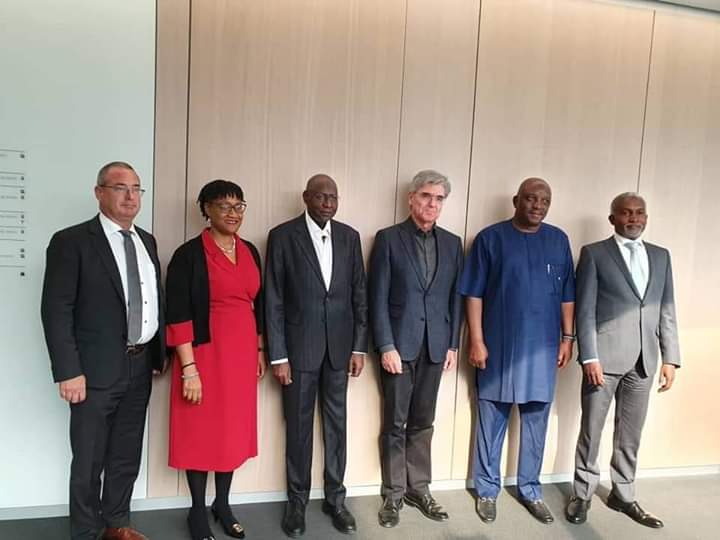 On Friday, April 17, Nigeria lost one of its most powerful men to the novel coronavirus disease as the death toll from the pandemic climbed to 17 in Africa’s most populous country. Abba Kyari, the ultra-powerful and controversial presidential aide, technocrat, journalist, administrator, banker and politician transited 25 days after testing positive for the virus.

Mr Kyari, who had an underlying medical condition and had sought treatments overseas in the past, was diagnosed with the disease on March 23. Six days later, on March 29, he released a personal statement saying he was leaving the political and administrative capital, Abuja, for the nation’s commercial hub, Lagos, for a continuation of his treatment.

In that March 29 statement, the late chief of staff said:

“I am writing to let you know that on medical advice, I will transfer to Lagos later today for additional tests and observation. This is a precautionary measure: I feel well, but last week, I tested positive for coronavirus, the pandemic that is sweeping the world. I have followed all the protocols government has announced to self-isolate and quarantine.

“I have made my own care arrangements to avoid further burdening the public health system, which faces so many pressures. Like many others that will test also positive, I have not experienced high fever or other symptoms associated with this new virus and have been working from home. I hope to be back at my desk very soon. I have a team of young, professional, knowledgeable and patriotic colleagues, whose dedication has been beyond the call of duty, who continue to work seven days a week, with no time of the day spared. We will continue to serve the President and people of Nigeria, as we have for the past five years.

“We should be calm, measured and diligent – be meticulous in your hygiene, especially with cleaning hands, if possible stay at home or keep your distance. Listen to good advice from the proper authorities: pay no heed to quack cures or fake news from social media. President Buhari will do whatever it takes to protect the health and safety of our people and get the country back on its feet as soon as possible.”

“Like the whole world, we are dealing with a new disease. Our experts are learning more all the time about coronavirus, what it does and how we can combat it. What we do know is that while some may become very sick, many others who contract the virus will not, and may have no symptoms at all. This is a disease that recognises no difference between north and south, men or women, rich or poor. We are all in this together.”

As it has now turned out, Mr Kyari did not return alive from that Lagos trip. He has now joined 16 other compatriots who have so far succumbed to the disease in Nigeria and 154,310 other people who have died around the world.

In that March 29 statement, before moving to Lagos, Mr Kyari did not say how he contracted the disease which has so far infected 493 people in Nigeria and 2,251,770 individuals globally (as of 7 a.m. Nigerian time on April 18).

But those close to the departed official said Mr Kyari contracted the disease during a one-week working visit to Germany March 7 to 14. Garba Shehu, the senior special assistant to President Muhammadu Buhari on media and publicity told PREMIUM TIMES that Mr Kyari, in company with the Minister of Power, Saleh Mamman, travelled to meet with officials of Siemens AG in pursuit of the deal Nigeria signed with the German energy company towards improving electricity supply in the country.

“Nigerians should note that that man died working without reservation for his country,” Mr Shehu said. “The German Chancellor, Angela Merkel facilitated the deal and President Buhari’s heart is deeply in that project. It was for that reason that Alhaji Kyari and the power minister were sent by the president to that European country for a follow-up meeting. Unfortunately, he caught the virus there, while working with other people to give Nigeria steady electricity.”

A close associate of the late presidential aide, who asked not to be named, added, “It is now that people will know what that man (Mr Kyari) did for this country. That man was committed to leaving a lasting legacy for Nigeria. He was the engine room of the administration. He was a committed and honest patriot who caught a deadly virus in the line of duty.”

Nigeria had on July 22, 2019, signed an Electricity Roadmap Agreement with Siemens for the generation and distribution of 11,000MW of electricity by 2023. The agreement followed a meeting President Buhari held with Chancellor Merkel on August 31, 2018. During the signing of the agreement, Mr Buhari recalled the efforts by previous administrations to fix the nation’s energy problem. He, however, expressed the hope that the opportunity from Germany through Siemens was a good one that could provide the needed solution.

“Now, we have an excellent opportunity to address this challenge,” the president said at the signing ceremony. “Our intention is to ensure that our cooperation is structured under a Government-to-Government framework. No middlemen will be involved so that we can achieve value-for-money for Nigerians. We also insist that all products be manufactured to high quality German and European standards and competitively priced.”

The President then appointed his chief of staff to lead the project execution process on the Nigerian side. Mr Kyari then held several meetings with parties involved in the project before and after the agreement was signed. It was a continuation of that task that took him to Germany in early March. There, he was struck by coronavirus, a condition from which he did not recover.

COVID-19: Nigerian League to be completed within eight weeks of resumption