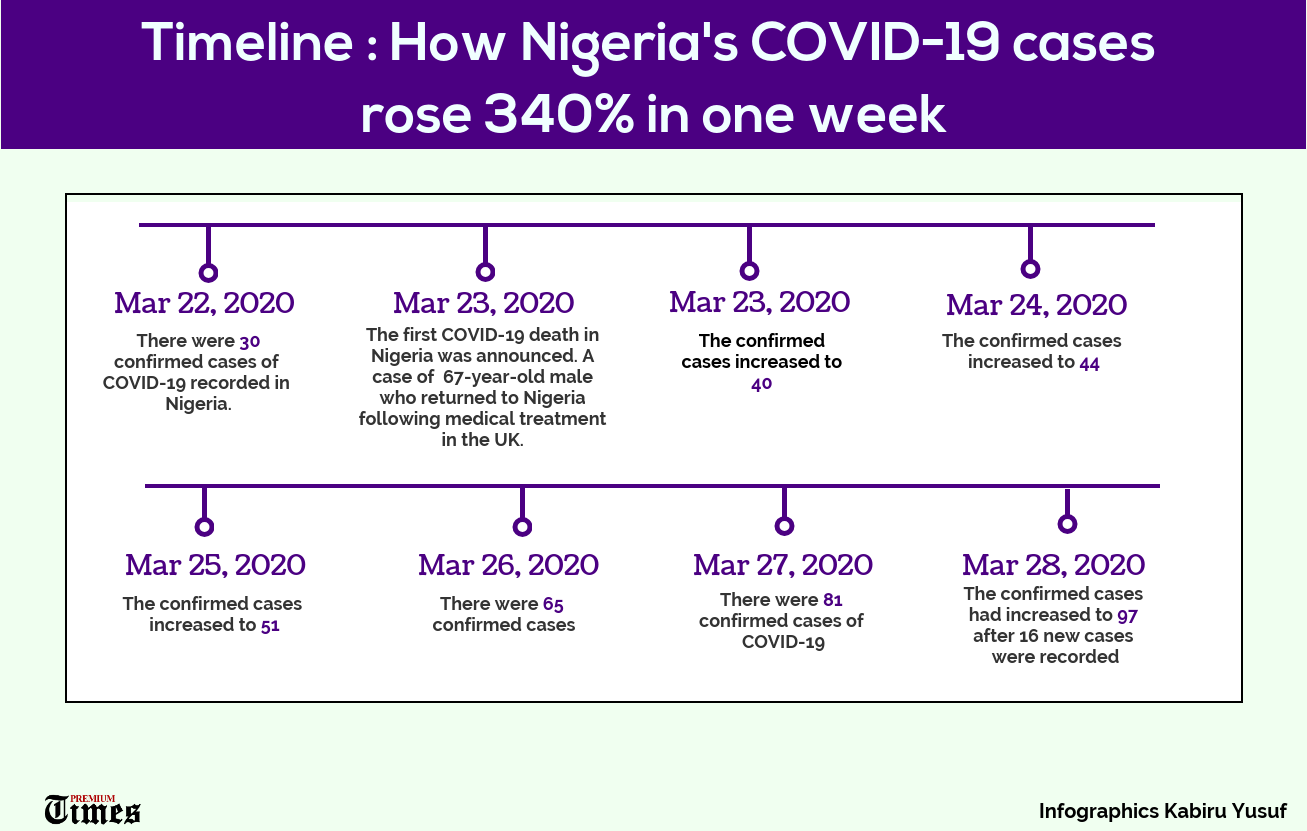 As Nigeria recorded its 97th COVID-19 case late on Saturday, a review of official data shows that the number of confirmed cases rose by 340 per cent in a week.

COVID-19 is a deadly respiratory disease caused by the coronavirus.

According to the latest breakdown by the Nigeria Centre for Disease Control (NCDC), Lagos State leads with 59 cases, followed by 16 in Abuja, Ogun – 3, Oyo – 7, Edo – 2, Bauchi – 2, Enugu – 2, Osun – 2 while Ekiti, Kaduna, Rivers and Benue states have one case of the infection each.

While one death has been recorded, at least three patients have so far been discharged after they fully recovered from the disease.

An analysis of the recorded cases this week, when compared with the previous week, revealed that an additional 75 persons tested positive this week.

This represents a 340.9 per cent increase, the highest weekly increase Nigeria has recorded since its index case on February 24.

The Lagos State Government has projected that the numbers of cases in the state might reach 39,000 if good social distancing was not adhered to by the public.

“Our Mathematical modelling shows that worst case scenario we might have 39,000 cases in Lagos State; however, if we practice good social distancing, we can limit that to about 13,000,” the Commissioner for Health, Akin Abayomi, said on Friday.

Mr Abayomi said combining social distancing with active constant tracing would help to reduce the cases further, noting that the figure was minimal compared to the numbers of cases in other parts of the world.

“The figures may seem alarming at this point, but this is just to emphasise the importance to the Lagos Community to follow the instructions of the Incidence Commander to ensure they practice good social distancing.

“Social distancing is the key to bring the outbreak under control, because that way, we are not giving the virus the opportunity to spread from person to person,” he said.

In this article, PREMIUM TIMES reviews the cases recorded this week and how the figure rose from 22 to 97.

As at 06:45 a.m. on March 22, there were 25 confirmed cases of COVID-19 recorded in Nigeria. Three new cases had been reported in Lagos State, in people who returned from high-risk countries.

Less than two hours later, the confirmed cases increased to 26 after one new case was confirmed in Oyo State. 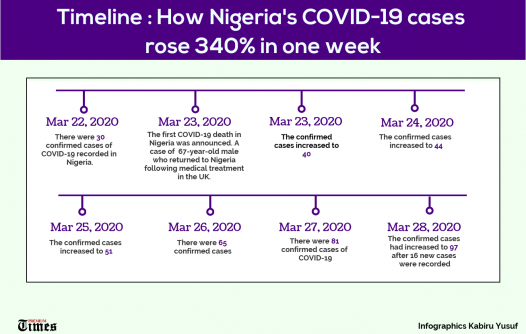 By 5:28 p.m. same day, there were 30 confirmed cases of COVID-19 after new cases were confirmed in Lagos State.

By 9:45 a.m. on March 23, confirmed cases increased to 35 after five new cases were confirmed in Abuja, Edo and Lagos. Two of the five cases were returning travellers from the United Kingdom.

On the same 23rd of March, the first COVID-19 death in Nigeria was announced. The case was that of a 67-year-old male who returned to Nigeria following medical treatment in the UK.

He had underlying medical conditions including multiple myeloma & diabetes and was undergoing chemotherapy.

By 11:00 p.m. on March 23, the confirmed cases increased to 40 after new cases were recorded in Lagos and Abuja.

Less than four hours later, the cases increased to 81 after 11 new cases were reported: eight in Lagos, two in Enugu and one in Edo.

By 4:00 p.m. on March 28, the confirmed cases had increased to 89 after eight new cases were recorded in Lagos and Benue states.

Also within the week, some high profile cases were recorded in Nigeria.

Between Tuesday and Saturday, the Chief of Staff to President Muhammadu Buhari, Abba Kyari; the Governor of Bauchi State, Bala Mohammed, Kaduna State Governor, Nasir El-Rufai; and the Speaker of the Edo State House of Assembly, Frank Okiye tested positive.

Many other top politicians, including several state governors, are on self-isolation after coming in contact with those infected.

Davido announced that Chioma has been quarantined while he (Davido) has also gone into full self-isolation for the minimum 14 days.