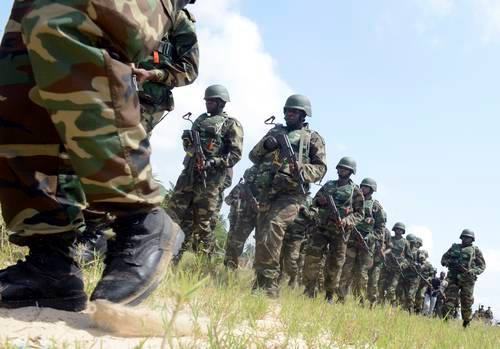 The Nigerian military has confirmed the attack on troops that led to the death of many soldiers in Gorgi, a village in Yobe State.

The military delayed comment on the attack until PREMIUM TIMES and other newspapers published reports about it.

PREMIUM TIMES reported that about 50 soldiers lost their lives after Boko Haram staged a deadly ambush on a moving convoy of troops around Alagarno in Yobe State.

Confirming the development at a press briefing, Coordinator of Directorate of Defence Media Operations (DDMO), John Enenche, blamed the massacre of soldiers on locals around the area. He said the locals leaked intelligence on the movement of troops to the Boko Haram.

Mr Enenche, a major general, said the slain troops were on their way back from Alagarno “after a successful military operation when “suspected local informants” allegedly leaked movements of Nigerian troops to Boko Haram.

The general’s statement at the press conference was circulated by PRNigeria, a public relations firm close to the Nigerian security agencies.

Mr Enenche said the terrorists used the information provided by their local collaborators to stage an ambush and shot at military logistics trucks conveying fuel and ammunition.

He said the attack on the trucks caused “massive explosions” that led to the death of 47 gallant troops of the Nigerian military.

Mr Enenche said the troops of Operation Lafiya Dole were on clearance and fighting patrol operation to Gorgi between March 21 and, 23, “which was successfully done.”

“However during a consolidation operation, they were ambushed by elements of Boko Haram Terrorists (BHT),,” he said.

“Sadly, the Nigerian military suffered some casualties in the unfortunate attack.

“However the Air Component of OPERATION LAFIYA DOLE scrambled immediately and provided Close Air Support to the ground troops.

“While the Intelligence Surveillance and Reconnaissance (ISR) platform as well as the fighter jets engaged the Boko Haram Terrorists immobilizing killing some of the terrorists and immobilizing a gun truck. Some others who attempted to withdraw were also mopped up by the jets in follow-on attacks.

“The Defence Headquarters commiserate with the families of our fallen gallant heroes who paid the supreme price in the course of defending our fatherland.

“We assure Nigerians that the Armed forces and other security agencies in furtherance of the objective of restoring peace and security in the North East and other parts of the country will continue to sustain the offensive against the enemies of our nation.”

He said an earlier video had shown a gathering of Boko Haram terrorists and their locations before they were bombarded and “totally obliterated by the air component of the operation lafiya dole.”