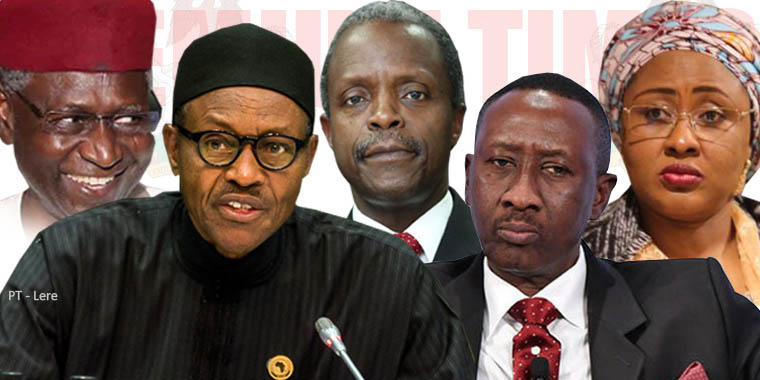 Mr Monguno’s hands-on account of a connection between Mr Kyari’s alleged ‘meddlesomeness’ and an acute spectre of insecurity that has clutched the country was contained in a series of confidential circulars he addressed to top administration officials on national security.

The NSA also accused the chief of staff of sidestepping the president’s directive to impose his own decision for implementation, a claim that social media commentary said was all but a direct accusation of treason against Mr Kyari.

The revelations, first published by PREMIUM TIMES on Monday and Tuesday, appeared to undercut an integral aspect of Mr Buhari’s response to critics: that there is unity amongst security chiefs towards a common interest of defeating fledgling terrorists and armed bandits — rather than admit apparent clumsiness and even a crack in his team.

The security chiefs have also, until now, declined to openly acknowledge a gulf so wide between them that it had become largely unworkable for them to see eye-to-eye on serious security challenges that have left the country reeling from cascading violence.

In media interviews recently, Chief of Army Staff Tukur Buratai said insecurity was being confronted across board in the Buhari administration.

But Mr Monguno’s memo showed he and other service chiefs have been taking controversial orders from Mr Kyari, despite warnings from the NSA that such practice was not only unconventional but also in violation of the Constitution.

It was unclear how the presidency has been handling the fallout from the disclosure of Mr Monguno’s memo, with Mr Kyari and spokespersons Femi Adesina and Garba Shehu dodging repeated requests for comment.

The first observation from memo is that Messrs Monguno and Kyari, two of Mr Buhari’s most powerful and worthwhile aides, are locked in a bitter confrontation amidst raging insecurity.

If there was any doubt about what was happening in Mr Buhari’s government, ample rumours have always been rife, the leaks have now shed an unambiguous insight into what has been going on. And, for the most part, Nigerians can overwhelming judge it does not augur any useful benefit to national security.

Mr Kyari has been overriding decisions already taken by the president

Perhaps the most potent of allegations raised against the chief of staff by the NSA was that he has been flagrantly discarding decisions already taken by the president to impose his own recommendation(s) on the government. It was a jarring allegation that borders on treason felony.

If the NSA’s claim is proven, Mr Kyari’s action would have made a mockery of Nigerian executive powers, which make it illegal to disobey a lawful directive of the president, on whose pleasure everyone down the executive chain of command — including members of the military and other law enforcement outfits — serves.

As an immediate step to curb further “breaches of procedure”, Mr Monguno reminded all security chiefs to stop recognising any directives from the chief of staff that do not carry the minutes of presidential decisions, or at least bear the president’s signature.

“Other than direct verbal directives from the President, written directives emanating from Mr President would be conveyed with a copy of his manuscript directive or at minimum, bear his signature,” Mr Monguno wrote in the memo.

Mr Kyari still wields a domineering influence in the administration

Since Mr Buhari settled down in office in 2015, Mr Kyari’s role as the chief of staff has made him perhaps the most-courted associate of the president, arguably more than the president’s wife and other family members.

The chief of staff’s influence has seen him exposed to some of the worst scandals of the administration. Shortly after telecoms giant, MTN, was slammed with a record fine in 2015, Mr Kyari was the one who allegedly played the middleman in negotiating the fines, a role that threw up allegations of fraud, Sahara Reporters reported.

An MTN official who allegedly played a key role in the negotiation lost her job amidst the controversy, but Mr Kyari held on to his position, even going on to take part in bigger deals on government’s behalf.

Mr Kyari’s influence was also a matter of serious concern for Aisha Buhari, the president’s wife, who has repeatedly lashed out at the chief of staff for allegedly ‘caging’ her husband and rendering her redundant in his government.

In his memo, Mr Monguno said Mr Kyari was issuing directives to service chiefs without his knowledge as the NSA, nor the knowledge of the defence minister who, by law, also has significant supervisory role over security.

It was unclear when Mr Buhari began his friendship with Mr Kyari, but there is little question that it has remained deep and robust since 2015.

When Mr Buhari was reappointed in 2019, he issued a firm ordinance to all his appointees to clear through Mr Kyari on any matter that requires presidential attention. The president did not even single out his vice-president as an exception to that restriction.

While it remained difficult to categorically say what caused the rift between Messrs Kyari and Monguno, the memo provided a hint that a contract for police equipment might have contributed to it, at least.

The contract was said to have been entered with United Arab Emirates government in 2016 by the president himself.

At the time the contract was discussed, Mr Monguno said, there as an understanding that International Golden Group, a Dubai-based defence and security dealer, was the firm favoured to land the contract, whose value was undisclosed even though security sources described it as ‘lucrative’.

Mr Monguno said Mr Kyari set aside the agreement Mr Buhari entered with the Emirati Crown Prince and decided to look for another contractor to execute the contract. This, the NSA said, was infuriating because it was capable of portraying Nigeria as an unserious ally before the Emirati government.

Mr Monguno’s letter was in December 2019, it was unclear whether the stalemate had been resolved as of mid-February 2020 when the memo was leaked.

Mr Monguno said Mr Kyari was summoning security chiefs, these usually include the chief of army staff, chief of air staff, chief of naval staff, police inspector-general, civil defence commandant, the interior minister, defence minister and a host of other agency heads, without inviting him or even informing him about it.

Foreign diplomats based in Nigeria, including even ambassadors, were allegedly holding sensitive meetings with Mr Kyari without the NSA.

Mr Monguno said the practice was ‘unprofessional’ and a deviation from decades-long convention on such meetings. He did not mention any countries’ ambassadors as taking part in those illegal meetings that could threaten Nigeria’s national security and economic interest.

It was unclear whether the ambassadors that allegedly attended the meetings knew, or should know, that such meetings were questionable in the first place.

The chief of staff is merely an aide to the president

Mr Monguno further tore into Mr Kyari by emphasising that his role as the chief of staff to the president was merely symbolic and not grounded in Nigerian Constitution and other extant laws derived therefrom.

Nigeria practices constitutional democracy in the manner of the United States. But the role of a chief of staff only became a feature of the Nigerian presidency in 1999 under former President Olusegun Obasanjo. Successive presidents have named a chief of staff, a role that quickly became a force in the hierarchical structure of government.

Mr Monguno’s argument was that the chief of staff did not swear to a constitutional oath and should, therefore, not be seen issuing directives that carry serious implications for the nation.

And when it comes to national security, Mr Kyari’s job “stops at conveying Mr President’s written directives,” the NSA argued.