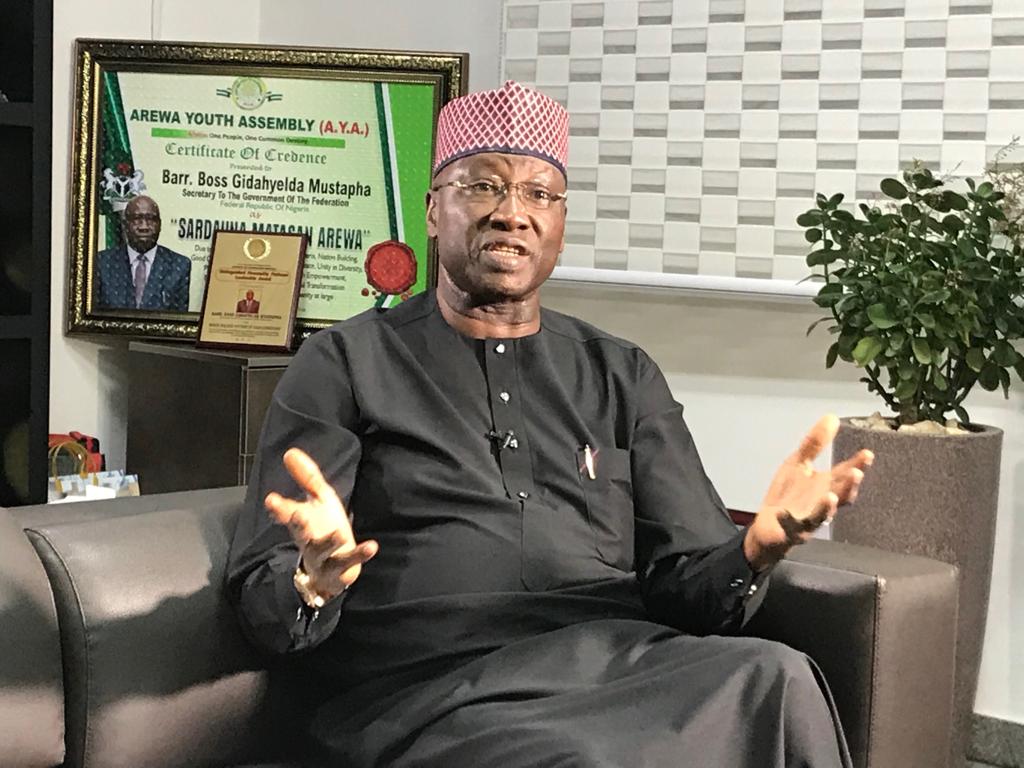 Secretary to the Government of the Federation (SGF), Boss Mustapha.

The Nigerian government on Tuesday explained why sacking the service chiefs as demanded by many Nigerians would be harmful to national security for now.

Many Nigerians believe the service chiefs lack strategies to put an end to insecurity across the country, PREMIUM TIMES learnt through a recently conducted online poll.

However, in the federal government’s defence, the Secretary to the Government of the Federation, Boss Mustapha, on Tuesday, explained why the security heads, who have served their official tenures, may not be replaced anytime soon.

“You don’t sack people like that. There are processes and I believe that, at the ‘opportune’ time, those processes will be followed. You don’t just wake up and say sack people, it doesn’t happen like that.

“We are in a very difficult time. We need everybody to be on board. We need synergy within the intelligence community; within the military formations that will help fight this war.

“We are in a very difficult situation and when we begin to create cracks and divisions, who will be the beneficiaries? The adversaries are the ones that are going to exploit those deficiencies and further the cause of destabilising the nation,” he said.

‘What needs to be done’

“At this moment, what we need is for everybody to be on the same page, fight the battle of securing the nation for protecting lives and property and ensuring that every Nigerian has the opportunity to live a prosperous life. I think that should be our main focus,” the Daily Trust newspaper reported Mr Mustapha to have told journalists at a public presentation of a book authored by a former General Secretary of the Christian Association of Nigeria, Samuel Salifu.

Meanwhile, in his description of the book titled ‘CAN, Religion and Power in Nigeria,’ the SGF said “it is a reservoir of information on the country’s past struggles”.

Also in his submission, the CAN President, Samson Ayokunle, called on the federal government to exercise its best against the insurgents and other threats to Nigerians security.

“It will be good to make sure that those in government fight violence in Nigeria. Because if they fail to accomplish a Nigeria where there is peace and security, it will be sad and it will be part of their history forever and ever,” Mr Ayokunle said.