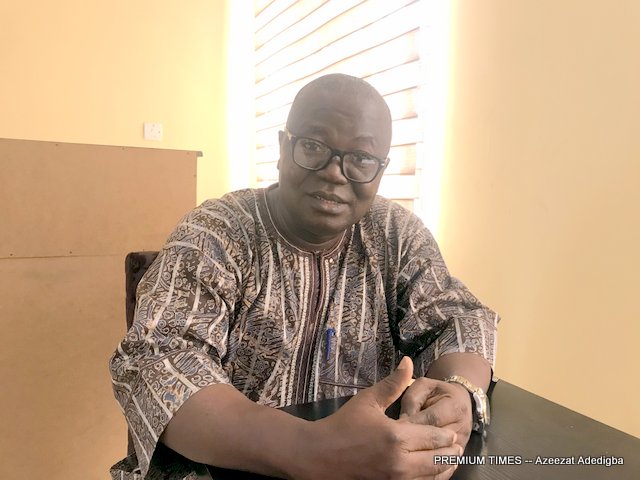 National president of ASUU, Biodun Ogunyemi in an interview with Premium Times

‘The bias is too much’, ASUU chairman condemns anti-sexual harassment bill

The chairman of the Academic Staff Union of Universities, Biodun Ogunyemi, has described as biased, the proposed anti-sexual harassment bill for higher institutions.

He said the bill will stigmatise lecturers in universities.

Mr Ogunyemi made the comment during the public hearing of the bill in Abuja on Monday.

The hearing was organised to enable individuals, civic and academic groups to air their views, raise concerns as well as suggest amendments to the bill.

The bill titled: ‘A Bill for an Act to prevent, prohibit and redress Sexual Harassment of students in tertiary educational institutions and for matters concerned therewith, 2019’, was reintroduced in the Senate on October 9 and scaled second reading on November 6.

It is sponsored by the Deputy Senate President, Ovie Omo-Agege, and 106 other senators.

PREMIUM TIMES reported in detail the provisions of the bill.

At the hearing, several participants took turns to comment on the bill as they raised concerns about it.

For the ASUU chairman, the provisions of the bill is biased against lecturers. He said if it is allowed, teachers will be discredited.

“By so doing, we shall also degrade the value and integrity of our certificate. Does ASUU supports sexual harassment? No. In 2016, we spoke along the same line.”

Mr Ogunyemi said there are other problems in the universities that need immediate attention.

While he kicked against new laws to tackle sexual harassment, he asked that the autonomy of universities should be respected and that the institutions have laws to handle such issues.

“We should reconcile this bill with that Act. What does it take to review that Act to cover our new area of concern? If we have a law that addresses issues related to sexual harassment, why are we wasting time talking about another law? Are we also going to formulate a law to address corruption in the universities?

“Are we also going to formulate another law to address sexual harassment in the police, in the National Assembly? Did we need to wait for this long for Professor Akindele to be jailed? Did we?

“This bias is too much. It’s like we are stigmatising those who should be the custodians of our innovations and progress. This bill has failed to take cognizance of extant legislation that currently deals with the issues of sexual offences.

“We need to also understand the autonomy of the university. We are saying we should not discredit our custodians of knowledge and make them lose confidence in what they are doing. Because if we do so, we will pay dearly before we recover from it,” he said.

In her speech, Jummai Audi, the Director-General, Nigerian Law Reform Commission, declared support for the bill.

She, however, expressed worry that it is restrictive to only tertiary institutions and suggested that the provisions be extended to primary and secondary schools.

She also demanded that a committee outside the institutions be set up to ensure implementation of the provisions of the bill.

Ms Audi said those in charge of disciplinary action in the universities are colleagues and in most cases, do not intervene. She further said penalties should not be restricted to lecturers but ad-hoc staff, visiting lecturers, among others. This is even as she called for penalties for students who harass lecturers.

Classification of offences into ‘felony’ is unnecessary and should be deleted, she added.

He, however, complained that the bill targets a certain group of persons and should be extended to headmasters that harass students in secondary schools.

Victim yet to collect certificate

Monica Osagie, a lady who was harassed in Obafemi Awolowo University in 2018, said she is yet to collect her certificate. This is after she exposed a randy professor, Richard Akindele, which led to his dismissal from the university.

Ms Osagie leaked a phone recording, which showed Mr Akindele asking for sex ‘five times’ from the post-graduate student for a pass in an examination.

OAU set up a committee and mandated it to submit its report. It also issued a query to Mr Akindele.

On June 20, the university announced the dismissal of Mr Akindele after he was found guilty of misconduct and in December 2018, he was sentenced to two years in prison.

In her remark, Ms Osagie stressed the need to provide a middle-man between lecturers and students.

“Instead of students interacting with the lecturer, there should be a middleman, probably a graduate, a PhD holder where the lecturer doesn’t have to interact with the students. It is not always true that students also harass lecturers.

“It was said that students maliciously get lecturers involved. That’s not possible because it always goes through a panel. The panel would find out if truly the student maliciously incriminated the lecturer. Hope you know most lecturers are in cohort with each other,” she said.

She further said she was denied her certificate for exposing Mr Akundele.