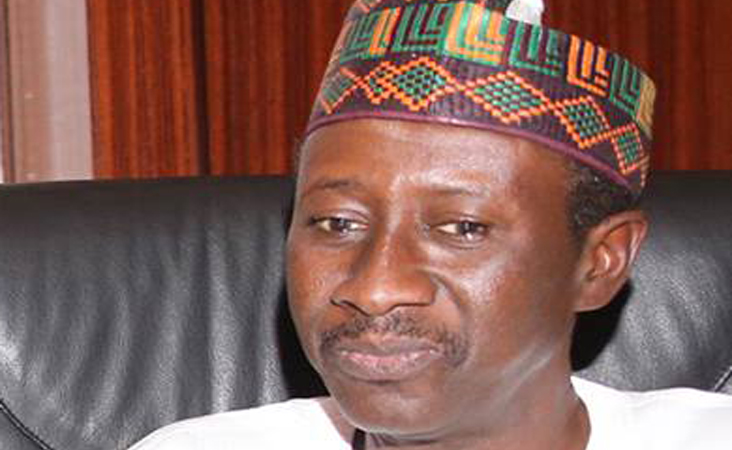 Consequently, Mr Monguno has fired a warning memo to all service chiefs to desist from taking further directives from Mr Kyari, according to a document seen by PREMIUM TIMES.

Mr Monguno said Mr Kyari’s directives to service chiefs were sometimes issued without the knowledge much less approval of the president, a practice he said has added to the government’s inability to contain insecurity.

“Chief of staff to the president is not a presiding head of security, neither is he sworn to an oath of defending the country,” Mr Monguno, a retired major-general, said in the December 9, 2019, letter.

“As such, unprofessional practices such as presiding over meetings with service chiefs and heads of security organisations as well as ambassadors and high commissioners to the exclusion of the NSA and/or supervising ministers are a violation of the Constitution and directly undermine the authority of Mr President. 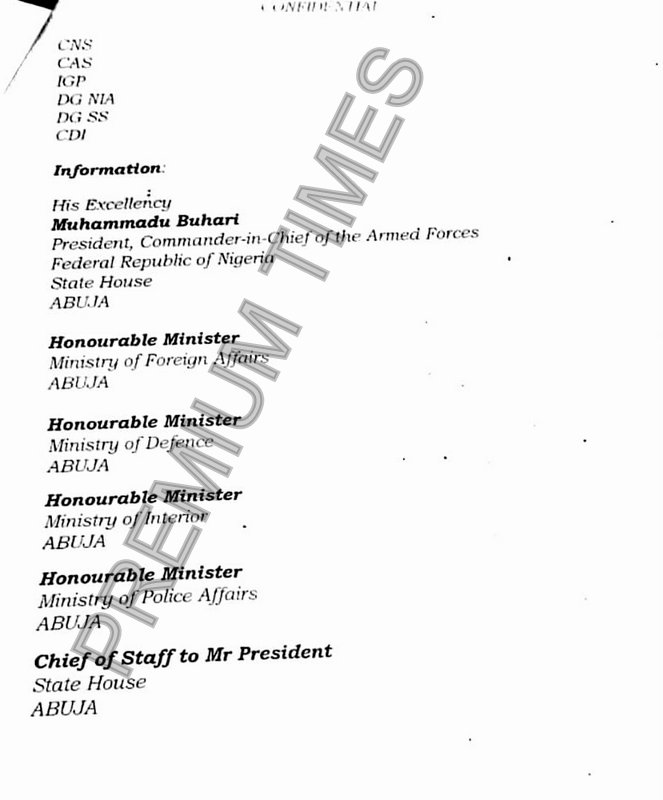 “Such acts and continues meddlesomeness by chief of staff have not only ruptured our security and defence efforts, but have slowed down any meaningful gain that Mr President has sought to achieve.”

Mr Monguno’s letter comes as insecurity returns to centre stage as a major cause for worry among Nigerians.

Violent attacks linked to bandits, kidnappers, armed robbers and vandals have continued to claim multiple lives and properties across the country.

The president has repeatedly promised to curb the crises, many of which he met in office, but has largely failed like his predecessors.

Security experts, opposition and federal lawmakers have responded by advising the president to fire his service chiefs. 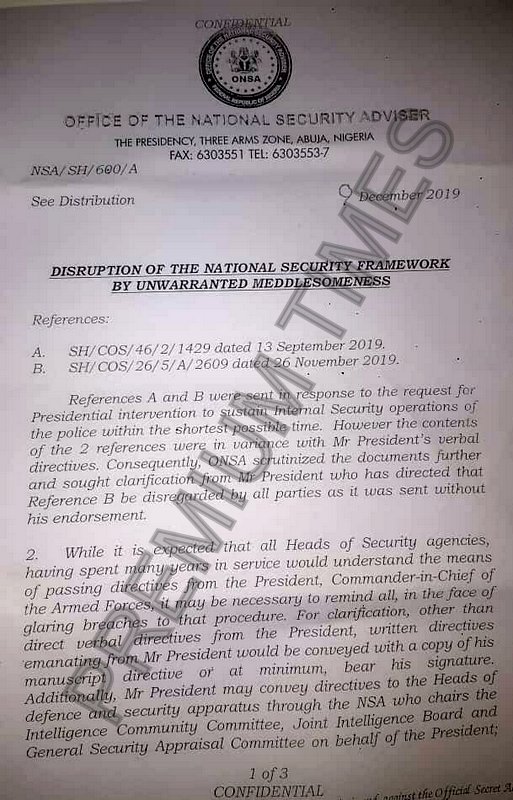 The service chiefs have been unable to rein in Boko Haram insurgents since 2015 when Mr Buhari named them to take charge of various arms of the nation’s security architecture.

While previously held swathes of land have been taken back from terrorists, deadly attacks on civilians and military targets have worsened since 2018.

The Chief of Army Staff, Tukur Buratai, said in recent media interviews that the military has degraded insurgents’ capacity to attack Abuja and other cities outside the war-ravaged northeast.

National security sources told PREMIUM TIMES on Monday that the fresh memo showed how Mr Kyari has helped in keeping the service chiefs in office despite overwhelming call for their ouster.

It also underscored the frustration faced by Mr Monguno and others who found Mr Kyari’s influence over the president too domineering for national benefit, sources said. 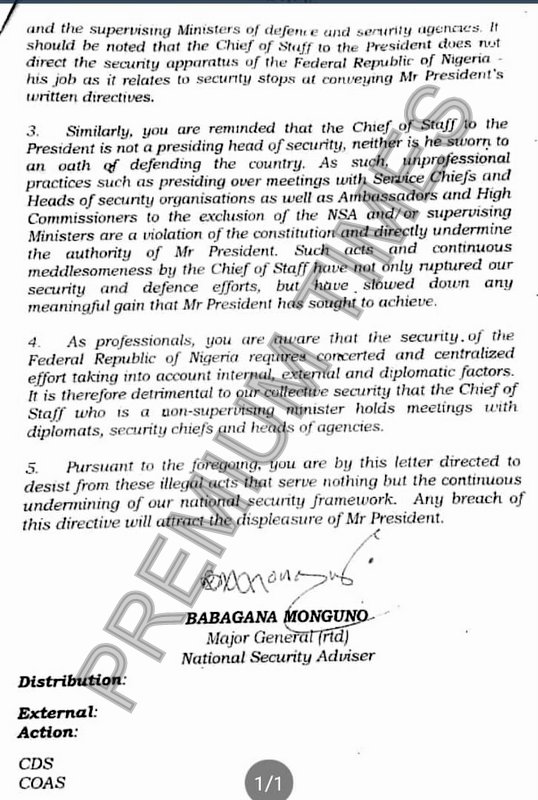 But it also speaks to Mr Buhari’s seeming inability to control his appointees. Several open confrontations have broken out amongst his senior aides for the most part of his five years in office.

In 2016, Mr Monguno became locked in a fierce rift with Lawal Daura, a former director-general of the State Security Service (SSS). Structurally, Mr Daura was a subordinate to Mr Monguno in his capacity as the overall coordinator of national security, yet for several years the duo rarely interacted with one another. The battle lasted until Mr Daura was dismissed from office in August 2018, sources said.

On another side, the president’s wife, Aisha, has also been in perpetual animosity with Mr Kyari and other close associates of the president. In late 2019, Ms Buhari publicly lampooned some of the president’s aides and family members, including Garba Shehu and Mamman Daura, accusing them of relegating her in her husband’s government.

It was unclear whether the crisis, which has brewed for several years, has been resolved several weeks after it dominated the headlines.

Mr Kyari and two presidential spokespersons, Femi Adesina and Garba Shehu, did not return requests for comments about the memo Monday afternoon.

Read below the full content of Mr Monguno’s letter, which was copied to the president and ministers for foreign affairs, defence, interior, police affairs and Mr Kyari himself.

DISRUPTION OF THE NATIONAL SECURITY FRAMEWORK BY UNWARRANTED MEDDLESOMENESS

References A and B were sent in response to the request for presidential intervention to sustain internal security operations of the police within the shortest possible time. However the contents of the 2 references were in variance with Mr President’s verbal directives.

Consequently, ONSA scrutinized the documents further and sought clarification from Mr President who has directed that Reference B be disregarded by all parties as it was sent without his endorsement.

2. While it is expected that all heads of security agencies, having spent many years in service would understand means of passing directives from the President, Commander-in-Chief of the Armed Forces, it may be necessary to remind all, in the face of glaring breaches to that procedure.

For clarification, other than direct verbal directives from the President, written directives emanating from Mr President would be conveyed with a copy of his manuscript directive or at minimum, bear his signature.

It should be noted that the Chief of Staff to the President does not direct security apparatus of the Federal Republic of Nigeria — his job as it relates to security stops at conveying Mr President’s written directives.

3. Similarly, you are reminded that the Chief of Staff to the President is not a presiding head of security, neither is he sworn to an oath of defending the country.

As such, unprofessional practices such as presiding over meetings with service chiefs and heads of security organisations as well as ambassadors and high commissioners to the exclusion of the NSA and/or supervising ministers are a violation of the Constitution and directly undermine the authority of Mr President.

Such acts and continuous meddlesomeness by the Chief of Staff have not only ruptured our security and defence efforts but have slowed down any meaningful gain that Mr President has sought to achieve.

4. As professionals, you are aware that the security of the Federal Republic of Nigeria requires concerted and centralized effort taking into account internal, external and diplomatic factors.

It is therefore detrimental to our collective security that the Chief of Staff who is a non-supervising minister holds meetings with diplomats, security chiefs and heads of agencies.

5. Pursuant to the foregoing, you are by this letter directed to desist from these illegal acts that serve nothing but the continuous undermining of our national security framework. Any breach of this directive will attract displeasure of Mr President.